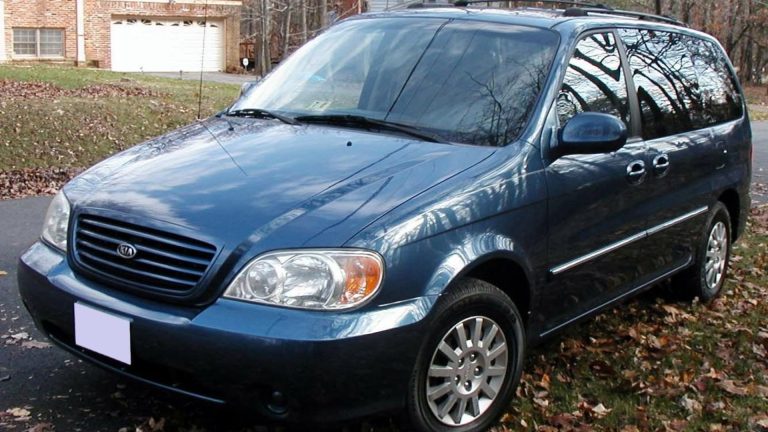 For someone on the used car market, the Sedona makes a more than decent everyday ride, especially if you are looking to get the utmost usability and a large cargo area. Well, the only thing that could get in your way is to buy a problematic model year. That’s why our team wanted to give you a heads-up about Kia Sedona years to avoid, based on drivers’ experience, customer reviews, and NHTSA reports.

Before we get into the main issues that Kia Sedona had as a model, it’s important to know that it’s overall a rather reliable car. It’s perfectly normal for a car that was in production for over 20 years to come with a few drawbacks. Still, it’s not something that would cause engine rebuilds or transmission failures, and that’s a good sign.

There were some performance-related issues with some Kia Sedona model years, but these were mostly related to the crankshaft position sensor. The failure of this sensor could lead to a jerking motion while driving and a sudden power loss, and replacing the sensor usually fixes the power supply.

Also, there were some issues with the peeling paint and rust for certain model years, as well as the door handles and hood latch. There were some major recalls regarding the automatic transmission shift lever position and electrical issues with the alternator and improperly tightened battery terminals.

One of the most troublesome issues that you may experience with the Sedona is a sudden lack of acceleration and even engine stalling. As mentioned, it could be due to a bad crankshaft position sensor that measures the rotation of the crankshaft and submits information to the engine control unit.

If the information isn’t correct, the engine timing could be off, therefore leading to poor performance and power loss. Also, some drivers experienced odd startup noises or rough idling, and the problems seemed to be in the wrong oil level readings on the dashboard. Luckily, this issue was mostly caused by the failed sensor, instead of a true oil leak.

While it’s not a major issue that could cause problems for drivers, the second-generation Kia Sedona had a few problems with the paint. It seems that the paint coat didn’t last very long, and there were some peeling issues and even rust forming on the hood and around the door area.

These issues were the most prominent for the 2005 and 2006 model year of Sedona. Of course, it doesn’t affect the driveability, but it could turn into a serious issue if the paint coat needs to be re-applied for aesthetics. Also, other issues about the car’s construction include a faulty hood latch that sometimes left the hood open even though drivers tried closing it, as well as faulty door handles.

There was an official recall regarding this issue and Kia managed to fix the problem on most of the 2016 model year Sedona vehicles.

Luckily, there was also a recall by Kia regarding these electric issues and poorly tightened battery terminal connections for the 2020 model.

Which Kia Sedona years to avoid?

The most serious problems with Kia Sedona vehicles included safety concerns such as a fire hazard issue and the faulty transmission column shift. However, these issues were mostly sorted out with the mentioned recalls and the rest of the problems are easily solved by replacing the faulty sensors and wiring harnesses.

Still, some model years are more problematic than others, so here’s how it all looks like depending on the Kia Sedona generation:

While the first production year of any model is often among the most problematic, the issues with first-generation Sedona only started in 2002. After the inception of the model in 1998, Kia didn’t face many driver complaints until the 2002 and 2003 models.

These two were quite problematic due to fire hazard concerns and poor engine performance caused by the malfunctioning sensors. On top of that, the first-generation Sedona mostly requires costly repairs to these issues, especially considering the dropping price of the model. So, it’s best to go with the 2004 model year, or the first few production years of the Sedona.

The second generation of Kia Sedona was overall reliable with only a few problematic model years from 2005 to 2013. Most notably, drivers have expressed worries about the fire hazard caused by the wires that spread under the driver’s seat.

On top of that, there were reported issues with the poor seatbelt assembly, and this one represented a major safety concern. Namely, seatbelts didn’t offer enough restraint power in case of a collision, causing a potentially dangerous situation. After the 2005 and 2006 model years, there was the 2012 model year with poor safety ratings from the NHTSA and poor electrical installations and wiring.

When it comes to the third generation of the popular minivan, there weren’t many reported issues except for the 2016 model year. This model year suffered from electrical issues the most, and some of these represented safety hazards while driving.

The headlight assembly was prone to failure and the blinker lights didn’t operate properly, which was a problem that’s difficult to notice if you are behind the steering wheel. There were also numerous recalls by Kia including the one for replacing the wiring harnesses for the occupant detection system, and turn signal malfunctions.

The fourth generation Kia Sedona started its production in 2020 as the Kia Carnival, but the car was still known as the Sedona on some markets. The starting production year had a fair share of issues that resulted in official recalls regarding poor battery connections and corroded battery terminals.

If serviced correctly, Kia Sedona is a minivan that will serve you great both for everyday driving and for situations that require a vehicle with a slightly higher load capacity. However, you can reduce the risk even more by avoiding the mentioned model years, and going with the recommended production years such as the following:

The first-generation Kia Sedona didn’t have many issues in the first four production years, so you won’t have to worry about the fire hazard and poor performance issues by going with a 1998 to 2001 model. The second generation was among the most reliable as long as you avoid the 2005 to 2006 model years, and problems with the safety hazards and wiring for the 2012 model have been solved through recalls later on.

Is Kia Sedona worth buying?

If you are looking for the general answer, yes – Kia Sedona is a reliable minivan that’s worth buying on the used car market. There weren’t many major problems with the car in the current generation, also known as Kia Carnival, and most of the previous-gen issues were sorted out through recalls.

What year should you avoid Sedona?

What problems do Kia Sedonas have?

Kia Sedonas have issues with the electrical wiring harnesses, fire hazards concerning the wire below the seats and the alternator, and issues with the crankshaft position sensor causing power loss.

Is a Kia Sedona reliable?

Yes, Kia Sedona is a reliable car as long as you avoid the problematic model years listed above.

Do Kia Sedonas have transmission problems?

Kia Sedonas have a problem with the automatic transmission shift lever that falls out of place and creates a rollaway risk on 2016 Sedona vehicles.