What can damage an alternator? 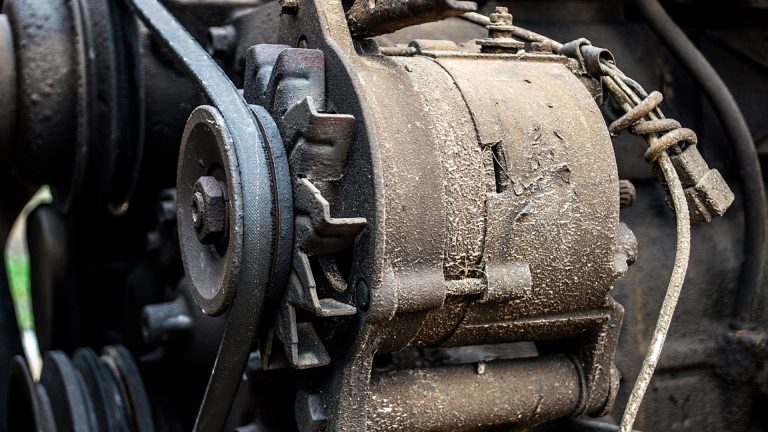 The alternator supplies direct power to most of the electronic components of a car. These components include the radio, electric steering, windshield wipers, headlights, and heated seats.

Driving with a bad alternator will cost you your car battery. To avoid being stranded due to alternator problems, you need to know what can damage an alternator to prevent it.

A common practice that damages the alternator is a charging system overload with too many accessories. Wrong use of jumper cables, leaking fluid, and a tight belt are other things that damage the alternator.

This article will explain how the alternator works and the damage it can suffer. We also give tips on maintaining your alternator and getting it to perform optimally.

How does the alternator work?

The alternator consists mainly of the diode, rotor, and stator and goes together with a voltage regulator. It is responsible for keeping your car on the go when the engine is running. It charges the car’s battery and supports most electronic components running when the vehicle is moving or idling.

The main aim of the alternator is to turn mechanical energy into electrical energy. When on, a car’s engine powers a drive belt on a pulley attached to the alternator. The alternator’s motor shaft gets pulled by the pulley, spinning a set of magnets around a coil.

The spinning magnets generate an alternating current which the alternator’s rectifier receives and converts to direct current. It is this direct current that triggers the electrical system of your vehicle.

How long does an alternator last?

Alternators last between 80,000 and 150,000 miles on average. As such, you must replace your alternator every seven years, whether it has a problem or not.

However, many different factors, such as its quality, the number of electronics used, and the vehicle’s general condition, can affect your alternator’s longevity, causing you to need to replace it sooner. Getting the correct quality alternator and keeping proper driving habits with regular maintenance might save you from the issues of a failing alternator.

What can damage an alternator?

Different practices and issues can damage the alternator. The common ones are:

Overloading the charging system with accessories

When too many run simultaneously, the alternator must charge the battery at the maximum rate. If this happens for prolonged periods, the alternator will overheat, causing the connections inside the unit, the stator windings, and the diodes to fail from heat damage.

Sometimes,  it is not using many gadgets at once that overloads the charging system. Getting bigger and more powerful aftermarket gadgets like the car stereo and alarms can cause the overloading of your alternator. Therefore, when getting aftermarket accessories, pay close attention to your vehicle’s capabilities and buy accordingly.

Jumper cables come in handy for battery emergencies. When your car refuses to start, you can use jumper cables to get it running with the aid of another vehicle.

Some battery brands have different positions for their battery terminals. It is easy to connect the jumper cables wrongly when getting emergency help from a driver whose battery brand is different from yours in design.

Ideally, the battery should only start if the jumper cable is in the right battery terminal. In cases where it does start, the diode rectifier can get blown.

First, the diode blocks electric current from one side, allowing only DC current to move out. If the battery is in an inverted position, the ground current will flow from behind the diode, which will not block anything as it is in reverse.

With the starter button on, there is a high risk of the diode burning as the current flows with no load. When the diode burns, you will see a thin puff of smoke around the alternator area. Continuous vehicle usage with a burnt diode will negatively affect your engine and destroy your battery.

Damage from water is less compared to that of oil as the alternator is protected from elements like rain and splatters from deep puddles. Nonetheless, leaving the alternator seated in deep water can damage it if it is not dried quickly and correctly.

The alternator has a seal that protects it from most leakages. Prolonged use of the seal without replacement will cause it to lose its potency and allow oil leaks from the engine to get into the alternator.

Aside from alternator seal failure, oil leakage due to leaking valve cover gaskets can damage the alternator. Just replacing the alternator will not work in this case, so you have to ensure that there are no leaks that will cause your new alternator to fail before installing it.

The alternator belt, commonly known as the serpentine belt, can damage your alternator when it is too tight.

The serpentine belt is an accessory belt that links the engine’s components, including parts such as the battery, alternator, and generator. It has to be tight enough to encourage cooperation between these technical components.

However, the engine will overheat if the serpentine belt is too tight. The alternator’s bearings get affected by this immense heat and wear off quickly.

A loose serpentine belt is also a problem for the alternator as it causes overheating. This time, the heat comes from an inadequate water supply through the engine due to poor energy transfer to the water pump bearings.

How do I know my alternator is failing?

Driving for extended periods with a failing alternator can affect your engine. That is why it is essential to observe your alternator so you can arrest the situation on time when it fails. Here are six symptoms of a damaged alternator:

Your battery can be dead either because it has reached the end of its service life or because of an alternator malfunction.

A lousy alternator speeds up battery death as it would not charge the battery sufficiently while the engine runs. The result is a faster depletion of charge by the battery than usual.

Over bright or dim lights

A damaged alternator gives off inconsistent voltage, which can cause electronic accessories to over- or under-perform. One of the most common ways you can tell this is when your headlights are incredibly bright or too dim. Sometimes, they may flicker or erratically switch from dim to bright and vice-versa.

Aside from the headlights, you can notice this voltage inconsistency in the difference in the operation of other accessories. They will become slow or cease to work entirely, or go haywire.

If your vehicle stalls frequently while you’re driving, it may be that the spark plugs are not getting enough power from the alternator. If you have problems starting the engine, it may be that your alternator is not charging it.

Smell of burning wires or rubber

The alternator belt sits close to the engine and is under constant tension and friction. When it is worn deep, it will emit a burning rubber smell. If it is being overworked or has damaged wires, you will perceive the foul odor of burning wire.

When the belt that turns the alternator’s pulley gets misaligned, you will hear whining noises from under the hood. You will also get this sound when the bearings that spin the rotor shaft get bad. At times, the sound may come out as a growl.

Since the battery and alternator operation are closely mutual, a warning light may indicate alternator problems.

How do I maintain my alternator to keep it at optimum operation?

The first step towards maximizing your alternator’s potential is to ensure it gets plenty of airflow. The airflow will reduce the risk of overheating, which causes the alternator to wear out faster.

Keep the engine compartment clean. The alternator sits close to the engine, so dirt from the engine can easily find its way to the alternator and coat its components, increasing the risk of overheating and corrosion.

Regularly check for corrosion, excessive wear, and belt alignment of the alternator. If you see black dust around your engine area or alternator, take it to your auto mechanic to check for problems.

Above all, sticking to a regular car maintenance schedule with a professional will do you a lot of good, as problems will be identified and dealt with before it’s too late.

Alternator failure is not a common issue for the first four years of a vehicle. But when it happens, it can be misleading, tiring, and expensive.

Practices such as using too many accessories at a time and wrongly operating the jumper cable will damage your alternator. Also, paying little attention to your vehicle to know when the serpentine belt is too tight or when there is a leakage can cost you your alternator. We advise that you devise and stick to a regular maintenance schedule to ensure issues are arrested on time before your alternator fails from the strain.

What would make an alternator go bad?

Several factors make the alternator go bad, and most of them boil down to overheating and overload. Using too many accessories at a time or over-powerful aftermarket accessories are common causes of alternator failure.

Alternators can fail suddenly or slowly with time. The most common cause of sudden alternator failure is a problem with the bearings.

What is the common problem of alternators?

The common problems of alternators range from mechanical issues, such as faulty pulleys and collapsed rotor bearings, to electrical situations, such as faulty rectifiers and damaged windings. It would be best if you found the primary cause of the issue before replacing the alternator.

Can water damage an alternator?

When the alternator is left in deep water for some time and not dried properly, it gets damaged from the moisture. The water disturbs the operation of the alternator and opens the way for corrosion to step in.