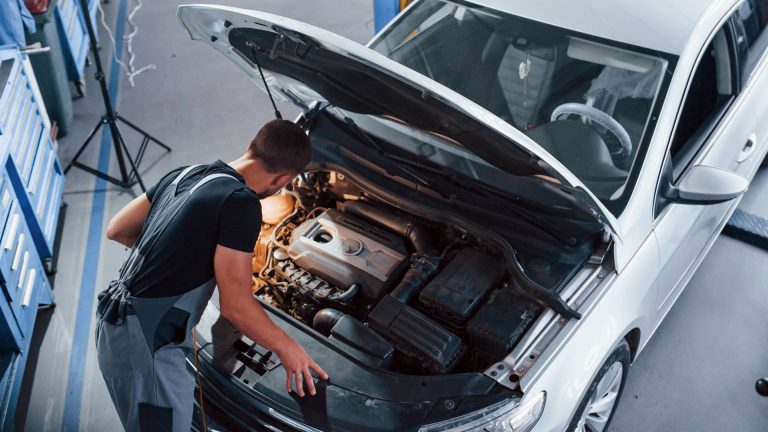 Enjoying your ride can sometimes get difficult suddenly if you experience burbles and vibrations while standing at the traffic light. Idling is a state where your engine and transmission aren’t connected, and you are standing still with the engine running.

However, with a car idling rough, you might spot some vibrations and revolutions per minute (RPMs) fluctuating. It can get quite disturbing since the RPMs should be on a stable level unless you are pressing the gas pedal. To help you with this dilemma, our team prepared this guide with the main reasons behind rough idling and its consequences for your engine.

What is rough idling and can it cause engine damage?

Rough idling occurs when your RPMs go up and down while stationary, often as soon as you start your engine before putting the transmission into gear. However, it can also occur during the drive as you come to a stop at a traffic light.

It’s unusual for the RPMs to fluctuate if your transmission is out of gear and you aren’t pressing the gas pedal. So, if rough idling occurs, it’s a problem with the improper air/fuel mix and bad combustion. It either has to do with problems in the fuel delivery system, or air delivery system, while it can also be caused by other combustion issues.

While rough idling itself doesn’t pose any danger for your engine, the reasons behind it just might. So, it’s crucial to find the source of the trouble and replace the faulty component. if you leave your car as it is, not only will you sense these bothersome burbles while idle, but your engine might suffer from bad combustion as well.

If the rough idling problem gets worse, it might cause some wear and tear damage to the cylinders in a long run. So, it’s best to deal with the issue as soon as it occurs, so let’s dig deep into the reasons.

One of the most frequent reasons behind rough idling is a bad spark plug, and these plugs have a crucial role in lighting up the combustion mix. They need to be replaced to ensure the explosion consistency in the chamber, so if they wear off, the consequence can be seen in form of rough idling.

Among the remaining main causes of rough idling, these are the most common ones:

The remaining possible reasons behind rough idling include a bad Exhaust Gas Recirculation valve (EGR) and a bad positive Crankcase Ventilation valve (PCV). The EGR valve controls exhaust gas emissions and reduction, but it shouldn’t operate when the car is idle.

It messes with the exhaust gas measurements and leads to rough idle or engine stalling. The PCV valve removes unburned gasses from the cylinder and leads them to the crankcase. The valve is inside the engine and it can sometimes get clogged and lead to a lean condition. It means there’s much more air in the mix than fuel and it could affect the combustion even while idling.

So, the engine struggles with combustion, and rough idling isn’t the only bad thing that could happen. You’ll also notice the difference in fuel consumption and even engine misfires. Your car might even have problems starting, and cleaning fuel injectors could help get your RPMs back to normal when idling.

Another reason among the most frequent triggers of rough idling is a vacuum leak. The vacuum system consists of hoses and channels which help with the air intake necessary for combustion. That’s why vacuum leaks can cause serious problems, including rough idling.

The leak can occur anywhere in the air intake system of the car, including the hoses, gaskets, and intake boot cracks. Plastic and rubber hoses and seals are also known to degrade and cause vacuum leaks. It also causes improper combustion mix and along with rough idling, you can recognize it by the air hissing sound when stepping on the gas.

A clogged or dirty air filter could also result in air intake difficulties, which again tampers with the air/fuel ratio in the combustion chamber. If the air filter appears to be black and dirty, it will block the air intake and this could lead to RPM fluctuations while idling.

While the air/fuel mix gets affected by a dirty air filter, it can also fail to keep external particles out of the combustion chamber. This only lead to further combustion difficulties, so you should check the air filter as soon as you face rough idling.

A bad fuel pump could also be the culprit since it’s the part that sends the fuel from the gas tank into the fuel delivery system. The pump could fail for numerous reasons, including contaminated fuel or even overheating in case there’s not enough fuel in the tank to keep it cool.

If the pump fails, it might send too much fuel toward the injectors resulting in a rich condition for improper combustion. Not only would it cause rough idling, but it would also lead to leftover fuel retracting through the exhaust.

Oxygen sensors are often placed just before and right after the catalytic converter, to measure the amount of leftover oxygen in the exhaust system. The engine control unit (ECU) uses this information as well as the readings from the mass airflow sensor to calculate the amount of air that reaches combustion chambers.

So, if these sensors fail, the amount of air could be too low or even too high for proper combustion. It can be sensed through rough idling and problems starting the car.

Ultimately, if you notice your car idling rough, it can be an indicator of a serious problem that could eventually lead to engine troubles. That’s why you should act as soon as you notice the symptoms of rough idling and try to find and replace the part that’s the root cause of the trouble.

Hopefully, this guide can serve you well in finding the reasons behind rough idling and getting your idle RPMs back to normal as soon as possible.

Why is my car idling rough and shaking?

Your car is rough idling and shaking due to bad spark plugs or faulty components in the air intake or fuel delivery systems.

Can rough idle damage the engine?

Rough idle can only damage the engine in case it starts happening continuously and the RPM fluctuations hurt the cylinders. However, the reasons behind rough idling could result in engine damage if you don’t replace the faulty components on time.