Car is overheated and won’t start – causes and fixes 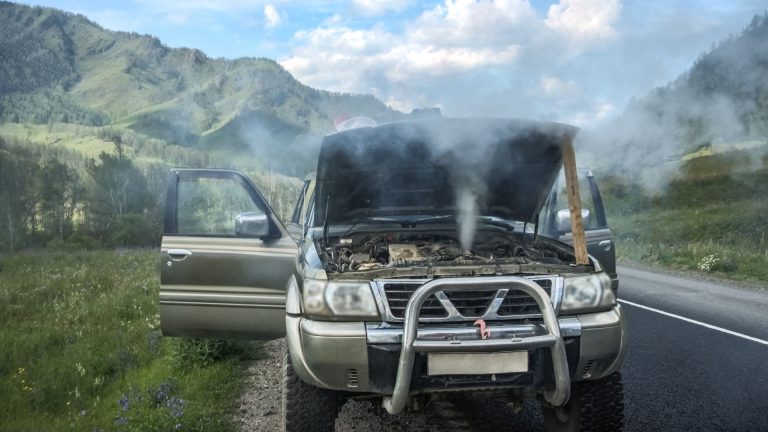 The worst thing that could happen to you while driving is engine overheating, and simply seeing the temperature scale going up can give you goosebumps. If the car is overheated and won’t start again, you probably have compromised engine components like cylinder heads, belts, and hoses.

In the worst-case scenario, the engine’s head gasket was blown and you’ll have some serious repairs to do. Still, you can learn all about the engine overheating issue in this guide, as we’ll elaborate on causes and fixes.

However, several other reasons might lead to the overheating issue. Here are some of the most common ones:

The best way to prevent having a damaged engine is to follow your temperature gauge. If it starts fluctuating too often and leans towards the “H” mark standing for hot temperature, you should get the car checked.

If you have a faulty water pump, your car might struggle to start due to overheating. The pump keeps the coolant flowing through the engine. Once the radiator cools the liquid by blowing air over it, the pump ensures that the coolant circulates further in the system.

If the water pump gets damaged, the heating process won’t be effective in cooling the engine. If this happens, you’ll notice a coolant leak, or even steam coming from the radiator.

Problems with the radiator

As mentioned, coolant leaks are quite frequent when it comes to engine overheating issues. However, there are other components of the cooling system as well, and you should look into these including the radiator issues.

The radiator is an essential part of your car’s cooling system as it leads away the hot air from your engine. The water and coolant liquid is released from the radiator to cool down the engine. During that time, the radiator also blows air over them, resulting in cool air being released through the engine.

If your radiator doesn’t work or is affected by a layer of dirt and debris, the coolant won’t be able to cool down the engine. So, that’s why a damaged radiator can cause your car to stop and make it more difficult to start again.

The problem can also be caused by faulty engine components like belts and hoses. Belts serve to send the power from the engine to other accessories, while the hoses help in directing the coolant. If these components aren’t working properly, engine cooling won’t be as efficient.

Also, the belts are crucial for an operating engine, and if these are not changed timely, the engine could be compromised. It could cause the overheating issue, as well as the issue with the bearings which could result in engine failure.

Oil leaks can cause serious trouble

Even if you aren’t a car guy, you’ll notice how often mechanics refer to oil leaks as the biggest threat to the engine. So, if you are low on oil, or there’s a leak in the system, your engine can overheat. Without enough oil, the inner components of the engine won’t operate so smoothly.

If there’s too much friction, chances are that one or more engine components will get damaged and the engine won’t work properly. You might also hear humming and grinding noises due to the friction between the parts, and that’s a signal you’ll need to get your oil checked.

Some of the clear signs of an overheating engine are frequent temperature raises, smoke coming out from the hood, and a bad odor in the cabin. Especially if the temperature gauge in your car starts rising quickly, it could lead to an engine overheating.

In case there’s an oil leak, you might sense a burning smell, while the coolant leak could cause somewhat of a flowery scent. If you notice any type of smell coming from the engine area, you should stop where it’s safe to check the temperature and engine oil level.

How long should I wait to start my car after overheating?

You should wait at least about 30 minutes before trying to start your engine again in case of an overheating. It takes some time for the engine to cool down due to the high temperature which led to the overheating issue.

You shouldn’t try to start the car immediately after an overheat, and it’s best to wait until it cools down completely. A period of around 30 minutes should be enough so you can drive to the nearest mechanic.

What happens when your car overheats and shuts off?

If your car overheats and shuts off, don’t try to start it right away, and don’t open the hood until the engine cools down. You can turn off all the features that put stress on the engine such as the climate control option.

Furthtermore, you can just use the temperature setting and turn it towards hot air. Because of this, you might be able to temporarily draw the heat from the engine and relieve it a bit. Once the engine cools down, you can inspect the engine oil levels and look for any coolant leaks.

Can a car be fixed if it overheats?

Yes, a car can be fixed if it overheats, but it could cost up to $1500 or even more in case you have to repair the engine completely. It all depends on the component that led to the overheating in the first place, so it’s always worth checking out with the mechanic.

If you just have a broken thermostat or damaged hoses, it will be more affordable to fix. However, in case your head gasket gets blown, it’s one of those scenarios that will be quite expensive to repair.

How do I know if my engine is damaged from overheating?

If your engine is damaged from overheating, you’ll be able to see the warped and deformed metal components. If you don’t have much experience yourself, you can examine the car at the mechanic’s, and a damaged cylinder could cause the head gasket damage.

All of the deformations in engine components can lead to oil leaks and it can be devastating for your engine if you don’t get it checked.

Overall, if your car is overheated and won’t start, you should take the matter seriously. Immediately stop the car and don’t open the hood just yet, to avoid getting burned by the heat. Instead, try to wait about 30 minutes for the engine to cool down, and start it again.

This way at least you’ll be safe and you might reach the nearest mechanic. Even if your car seems to work properly after an overheating, make sure to drive carefully and keep an eye out for the temperature gauge.