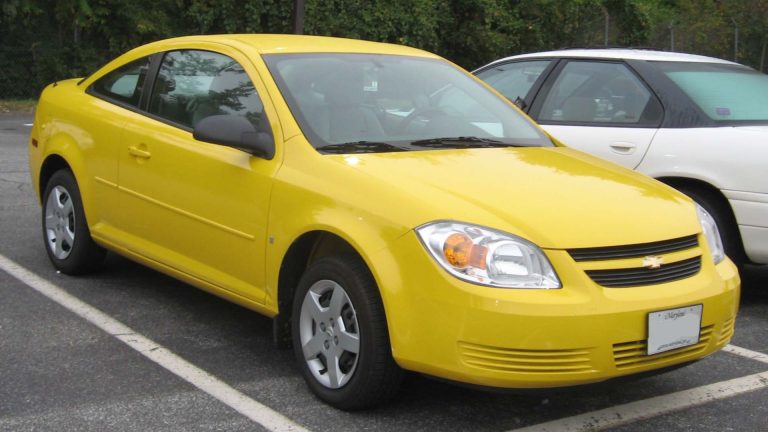 The Chevy Cobalt has to be one of the best bang-for-buck vehicles around. The compact car is surprisingly inexpensive but offers the kind of performance you would expect from an expensive competitor.

Its price and performance notwithstanding, there are some Chevy Cobalt model years to avoid for safety concerns and your pocket’s sake.

The Chevy Cobalt is riddled with problems. If you are getting one, you need to know the issues to expect, so you can plan your maintenance schedule accordingly and prevent some of them. Below are the most common Chevy Cobalt problems.

The combination signal switch assembly is used to adjust the intensity of headlight beams. When the assembly goes bad on the Cobalt, most of the Cobalt’s headlight functions will cease to work. Also, the turn signal would not turn off after you’ve turned the wheel.

Aside from being a hindrance to visibility at night, the turn signal refusing to go off after the turn can confuse other drivers and, in a few extreme cases, cause a miscalculation of moves. To resolve this problem, you have to replace the combination switch, which costs about $166 for this operation, including labor.

Many Cobalt drivers experienced a frequently flashing check engine light accompanied by a rough engine. Subsequently, the Cobalt would misfire when accelerating and, in severe cases, cause the engine to shut down while in motion.

While replacing the ignition coil, it is also necessary to replace the spark plugs, as they could have been affected by the problem. It would be best if you endeavored to repair this issue early and not take measures to manage the situation for longer.

The timing chain tensioner regulates the tension surrounding the crankshaft and camshaft sprocket, ensuring it is always correct. It prevents the chain from rattling and falling off the sprockets, making it run properly.

From its role, we see that the timing chain tensioner is essential to the engine. When it fails, the valve timing becomes erratic, and engine problems follow rapidly afterward.

Many Cobalt drivers reported hearing the timing chain rattling whenever they cold-start the vehicle. It affected many of the 2005 to 2010 models severely. To prevent spending so much on repairs or losing your engine, you must address this issue as soon as possible.

The role of a gas cap is to prevent fuel vapor from leaking out of the filler neck. It is also a shield that protects the fuel within the car from getting contaminated by mud or dirt. You could drive without a gas cap but at the risk of losing your engine.

Some Cobalt drivers reported smelling fuel around the car. The check engine warning light was also illuminated when this smell was present, indicating a problem.

Before you decide that replacing the cap is the best course of action, conduct an intensive inspection of the gas cap and its components. Check for damage on the seal and how well the cap ratchets and tightens. Also, check for corrosion around the fuel filler.

It would be best if you got a mechanic to do this inspection for you and give expert advice. Sometimes, it is not the gas cap you must worry about but the fuel filler neck.

The shifter cable is responsible for setting the transmission in the proper gear according to driver engagement. The symptoms you will face if this cable fails depends on what kind of transmission you have.

For the Cobalt, a problem with the shifter cable will cause the car not to shift into the selected gear, and the ignition key will not leave the ignition key cylinder when the vehicle is in park mode.

Chevy inserted a clamp on the cable to prevent the issue for affected models, which benefited from its recall. In severe cases, the line may need to be replaced before the preventive procedure is done.

Which Chevy Cobalt years to avoid?

Some drivers would rather stay away from the Chevy Cobalt completely, but only some of its models are terrible. The models you should avoid are given below.

Chevy had good intentions for the Cobalt, manifested in what was promised on the vehicle. However, when you get past the nostalgia of the services you are offered for such a low price, you find many issues hiding underneath.

The first model for the Cobalt was not so enticing. It had over 1,000 complaints and six recalls. It was intended to be a fresh start and a replacement for two other vehicles Chevy discontinued, but it did not quite match the beat.

Drivers remember this first model for its frequent power steering problems, which scares most drivers. The power steering motor was defective, causing drivers to lose power while driving. Most times, this loss of control caused an incident or, in some unfortunate cases, an entire accident.

Furthermore, the key of the 2005 model often got stuck in the ignition, adding to drivers’ frustrations. The model was labeled one of the Chevy Cobalts you should never consider getting, even as a present.

The 2006 model followed in the footsteps of the first one, amplifying the issues the 2005 model suffered from. It had greatly as many complaints and an additional problem – a faulty automatic transmission shifter.

2007 Chevy Cobalt came with improvements but still carried the problems of the 2005 and 2006 models combined. It had fewer complaints than the 2006 model but is not a vehicle you should consider driving around for your safety. Just like the first two models; it was a safety hazard on its own.

2007 Cobalt also had engine problems that cost up to $800. When the 2008 Cobalt appeared, drivers noticed a genuinely remarkable improvement for Cobalt.

Drivers who rode the 2008 Cobalt had many severe complaints about its transmission. Its key also got stuck in the ignition, but not for the same reason others did. Though the 2008 model is less dangerous than the other three, it is still unsafe and should be avoided.

General Motors issued many recalls for most of these first-generation Cobalt models. But despite the recalls, avoiding the 2005 to 2008 model years is best for your safety and the public.

The Chevy Cobalt suffers from a lot of bad rap. That, however, does not mean that all the models in its production line are terrible. Here are the best model years for Chevy’s Cobalt.

These two Cobalt models have pretty good reliability ratings. 2009 Cobalt delivered an above-average performance and did not have the kind of severe issues the older models did.

The 2010 Cobalt is the best model so far. Unlike the 2009 Cabin, which only delivered on performance and lacked exciting aesthetics, the 2010 model was the complete package delivered right. It also had great fuel economy and an enticing driving experience.

However, many drivers had entirely given up due to the many errors of the older Cobalt models. When the 2010 model came along, only a few drivers were interested. Chevy discontinued its production after this model due to poor sales and interest.

Is the Chevy Cobalt worth buying?

If you can get a hold of the 2010 Chevy Cobalt, you will have struck gold for a low price. It is the best Chevy Cobalt model and does not have many issues. The vehicle will last about 200,000 miles or more with proper maintenance.

Aside from the 2009 and 2010 models, the Chevy Cobalt is not worth buying. It packs more problems than service, and these problems are often in severe forms. It is a safety hazard with a non-reliable driving experience.

Is Chevy Cobalt a good car?

The Chevy Cobalt is a good car if you know what model to get. With the right model, the performance you would get is a steal compared to its price.

Is Chevy Cruze better than Cobalt?

The Chevy Cruze is considered to be a better vehicle by most drivers. It was launched as a replacement for Cobalt and has gotten a better reception than Cobalt. It costs more, but when considering factors such as safety and reliability, the Cruze is worth its price.

Is Chevy Cobalt a safe car?

Most Chevy Cobalt models are unsafe. The only safe ones are the 2009 and 2010 models, which do not follow the trend of severe problems the older models share among themselves.

Why did General Motors discontinue the Chevy Cobalt?

Poor interest is the reason GM discontinued Chevy Cobalt. Cobalt presented fewer problems than some other vehicles. But since it lost drivers’ interest, it made sense to discontinue the line, as continuing with it would have produced poor results for sales.