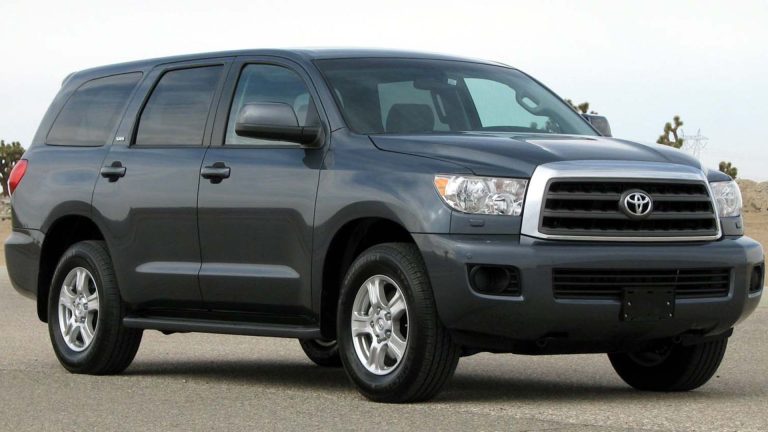 The Toyota Sequoia is best known for its unique blend of luxury and capability with a hard-to-beat design package. The luxury SUV offers a lot of adventure with its features and an internal system designed to give the best performance for any path you choose.

Though Sequoia is widely associated with reliability and excellence, some of its model years do not quite deliver on the promise. This article reveals the Toyota Sequoia years to avoid and which ones you should focus on for a purchase that’s worth it.

The Toyota Sequoia has many enticing characteristics, making it a popular option for drivers looking for a family vehicle. However, before making a purchase, it is essential to know what kind of problems the car is prone to developing. Despite its durability and reliability, Sequoia has its share of problems.

Here are the most common problems you can expect a Toyota Sequoia to develop.

Many drivers complain about the lower ball joint problem the Sequoia develops often after 11,000 to 20,000 miles. Eight models of the Sequoia were heavily afflicted with the problem to the point where Toyota had to issue a recall campaign for five of them to fix it. The problem was caused by manufacturing defects which initiated a premature wearing of the lower ball joint.

Worn lower ball joints are a safety hazard as the lower ball joints connect the lower control arm to the steering knuckle. They are vital pieces for the proper functioning of the suspension system. When they are not in a good position, they cause you to lose control of your vehicle, making you susceptible to accidents.

The Sequoia is very susceptible to rust as Toyota seems to have not thoroughly treated many of the frames of its vehicle with anti-corrosion chemicals. After a few years of use, it is not odd to find rust on a Sequoia. The rust is more severe in areas where salt is often applied on the road and for Sequoias that spend most of their life in a garage.

Rust affects a vehicle’s appearance and weakens its load-bearing components, as the undercarriage and some vulnerable areas help spread the rust and reduce the car’s structural integrity in the process. This rust problem affected many other Toyota SUV models, not Sequoia alone, to the point where drivers filed a lawsuit against Toyota.

As a settlement, Toyota had to pay $3.4 billion to drivers who purchased the 2005 to 2008 Sequoia models. The settlement covers the cost of inspections, the application of corrosion-resistant compounds, and a complete frame replacement for the most severe cases.

Models made from 2001 to 2004 suffered the most from the effects of a damaged exhaust manifold.

The role of the exhaust manifold is to direct the hot exhaust gasses away from the engine and into the exhaust system. When the manifold is cracked, it makes a lot of noise when the car is being fired up as the metal heats up to expand. The noise disappears when the pipe is hot enough because the heat has caused it to expand enough to seal itself.

If left untreated, a cracked manifold can damage other parts of the engine, reducing engine performance and fuel economy and causing exhaust gasses to enter the cabin. Not only do the fumes entering the cabin subtract from ride comfort, but they also pose a serious health hazard that can lead to a damaged respiratory system.

Some drivers have complained about their camshaft tower failing prematurely, causing an oil leak that accelerates the overheating process, putting you at risk of losing your engine. The 2008 Sequoia is most notorious for having this problem.

To adequately repair this issue, drivers had to replace the offending o-rings and gaskets. The price for this replacement is approximately $2,500.

2001 to 2004 Toyota Sequoias are most prone to oxygen sensor failure. Drivers complain that the problem reoccurs several times in a few years, which is very inconvenient. A bad oxygen sensor causes engine misfires, poor fuel efficiency, and rough idling.

Which Toyota Sequoia years to avoid?

Some Sequoias have more problems than others, which inconveniences their drivers. Below are the Toyota Sequoia years you should avoid by all means, so you can fully enjoy the value of your money when you purchase a Sequoia.

The first generation of Toyota Sequoias is far from the Sequoia we know today. They were unreliable with many problems, including brake, body/paint, steering, suspension, and engine issues. Sequoias of this first generation were known for engine failure and death as early as 100,000 miles.

One of the worst problems a driver reported while driving one of the first generations of Sequoia was a transmission failure, an erratic VSC traction control system, and a cracked manifold happening all at once. All these were severe issues that cost a lot to repair.

The 2002 Sequoia model holds the record as the worst Sequoia as it had the most number of complaints and troubles. The other models following the 2002 models did not equal the reputation of the 2002 Sequoia but had other frustrating problems. These problems include air injection system failure, camshaft tower leaks, excessive rusting, acceleration loss, clunk noises at the rear end, and a battery that runs down rapidly.

What made owning a first-generation Sequoia more annoying was that some of them started developing faults after an early 3,000 miles, with the more severe ones appearing after 90,000 miles. The 2001 to 2004 model years of the Sequoia are avoided altogether as the number and kind of complaints drivers had to give were more than disheartening.

Sequoias of the 2005, 2006, and 2007 model years tried to compensate for their discouraging beginnings. They recorded fewer problems than the 2001 to 2004 models but are still best avoided as their problems undervalue Sequoia’s price.

The second generation of Toyota Sequoia came with significant improvements. However, the very first Sequoia of this generation is best left alone.

Drivers complained that the ride was rough on the 2008 Sequoia, and the exhaust manifold was notorious for cracking early. Accessories like airbags and belts wore and torn pretty early, with some drivers complaining of the seatbelt refusing to recoil after use.

Despite the improvement, the 2008 Sequoia model was still poor in terms of safety, as its handling was poor and sloppy.

After the poor execution of their vision for the Sequoia in the first generation, Toyota sat up for later generations and produced the Sequoias, which we are familiar with today. Here are the best Sequoia years you should look out for during purchase.

From the list, we can see that Toyota began bringing out the best in the Sequoia after the failure of the first generation. Excluding the 2008 model, which started the series, all other model years of the second generation had significant improvements in safety and ride comfort. The number of complaints Toyota normally received for the Sequoia reduced drastically, and the reputation of the Sequoia as a reliable vehicle grew to its current unbeatable position.

The latest models of the Toyota Sequoia are equipped with innovative technology designed to promote ease of driving, safety, convenience, and driver satisfaction. Also, the intensity of the common problems Sequoia faces often is largely reduced in the newer models.

Is the Toyota Sequoia worth buying?

The Toyota Sequoia is worth buying as it fulfils its performance, comfort, and luxury promise. The SUV is spacious, quiet, capable, and worth its price. It has different trim options, so you to pick one that best suits your personality and budget.

If you are looking to buy a car as an investment, the Sequoia is one to consider, as it holds its value pretty well due to its reliability. With the proper maintenance and care, the Sequoia can last about 300,000 miles or 20 years, which is 100,000 miles more than the average lifespan of a conventional vehicle.

What problems does the Toyota Sequoia have?

Which is better, Tahoe or Sequoia?

Chevrolet’s Tahoe boasts more space and capability when compared with Toyota’s Sequoia, but the Sequoia towers over it with its better efficiency and more power. The Sequoia tows more weight and has more safety features than the Tahoe.

What is the life expectancy of a Toyota Sequoia?

The Toyota Sequoia is expected to last between 250,000 to 300,000 miles. The Sequoia can perform well even after 300,000 miles with proper care and maintenance.

What to look for when buying a used Toyota Sequoia?

When buying a used Toyota Sequoia, look for one with mileage less than 100,000 miles. Avoid all Sequoias from the first generation and do your research to know if the model you are buying has had any recall. If it has, crosscheck the vehicle’s VIN on the NHTSA’s website to know whether the car you are buying benefited from the recall.