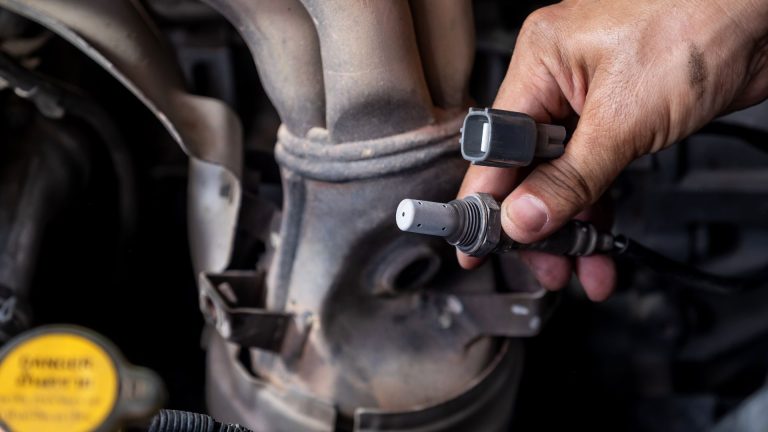 In the engine combustion process, the fuel/air ratio is essential, and there are various sensors deployed to provide data to the computer. When it comes to the part of the equation that relates to air intake, the oxygen sensor often goes under the radar.

Of course, the throttle position sensor and mass airflow sensor are responsible for measuring the air intake level based on how open the throttle is, and the accordant fuel level respectively. Still, the oxygen sensor also adds up to this mix, and that’s why it’s important to recognize bad oxygen sensor symptoms. If you’ve never heard of this sensor, rest assured that our team will guide you through its role and signs that it has gone bad.

What’s the role of an oxygen sensor?

Your car’s oxygen sensor measures the amount of oxygen in the exhaust system. The main oxygen sensor is placed right before the catalytic converter, while most cars have an additional sensor after it as well. Not only does it regulate the exhaust gases that way, but it also affects the air/fuel ratio.

The sensor helps calculate the optimal mix of air and fuel for the best performance of your engine, and the best fuel economy. It does it by measuring the amount of oxygen in the exhaust and reporting back to the car’s engine control unit (ECU).

The ECU uses the data to control the fuel injectors and to arrange their function accordingly to the amount of measured oxygen. Just as it’s important to replace the mass airflow sensor on time, replacing the oxygen sensor also adds up to the engine’s performance.

Precisely, the role of an oxygen sensor is to recognize the lean or rich condition of the combustion mix. The lean condition means there’s much more air in the mix than it’s supposed to, and the sensor reports this to the ECU. The ECU then sends a command to the fuel injectors and more fuel is added to the mix.

On the other hand, if there’s a rich condition, it means there’s more fuel than air. That excess fuel would exit through the exhaust pipe, creating an engine backfire. To prevent that, the oxygen sensor reports to the ECU and it reduces the amount of fuel sprayed by the injectors.

Oxygen sensors last considerably long, and they often survive up to 100,000 miles. Still, as the time for replacement comes, the ECU won’t get the needed measurements which could affect the air/fuel condition.

Signs of a bad oxygen sensor

As mentioned, a rich fuel condition could result in an engine backfire, and that’s just one of the main symptoms of bad oxygen sensors. You’ll also notice the “check engine” light glowing up on the dashboard, as it normally happens once the fuel/air mix gets disrupted.

There’s an abundance of other symptoms that could warn you of a bad oxygen sensor, and these are the most common ones:

The rotten egg smell coming from the exhaust means there’s a rich fuel condition. That unburnt fuel circles back from the combustion chamber and into the tailpipe where it burns. That’s also a reason why your car might start pushing black smoke from the exhaust.

The smoke is often accompanied by backfiring, so you might also hear a banging sound coming from the exhaust. You should also check the fuel injectors in case of these symptoms, but their operation is often compromised by the failed oxygen sensor in this case.

While the mass airflow sensor is meant to measure the amount of air that reaches the engine and reports back to the ECU, the oxygen sensor seemingly serves a similar purpose. However, the MAF serves this role in combustion, while the oxygen sensor serves emission control.

Of course, it subsequently also helps the ECU determine the amount of fuel needed for proper combustion. Still, if the oxygen sensor fails, your gas emissions will get worse and you won’t be able to pass the emissions test.

Pollutants from the exhaust are then let out of the exhaust and reach the atmosphere, so it’s impossible to legally drive this way. Although your catalytic converter reduces the harmful emissions as much as possible as leftover fuel exits through the tailpipe, it can’t handle such a drastic change.

It’s possible to partially clean the converter using a Cataclean, but it can’t save the converter if you don’t replace the oxygen sensors on time.

As soon as the air/fuel ratio gets disrupted by a failed oxygen sensor, you’ll encounter numerous performance problems. Your engine won’t operate regularly due to improper combustion, and there will be a lot of misfires and backfires.

A drastic change in fuel economy can also be a sign of a bad oxygen sensor. If the sensor malfunctions, it could sense a faulty signal telling the ECU that there’s a lean condition. So, the ECU will command the injectors to push more fuel through and that’s why you might be having a problem with increased fuel consumption.

That increase in fuel consumption also results in leftover fuel being directed over the catalytic converter, which might damage it and increase gas emissions.

In the end, if you experience any bad oxygen sensor symptoms, it isn’t something to take lightly. You can check the sensor’s operation by taking out the oxygen sensor fuse. In that case, the ECU will calculate the air/fuel mix by the data from other sensors such as the throttle position sensor and the MAF.

Hopefully, these symptoms in our guide will be enough of a warning for you to check the sensor and timely replace it if needed.

What happens when the oxygen sensor goes bad?

When the oxygen sensor goes bad, you might get a lean or rich combustion condition, and it will result in higher gas emissions and loss of power accompanied by the rotten egg smell from the exhaust.

Can you drive your car with a bad O2 sensor?

You can drive your car with a bad O2 sensor, but your engine won’t perform as expected and you might have difficulties starting it.

Can a bad O2 sensor cause poor acceleration?

Yes, a bad O2 sensor can cause poor acceleration triggered by misfires and backfires.

What kind of problems can a bad O2 sensor cause?

A bad O2 sensor can cause black smoke coming from the exhaust, increased gas emissions, lower engine power, and an increase in fuel consumption.