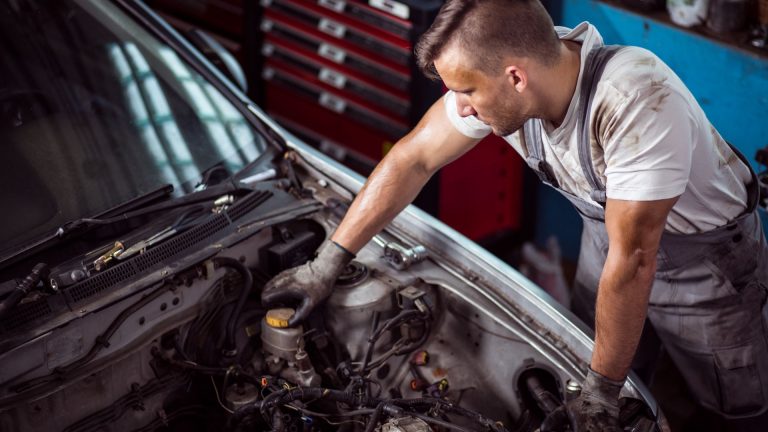 The braking system is one of the most important things to take care of, as you need it to function at all times, especially in an emergency. The brake fluid is one of the most crucial things you should replace every one or two years. If not, it may cause corrosion inside the brake system and damage other components.

There are two types of brake fluids: glycol and silicone basis. DOT 3 and DOT 4 are popular glycol-based brake fluids for many vehicles. The DOT 3 is familiar with average drivers, while DOT 4 is famous in newer car models.

These brake fluids are subjected to an average amount of heat since the brakes convert kinetic energy to heat. However, they can only withstand a certain amount of heat before it starts to boil. In this article, we will delve into brake fluids and the comparison between DOT 3 vs. DOT 4.

How does brake fluid work?

Many cars use a hydraulic braking system. If you press the brake pedal, this pressure will send brake fluid into your calipers, which pushes the pads into the rotors. As you apply more pressure, the rotors and pads will generate more friction, and the car will stop abruptly.

Without brake fluid, you will be unable to stop your car. Furthermore, it would help if you change your brake fluid regularly because it worsens after a long time. The brake pads can absorb moisture and prevent your brakes from working adequately.

Insufficient brake fluid can cause your brake system to malfunction. Maintaining your brake fluid is essential for safe driving. A brake fluid has a boiling point that will produce a higher temperature while braking.

This is the reason moisture is terrible for brake fluids. If the brake fluid has absorbed water, it will boil and release vapor. When the gas enters the braking system, pressing the brake will compress the vapor.

Usually, boiling brake fluid may lead to you hitting the brake, and then it will hit the floor without slowing down the car. This is why it is crucial to replace your brake fluid regularly.

Brake fluid ratings and what they mean

Since there is no standard formula for most brake fluids, this is an estimated boiling point, and the precise boiling points may vary. However, DOT 3 brake fluids exceed these values. The DOT 3 fluid contains 80% glycol ether base, which is one of the factors that contribute to water absorption.

The DOT 4 fluids have higher dry and wet boiling points, which are required in brake systems that generate more heat due to faster speeds and heavier towing loads. DOT 4 absorbs moisture faster than DOT 3 brake fluids, and you should change it more frequently. DOT 4 fluid usually has a 50% to 65% glycol ether base with 20 – 30% Borate Ester that helps resist the fluid’s boiling. This makes you have 3.7% moisture in your DOT 3 fluid, which boils roughly at 290°F.

The moisture content in your DOT 4 brake fluid boils at around 330°F. DOT 4 fluid absorbs the 3.7% water content 20% faster than a DOT 3 fluid. When examining DOT 3 vs. DOT 4, the lifespan and boiling points are the most significant distinction between the brake fluids. You may have to replace DOT 4 more often than DOT 3 brake fluid.

The DOT 4 brake fluid has a higher boiling point than DOT 3 brake fluid. If you do a lot of heavy braking with your vehicle, then DOT3 brake fluid can quickly boil, resulting in severe complications.

The DOT 4 brake fluid is more reliable if you regularly perform heavy braking because it does not boil as quickly. Drivers involved in autocross will undoubtedly require brake fluid with a high boiling point.

DOT 3 brake fluid is made from polyalkenes glycol and ether. This mixture creates a brake fluid that can resist average heated and wet conditions.

The DOT 4 brake fluid is composed of borate and glycol. This mixture makes the DOT 4 capable of handling higher temperatures.

The average economy vehicle uses DOT 3 brake fluids because it requires less stopping power, and the driver will not be braking aggressively often. However, you can find the DOT 4 braking fluid in racing cars, motorcycles, and police cars, since they all brake aggressively and more regularly. It is essential to follow the car manufacturers’ recommendations on what brake fluid to use.

Viscosity refers to the measure of fluids’ resistance to flow. DOT 3 and DOT 4 are both glycol-based fluids under standard conditions. DOT 3 has a longer life than DOT 4. Glycol-based fluids are a mixture of many different substances blended in the fluid.

DOT 4 viscosity is more than DOT 3, and it can maintain fluidity at a moderately higher temperature. DOT 4 brake fluid gives stability and tolerance under high temperatures because of its high viscosity.

DOT 5 is a silicone-based brake fluid. It does not absorb water from the air and is incompatible with ABS. There is a DOT 5.1 brake fluid designed with 70% silicone, allowing it to be more compatible with other braking systems than DOT 5.

It is essential to follow your manufacturers’ recommendations to know if your braking system is compatible with the DOT brake fluid.

What does the boiling point mean among the brake fluids?

DOT 3 and DOT 4 brake fluids absorb water over time, which means they are hygroscopic. This is why you should replace them annually or bi-annually. If you drive your car aggressively or with a trailer and brake a lot, the brake fluid will heat up faster. If it heats up too much and starts to boil, it will lose its ability to brake your car, which you may never want to occur. Therefore it is crucial to use brake fluids with high boiling points

DOT 3 and DOT 4 are both glycol-based brake fluids. However, DOT 3 is known to have a longer service life than DOT 4. DOT 3 brake fluid tends to absorb water more quickly than DOT 4.

It is most likely to boil under intense braking, affecting performance. This is why DOT 3 fluids are not recommended for aggressive vehicles. DOT 4 gives a high tolerance under high temperatures because of its high viscosity. This aids in the proper functioning of the braking system.

What happens if you use DOT 3 instead of DOT 4 brake fluid?

If you use DOT 3 instead of DOT 4 brake fluid, it will risk the boiling point of the brake fluid. Glycol-base fluids absorb water over time, and this leads to corrosion.

DOT 4 has a higher standard since it is compatible with the anti-lock braking system and standard traction control. It also has a higher boiling point, making it the better option for all applications.