Can you drive with a bad alternator? 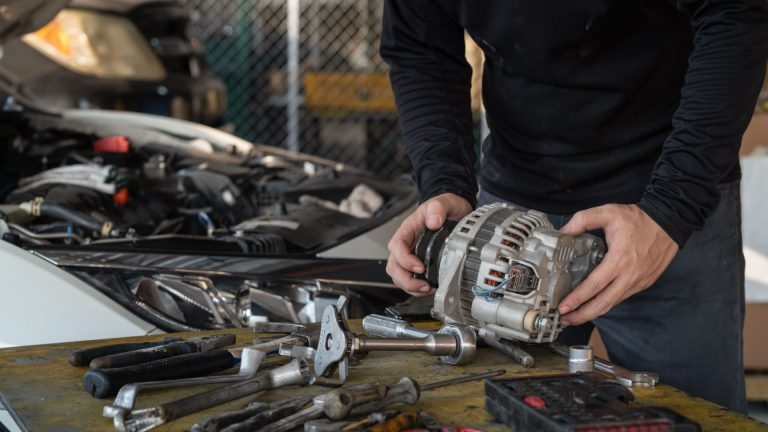 Getting stuck on the road with your car is something no one likes to experience, but this can happen to anyone. Your car is a complex machine with various interconnected systems, and one of these systems is the alternator, which keeps the car powered.

Like every other machine or system, the alternator could fail suddenly or gradually over time. As a vital system, your vehicle would eventually stop due to lack of power if it fails. Just as you need air to stay alive, so does your car need a healthy alternator to remain turned on.

So maybe your alternator is bad, and you need to go somewhere. Can you drive with a bad alternator? This article provides detailed information about that and answers to other related questions.

What is an alternator?

The alternator is essential to every vehicle and is responsible for charging your vehicle’s battery. It is one of the three components that make up a car’s charging system. It converts chemical energy to electrical energy, so you can charge not only the battery in your engine but also power other electrical components of your car, such as the windscreen wiper and headlights.

Around the size of a softball, the alternator is found near the front of the engine, with a belt running around it. The alternator receives power from the crankshaft, which converts the pistons’ up and down movements into circular movements.

How does an alternator work?

The alternator’s primary function is to help produce the electricity needed to power all the electrical accessories in your car. This is because your car’s engine only provides mechanical energy, and does not generate electricity. A car’s charging system consists of a car battery, a voltage regulator, and an alternator.

As we all know, overcharging and undercharging your battery can be a severe issue; thankfully, that is where the voltage regulator steps in to keep these things in check.

How long do alternators last?

Ideally, an alternator is expected to last about 6 – 10 years or roughly 80,000 – 150,000 miles. Determining the lifespan of an alternator is quite a difficult task since so many factors can affect its longevity. While some cars may experience a faulty alternator after 40,000 miles, others can go up to 100,000 miles without troubleshooting.

In older cars, the alternator powers only a few things, like the internal and external lights, radio, and one or two other components. However, owing to the advance in technology, modern cars have many more accessories to power, such as GPS units, power steering, heated seats, and more. Your alternator needs to power all these extra accessories, which increases its load.

What causes a faulty alternator?

Several reasons can cause a faulty alternator, but some common issues include:

Even though your car’s charging system was designed for repeated use under various weather and road settings, extreme or poor conditions and poor maintenance can create all these problems.

Signs of a bad alternator

Alternators usually do not require much attention unless they are worn out. As earlier stated, most alternators last between 6– 10 years in optimum conditions. However, there are several ways to tell if your alternator is seeing its last days. A few of these signs include:

While a stalling car could result from various faults like a bad fuel pump, a bad alternator could be one of them. Your vehicle stalls because it can’t get electricity from the alternator.

If you always need to boost your battery, it means it fails to charge, which could signify that your alternator needs a replacement.

The alternator warning light turns on

An alternator warning light is likely the most common sign of an issue with your charging system. Most vehicles built in the last ten years have a dedicated warning light to signal alternator-related problems. While some cars use their battery light to check, others may show “GEN” or “ALT,” which implies the generator or alternator.

Can a car still run with a bad alternator?

Yes, a car can continue running with a bad alternator. However, it is not advisable to do this, especially on newer vehicle models. This is because these models have more electricity consumption compared to older models.

With a bad alternator, the vehicle would only be able to run for a short time before it goes off completely. Suppose you have a faulty alternator or you’re starting to experience car alternator challenges. In that case, you can still drive, but it is not the best thing to do because you are putting your engine at considerable risk.

How long can I drive with a bad alternator?

You can generally drive for about 25 to 30 minutes with a bad alternator, as long as you have a healthy battery. However, you could expect as much as two hours or as little as five minutes of runtime for most vehicles.

But then, as soon as your battery is depleted, the car will go off since the alternator is not charging it anymore. Again, it is not good to keep driving your vehicle in this condition, so you should use your last few miles to find the nearest auto repair shop.

What happens when the alternator goes bad while driving?

If your alternator goes bad while driving, you will notice that the car loses power. Usually, the alternator warning light would turn on, and accessories that depend on the alternator would become irresponsive, one after another, before the car goes off completely. However, the battery could still keep the car running but not for long.

Yes, an alternator can fail suddenly, as a light bulb in a room would. Alternators can go bad without warning or gradually over time. When your alternator begins to fail, it causes various technical problems to your car and eventually leads straight to a breakdown.

Some proper maintenance procedures include:

The cost of repairing an alternator depends on the problem it has. For something simple like changing an alternator belt, expect to pay around $100 – $150 outside the diagnosis fee. However, it is better to replace the alternator entirely if it’s malfunctioning.

The alternator can indeed fail at any time without warning. Still, it is also true that we can avoid this scenario by tackling it early enough before it happens. This could be avoided by taking your vehicle for an alternator check every 100,000 miles, as it would ensure that you are on the safe side and ahead of things that concern this system.

Again, proper maintenance can get you the best performance out of anything, including your alternator. So next time you notice something unusual, don’t ignore it.