Burning smell from the car – symptoms and causes 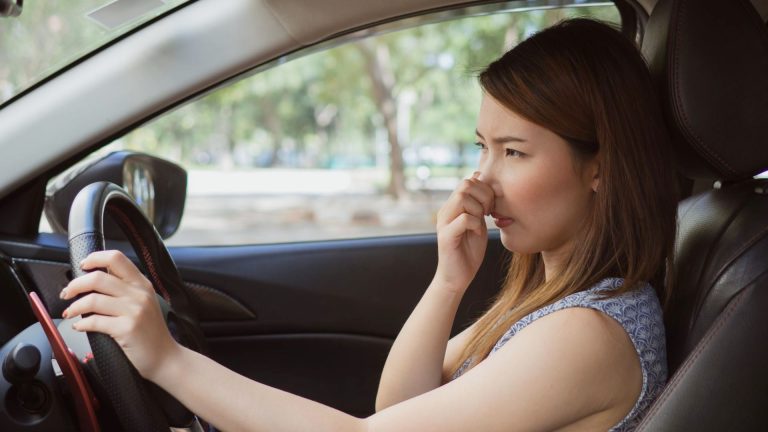 If you notice a bad odor coming from under the hood or in the car cabin, trusting your nose can surprisingly help you out in finding the cause. Still, most drivers panic once they notice a burning smell from the car, as it certainly makes it seem like big trouble.

The truth is, a burning smell doesn’t necessarily mean that something’s wrong with your engine or transmission. It could be something as simple as an A/C compressor, or something as serious as a stuck belt. That’s why we’ll discuss all the symptoms so you can figure out what sort of an issue causes the burning smell in your car.

Since a burning smell from the car can be caused by a variety of reasons, we must deal with some of the most serious causes first. Naturally, if you notice a burning smell coming from under the hood, you should stop driving as it could be an engine issue.

Here are a few possible causes of the burning smell in this case:

So, you might experience a light fruity scent as your coolant is leaking. If you have a coolant leak, your engine won’t be able to cool down properly and it might cause a burning smell afterward. On the other hand, it could be an oil leak that’s causing the burning smell, and it resembles a fire smoke scent.

An oil leak can also be potentially devastating for your engine as well. In case of an oil leak, your engine components could wear off more quickly, and it could cause rubber seals and hoses to degrade. It’s not safe to drive more than 10 to 15 miles with an oil leak, so in this case, head straight to your local mechanic.

Another common cause of a burning smell is a stuck engine belt. It’s yet another key component and has a specific rubbery burning smell. A stuck belt could cause serious issues like water pump malfunction, power steering loss, and even engine overheating. So, all of these issues are in a group of engine-related problems, and this type of burning smell is the most dangerous for your vehicle.

Clutch problems can also cause a burning smell in cars with a manual transmission, and it can also be a troubling mechanical issue. It’s also quite expensive to replace the clutch system, so you should be extra careful with it.

The most common reason behind the burning smell coming from the clutch is improper clutch pressure. If you don’t push the pedal all the way down while switching gears, it could cause a faster tear. This is often referred to as “riding the clutch”.

It’s also bad to hold down the clutch pedal for too long, especially at traffic lights. Clutch burns mostly occur when beginners are just learning about driving a manual gearbox car or if you don’t timely service it.

Burning smell from the A/C compressor

One of the potential issues that will at least cost less to fix than with engine components or the clutch is the overheating A/C compressor. It also causes a burning smell, but usually after you turn on the air conditioning.

So, at least you’ll have a clear sign of what’s causing the smell in this case. However, the A/C smell can also be connected with the belt issues, so you should at least get your car checked at the mechanic. You can just put up your hand near the air vents in the cabin. If there’s too much heat coming out, you probably have an A/C compressor overheating issue.

Pay attention to the brakes

If you don’t timely replace brake pads, you risk earning that burning smell from the brakes as well. It usually happens if your break pads are worn off and you engage them for too long. Let’s say you are driving downhill for an extended period – you might constantly hold your foot on the brake pedal.

This is one of the primary reasons for the burning smell since having your brakes engaged for too long causes them to overheat. On the other hand, you might have a problem with worn-off rotors along with the brake pads, which can cause a burning smell. You should get your brakes checked in case you notice even the slightest smell coming out of them.

A burning smell in the cabin

If you notice burning smell coming from the cabin, it’s probably due to old fluids or burnt electrical components. Problems with the wiring can be more dangerous than it seems. In case of an electrical short, other plastic components might ignite as well.

Some things you can do as a matter of precaution is to check your fluids and get the car checked by the electrician.

Can I drive my car if it smells like burning?

You shouldn’t drive your car in case you notice any burning smells, especially if they are engine smells. Even if it’s just the A/C compressor, you should drive straight to a mechanic to get your vehicle checked to be sure.

Your car could smell like plastic burning in case the plastic insulation is damaged, or in case of an electrical short. Wires could ignite and burn the plastic components as well, so that’s a common cause of the burning smell in the cabin.

It could also be a matter of the exhaust system, in case the plastic burning smell doesn’t come from the cabin.

Why does my car smell like it’s overheating but it’s not?

If your car smells like it’s overheating but it’s not, it could be due to a water leak from the head gasket. It could leak onto the exhaust manifold and due to high temperature, it quickly evaporates and triggers the smell much like an engine overheated smell.

The coolant system malfunctions should still get inspected as soon as possible to avoid further damage to engine components. On the other hand, it could also be a result of an engine misfire triggered by a weak spark.

Ultimately, we conclude that a burning smell from the car shouldn’t be taken lightly. While some scenarios aren’t as dangerous as engine overheating or oil leaks, you should still get the car checked ASAP.

As soon as you notice the burning smell, you should slowly drive to a mechanic and get your engine components, brakes, or clutch in manual cars checked.