Symptoms of rod knock – how to recognize and fix the problem? 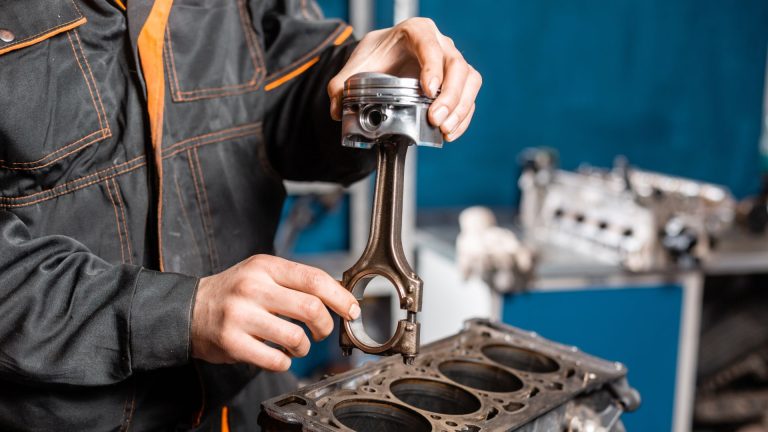 The pleasure of taking a relaxed everyday drive can easily be ruined by driving noises, especially if they come from under the hood. Among such noises, there’s one sound that every driver should pray never hearing from their car – the rod knock.

In this guide, our team dedicates to giving you a concise overview of this problem, including the main symptoms of rod knock. We’ll also discuss what you can do to fix the knock, and the first piece of advice is to stop your car immediately if this happens. Let’s get into more details so you can know how to recognize this characteristic noise and its symptoms.

What’s a rod knock and how dangerous is it?

The rod knock is a high-pitched knocking or rattling sound that comes from the engine, seemingly from the bottom side of the engine assembly. It’s a noise similar to hitting a solid metal construction with a hammer.

If you are like most drivers, you’ll instinctively try to turn the wheel, rev the engine, or apply other tests to see what’s the cause. However, rod knock isn’t just an issue like bad wheel alignment or worn-off brakes – it’s one of the most serious mechanical problems.

You’ll have about 20 seconds to shut off the engine before it completely dies from the moment the knocking starts. Still, it’s impossible to tell the exact damage before you get the car towed to a mechanic that will inspect your engine.

To cut to the point – rod knock is caused by the metal-to-metal contact between the pistons and the crankshaft. There’s no proper rotation in this case, and the pistons hit the crankshaft directly so that causes the noise. It’s called a “rod” knock since it comes from the connecting rod which ties the pistons with the crankshaft.

The main reason behind the knocking noise

In the internal combustion engine, the force produced by the spark plug lighting up the mixture of fuel and air is transferred to pistons. Engine pistons are connected to the crankshaft via the rod, and the piston forces the crankshaft into rotation.

So, the rod sends tensile forces from the piston and transfers them into crankshaft rotation. However, there’s a rod bearing between the rod and the crankshaft, and it has a small void. This is where the engine oil passes to lubricate the metal components, therefore preventing damage from heat and friction.

The main reason for rod knock is a worn bearing since the gap gets wider in this case. This causes low lubrication and the components come in direct contact as the metal pushes against metal. That’s the root cause of the knocking sound you might hear from under the hood.

Rod knocks further cause damage to the pistons, cracked connection rod, and damage done to the cylinder wall. Eventually, your engine will seize and it will take a complete rebuild to start it up again. That’s why it’s important to recognize the symptoms on time and deal with this issue as soon as possible.

Signs of a rod knock

There are several symptoms of a rod knock other than the knocking noise itself, which is the most obvious one. These are the remaining common signs of this delicate problem:

If the rod bearings wear off, more oil will pass through the gap between the rod and the crankshaft. Because of it, your oil level reduces and the “low oil pressure” lamp might start glowing on the dashboard. It can even cause an oil leak and prevent engine oil from lubricating other engine components.

It’s at least a sign you should check the oil and could be an early symptom of the rod knock that might occur shortly. These issues are still tough to diagnose before something happens, and it usually occurs if you are driving your car at high revs and over the engine’s capabilities.

Dashboard warning for low oil level and the “check engine” light could be the first signs of worn-off rod bearing that causes rod knocking. Sometimes it can just be an error code if your vehicle and engine seem to be driving regularly.

However, you should never ignore this warning, and the most important thing to do is drive on lower revs. Don’t try to aggressively accelerate to see if something will happen – it can only make the problem worse.

Instead, try to slowly raise the revs and turn the radio and A/C unit off. Carefully listen to your engine to see if there’s any noise that appears as you slowly accelerate. Rod knock noise is often preceded by other engine noises since the oil leak caused by worn bearing prevents lubrication of the valvetrain.

If you hear engine noises at this point, drive or tow your car straight to a mechanic. You still might be able to save your engine before the rod knocking sound appears.

Another check you can perform is to examine the oil dipstick of your car. Pull it out, wipe it clean with paper and return it to the tube. Now you’ll be able to get an accurate oil level reading as you pull the dipstick out again.

Pay attention to the oil level, and inspect it for any dirt or contaminants. If you notice metal shavings in the oil, it’s either a damaged rod bearing or another engine issue. Either way, it’s not safe to drive the car any further. Contaminated oil is one of the main signs of a knocking rod.

Metal shavings in the oil can also be paired with white smoke coming from the exhaust, which means the oil has breached into the cylinders. So, even if it’s not the worn-off rod bearing, it’s still worth checking the issue to prevent engine damage.

As mentioned, other engine noises can precede the rod knocking noise, so these can be an early sign. Pay attention to the noise as you steadily build up the speed, and as you shift through the gears. If the rod knock noise already started, don’t drive your car any further.

Slowly and gently rev up, and if you hear the engine knock as you lift your foot from the gas, it’s a symptom of a worn rod bearing. Engine noises are easily distinguishable from brake noises and bad wheel bearings.

To make sure, you can ask someone to rev the car as you observe the engine with the hood popped open. Again, don’t rev it too high since the noise will probably be present even at lower revs.

If you find yourself in this unfortunate situation, your only option will be an engine rebuild. It’s a bothersome and expensive process, and you’ll need a trustworthy and experienced mechanic to do the job.

Still, you might be able to have a mechanic replace the bearings and do crankshaft repairs in a sort of lighter rebuild. If the engine isn’t shut off on time, and the knocking causes havoc in your engine compartment, you’ll need a complete engine rebuild with all the new parts.

Overall, if you experience symptoms of rod knock before the sound even occurs, you might save your engine from expensive repairs. Don’t ignore the dashboard lights, and don’t speed up in case you hear any noise coming out of the engine area.

Our team hopes that this never happens to you, but now you should at least know what it looks like and it might help you prevent the worst-case scenario.

Rod knock sounds like a loud knocking coming from the engine, similar to the sound of taping a metal construction with a hammer.

What causes a rod to knock?

Worn rod bearings cause a rod to knock, as it prevents proper lubrication of the metal parts and initiates direct contact.

What happens when a rod is knocking?

When a rod is knocking, unlubricated engine components collide and the piston changes direction, causing the crankshaft to improperly rotate.

Can low oil cause rod knock?

Yes, low oil can cause a rod knock, but it’s almost always a consequence of worn rod bearing. Since the bearing gap gets larger, more oil is needed to lubricate the parts and it causes low oil and leaks.

The rod knock sound happens suddenly, but the process that leads to it doesn’t. There are various symptoms like “check engine” and low oil pressure lights glowing, engine noises when driving and shifting gears, and metal shavings in the oil.