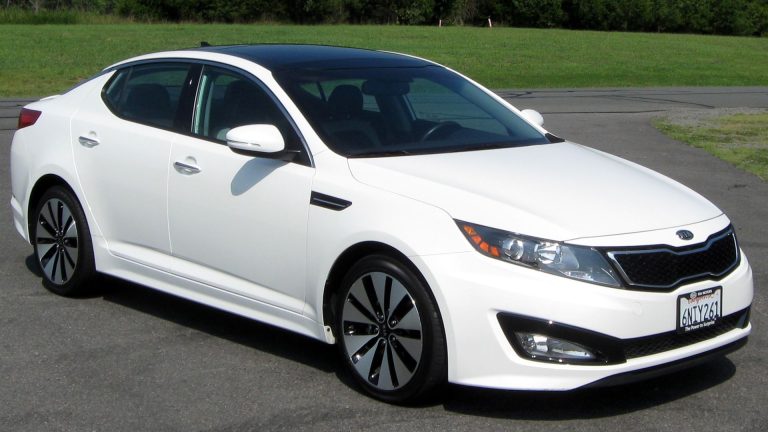 Kia Optima is a mid-size sedan that brought a lot of sympathy from drivers looking for an affordable, yet high-quality made car for family needs. While it wasn’t as sporty in the design or the engine offering as some of its competitors like the BMW 3 Series, it was always more than a decent car.

The great boost of popularity started with the third generation which was referred to as the Optima for all markets. Previously, the car was known as Kia Magentis in some markets, and it was also renamed Kia K5 for the latest gen. To give you a short answer to common inquiries – yes, the Optima is a reliable ride, but there are some Kia Optima years to avoid, as we’ll discuss in this guide.

Among the car models in the same category, Optima is one of the more reliable solutions with a few standout drawbacks through the production years. Luckily, Kia addressed most of these issues, but it’s still worth knowing the culprit behind some problems that could give you headaches as a new Optima driver.

Without any doubt, the most serious problem with the Optima was the engine fault that was mostly present for the 1.6-liter and 2.0-liter turbocharged petrol engines. The problem mostly caused premature coolant level reduction, as well as some rod bearing issues that resulted in rod knock.

While these are serious problems, they weren’t as common as some less-serious issues. Optima drivers have reported issues with the airbag inflator module, fuel delivery system faults, and problems with the automatic emergency braking system.

The third-generation Optima got a seriously refreshed and modern look when compared to the previous generation. Along with that, there came some improvements with the engine choice, but the 2.0-liter inline-four-cylinder petrol engine remained one of the best options.

Unfortunately, this engine pick has gone through some serious troubles, especially concerning the rod knock. It occurs when the rod bearing loses lubrication and low oil pressure and flow through the components may cause the pistons to hit the cylinder head wall.

In this case, you’ll hear a distinct and loud knocking noise, and the engine seizes right after the noise. Luckily, the problem that remained a serious issue for 2011 to 2014 Optima drivers was sorted out with the official Kia recall when the manufacturer replaced faulty engines free of charge. So, it’s at least important to check if your third-generation Optima has gone through the recall before you buy one.

The fourth generation of the Optima came even more aggressive in terms of exterior design and interior materials quality went up for this one. The engine problem was long gone by this time, with some minor troubles with oil leaks on some engines that we’ll discuss.

One of the most consistent problems that drivers of different Optima generation models have faced is a faulty fuel delivery system. Depending on the model year and the generation, this problem could involve troubles with the low-pressure fuel pump or the fuel hose leaks.

In some 2011 to 2014 models that went through the engine recall, the hose could be damaged during engine replacement and that initiates a red flag. That’s why Kia decided to issue an additional recall to fix this issue for the mentioned model years, and the recall started in 2018.

The forward collision avoidance (FCA) system on the 2019 Kia Optima models is a useful setting for accident prevention, but it also caused headaches for some drivers. Namely, the system had a faulty setting that was later on fixed through another recall in 2019.

The problem was caused by a software error, and there was a risk of sudden braking without an obvious reason or a failed braking in case of a detected front-end vehicle.

Which Kia Optima years to avoid?

The biggest issue with the Kia Optima vehicles was an engine fault that was specific for certain model years. For that reason, our team wanted to give you a heads-up about the problematic model years, and tell you about the production years you should steer away from.

It’s also best to avoid the models that have gone through the engine recall but didn’t go through the fuel delivery hose adjustment later on or the models with airbag faults. So, here’s a list of model years to avoid based on the Kia Optima generations.

The first generation Kia Optima, also known as Kia Magentis in some markets, was in production from 2000 to 2006. This generation was based on the Hyundai Sonata, also a reliable model and the two cars shared a lot of mechanical features with slight design differences.

That’s also the reason why the first generation is among the most reliable ones, except for the 2001 and 2002 model years that suffered the most driver reports and recalls. These were mostly due to faulty engine control unit (ECU) sensors that caused sluggish operation, but nothing too out of the ordinary.

While the first generation had a few slight issues, the re-designed model that was also considered a second-generation Magentis or Optima didn’t have many issues. The choice of engines was mostly the same, featuring a reliable 2.7-liter V6 and a 1.8-liter four-cylinder engine.

However, the third generation that started production in 2010 had a fair share of issues, and this is the generation that included those troublesome engine recalls. Because of this, it’s best to avoid the 2011 to 2014 Optima and go for the 2010 model if you wish to avoid such issues.

The 2011 model year is considered to be the worst among the third-generation models, due to excessive fuel leaks and electrical issues along with the 2.0-liter and 2.4-liter engine faults.

The fourth generation Optima came before the current fifth generation and it had only one problematic model year – the 2015 Optima. It came with a lot of similar problems that the previous model had, especially when it comes to the 2.4-liter engine issue.

Some of the 2015 Optimas had to go through the same type of recall, and the car also dealt with serious fuel delivery system faults for the 1.6-liter GDI turbo engines and 2.0-liter Nu MPI turbocharged engines. That’s why you should at least check if the car was recalled to avoid ending up with signs of a bad fuel pump and a lean condition within the engine.

While the third generation had some major issues with the 2.0-liter and 2.4-liter engines that continued for the initial production year of the fourth-gen, the fifth generation seems quite reliable. it’s one of the best Optima generations up to date, along with the second generation.

So, it’s safe to buy an Optima from the second and fifth generation in all model years, but we’ll also give you an updated list of safe model years to buy from all generations:

Most of the problems for the first generation were sorted out with the 2004 model, and the only issues that the 2001 and 2002 model years had were usual for high-mileage cars. The second generation proved to be reliable enough, so you should pay the most attention if you are aiming for a third-gen Optima.

Try to go for a 2010 Optima equipped with a 2.0-liter Theta T-GDI engine. If you go for a 2011 to 2014 Optima, make sure that the car has gone through both the engine recall and fuel delivery hose recall. Finally, you can rest assured by buying a later model from the 2015 Optima and any of the fifth-gen model years where there were no engine issues reported so far.

Is the Kia Optima worth buying?

With all the main troubles and problematic model years considered, Kia Optima is a reasonable buy on the used car market. It has a fairly lower price than the competitors, and it offers a reliable ride for as long as you pick the recommended model years.

You can consider the Mazda 3 saloon or the Audi A3 saloon for direct competition with a bit more high-end interior luxury, but none of these cars is significantly more reliable than the fifth-gen Optima.

What are the years of Kia Optima I should avoid?

The main years of Kia Optima you should avoid are the 2011 to 2014 model years, as well as the 2015 model year that all came with engine issues.

What are the main problems with Kia Optima?

Is Kia Optima a good car to buy used?

Yes, Kia Optima is a good car to buy used as long as you avoid the 2011 to 2015 model years as discussed in this guide.

Is The Kia Optima a reliable car?

Kia Optima is a reliable car with minor issues in some model years that were sorted out by Kia in recalls, but it’s still worth checking if the car has gone through the recall or steer away from problematic model years completely.