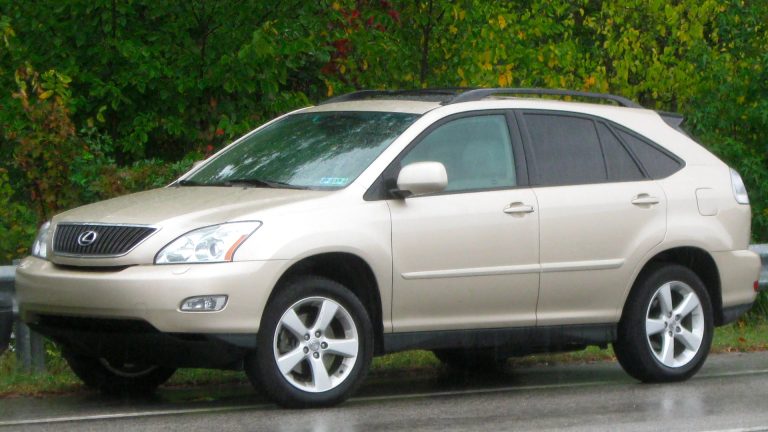 The Lexus RX is associated with exceptional style, excellent practicality, and a generously luxurious interior. It is an attractive vehicle, not just aesthetically but performance-wise too.

Despite the reputation the RX has achieved for itself, not all models deliver as promised. Some of its models replace satisfaction with stress. This article expounds on those Lexus RX years to avoid and why.

Every vehicle has its fair share of problems, and the Lexus RX is no exception. You must know these likely problems before you purchase the car to understand what you are most likely up against. Using this knowledge to construct a maintenance plan perfect for the vehicle will save you money and stress.

Here are the most common problems you should expect from a Lexus RX.

Drivers of the 2015 RX 350 complained the most about this issue. Some of the most common causes of the problem on the RX 350 were suspension problems, uneven tire pressure or mismatched tires, steering gear binding, and excessive wheel toe-out.

Drivers of the 2007 to 2015 RX 350 suffered the most from this issue. They reported that the engine leaked oil while they were driving.

The problem must be identified and resolved as soon as possible. The leakage can cause overheating, which in turn damages other components of the engine. Because replacing a faulty oil line costs less than $100, it is essential that you deal with it right away or as soon as possible.

The Lexus RX 350 features a sensor that recognizes when a downpour begins. It also senses how much rain falls and regulates the wiper’s speed to follow the obtained data.

If you have a 2017 RX 350 redesign, your chances of getting this problem are higher than drivers of other models. The major complaint these 2017 RX 350 drivers have is that the sensors have decreased efficiency at night. There have also been reports of the wiper malfunctioning even when the dial is at maximum sensibility.

The faults plaguing the infotainment system of the RX 350 are fortunately not severe enough to require extensive repairs. Some drivers, especially those owning 2007, 2010, and 2014 RX 350s, complained of failing Bluetooth features, navigation display, and radio.

Simply checking for and getting the latest software upgrades were enough to rectify this issue.

VVT problems have particularly plagued 2007 to 2008 and 2012 models causing them to have their check engine lights, AWD, and traction control warning lights illuminated. Moreover, if the camshaft timing oil control valve is faulty, the affected vehicles would store P0014 and P0012 error codes until they are cleared manually and the oil control valve replaced.

Some drivers of the RX 350 have reported transmission issues that cause their RX 350 to hesitate before moving and eventually lose power some days after. The 2013 model was most notorious for having this problem.

Some AC units of the RX 350 have been reported to blow hot air instead of cold air. The cause of the issue is attributed to a defective AC amplifier. Drivers of the 2007 to 2013 RX 350s were most affected by this issue.

Some RX 350s have been known to break down without warning despite their drivers’ care. The 2009 model was most notorious for keeping drivers stranded because of this issue. Improper lubrication, oil leaks, overheating, and detonation are the common reasons why this occurs on the RX 350.

It may seem minor, but this problem is a considerable safety hazard. Drivers complained of the front door of the RX 350 rattling while they were speeding on the freeway. In severe cases, the doors came loose, making it a danger to the driver, passenger, and other motorists who may be unfortunate enough to be within reach.

The cause of the issue has been tied chiefly to worn-out window regulators, misaligned doors, loose windows, and loose nuts and bolts. It is best if you get a professional to correctly identify where the issue is coming from and rectify it before you keep using the vehicle.

The function of the supplementary restraint system (SRS) on a vehicle is to deploy and protect its occupants when a crash happens. The deployed object could be an airbag or something that works like it.

Many 2007 to 2010 and 2013 to 2014 RX 350 models continually had the warning light on for days. When diagnostic tests were run on the vehicle, most returned error codes B0111 and B01166 which suggest a wet airbag module, faulty sensors, damaged airbag clock springs, or a depleted airbag backup battery.

Letting your mechanic handle these repairs is best, as working on the SRS system can get pretty dangerous with one wrong move.

Which Lexus RX years to avoid?

All the RX350 models are prone to having problems, but some have too much of it that you are better off avoiding them. Below are the Lexus RX years you should avoid if you want your money’s worth.

The 2007 model had the most problems. Drivers complained tirelessly about the issues that continually sprung up from the model to the point where others looking for an RX 350 learned to avoid the vehicle altogether.

Aside from the common problems with other RX 350s, like oil leaks, the 2007 model also had water pump leaks and rack and pinion leaks. These two leaks cost up to $4,000 to repair. For the safety and security of your pocket, you should avoid this model too.

The 2008 RX 350 is reliable but features the most common problems you can expect from a Lexus RX. You can expect cracked dashboards, power steering system leaks, and ignition coil failures with the 2008 model, making it inconvenient as these issues often materialize at odd times.

Though the number of complaints for the 2010 model year is not like that of 2007, owning this car is still an inconvenience. It had massive oil leak problems and loss of oil pressure. The AC amplifier was also prone to failing quite early, leaving you with a faulty air conditioner.

Furthermore, you would have to upgrade the heater, radio, and GPS software frequently. Practically all the common problems the RX350 could suffer were present in the 2010 model.

The main problem that makes the 2016 RX 350 model undesirable is its acceleration issue. Drivers have complained about its speed and acceleration even when the brake pedal is depressed.

The model was also notorious for its stalling engine. The structural integrity was also another cause for concern, as many drivers reported the sunroof exploding unexpectedly. The model is a dangerous problem and a potential cause of crashes and accidents.

The 2017 model inherited the engine stalling and sunroof explosion problems from the 2016 model but had some additions that made the 2016 model look better.

There are some electrical problems and a fault in the AC drain plug design that promoted damage to the carpeting and padding. It also had brake and transmission issues.

The Lexus RX is incredibly reliable and would serve you well if you buy a suitable model. Here are the best Lexus RX years you should consider when purchasing.

The latest RX 350s come with the latest advancements in innovation designed to improve the driver experience and safety. If you are looking for a used RX 350, the 2018 model is your best bet for the most quality and durability. The vehicle has proved its worth within its five years of existence.

Is the Lexus RX worth buying?

The Lexus RX is a reliable vehicle, and its price is quite reasonable considering its extended range of features. If you buy a suitable model, you get an excellent dose of luxury and performance in one package.

If you take cars as investments, the RX 350 is a worthy investment. It is one of the top five luxury vehicles that maintain its value well in the market.

Which year Lexus RX is most reliable?

The 2018 Lexus RX is the most reliable in the lineup. It has near-perfect safety ratings and fewer complaints.

What is the most common problem with Lexus RX 350?

Oil leaks, transmission, and AC problems are all common issues you can expect to find on the RX350. The oil leak problem is the more prevalent issue for all Lexus RX drivers.

Which Lexus RX model should I avoid?

It would be best if you endeavored to avoid the 2007 RX model at all costs. It has the most complaints and the common problems the RX model tends to suffer from happen in their severe state on this model.

The Lexus RX 350 lasts about 250,000 miles on average. The vehicle can last longer with the proper care and maintenance, making it a reliable car, whether you buy it directly from the factory or the used market.