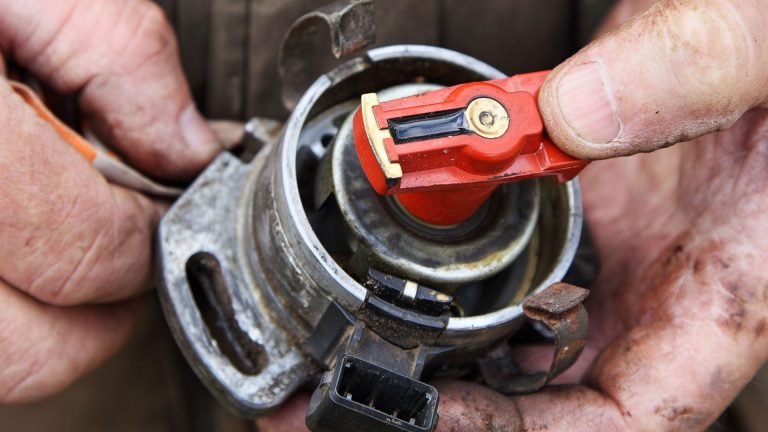 An internal combustion engine generates power as the spark plug ignites the air/fuel mix in the chambers. However, there are some other components involved in the process of activating spark plugs, and these are ignition coils and the distributor.

While the distributor is used in older vehicles, even some modern cars use it and that raises some questions. The most important is – what happens if the distributor goes bad? If distributor problems occur, you won’t be able to start or run your car properly. It’s therefore crucial to recognize the bad distributor symptoms on time so you can deal with the problem, and our team will help with that.

What’s a distributor in a car and what does it do?

To understand how a car distributor works, you first need to understand how spark plugs ignite the combustion mix. Every gasoline-powered car with an internal combustion engine uses an ignition coil to power the plugs with high voltage.

Since the battery can’t produce enough voltage capacity to power spark plugs, ignition coils use the current from the battery and convert it into high voltage. That’s also where the distributor comes into play – it’s a switch that routes high voltage produced by the coil in a precise pattern.

It ensures that the current reaches the plugs at a precise time, so the firing order of the engine remains under control. More importantly, the distributor transfers high-voltage power generated by the coil into each of the spark plugs. It does it through individual distributor terminals that are each connected with a spark plug wire.

That’s how all the spark plugs receive power at a precise time, and the function of the distributor is directly related to the engine control unit (ECU). There’s a triggering mechanism that follows the performance of the distributor and reports back to the ECU. The computer uses this information and the information from other engine-related sensors to determine the right timing for firing spark plugs.

Consequences of a bad distributor

If the distributor of your car’s ignition system fails, it triggers a series of problems with your engine. First of all, it gets difficult to start the engine. Your engine might try cranking but it won’t start, and it’s a problem closely related to the spark plug performance.

After all, if the distributor isn’t working, spark plugs can’t receive the power needed to trigger the combustion. Your car might also start making odd noises when firing the cylinders, and it also leads to increased gas emissions. This could cause you to fail your emissions test, and it’s not the best thing for the environment.

Main signs of a bad distributor

Well, now you know the crucial role of a distributor in your car for powering the spark plugs with voltage sent from the ignition coil. Like in the case of bad spark plugs, you might have problems starting the engine if the distributor fails. Besides that, here are some other crucial symptoms of a bad car distributor:

Another consequence of a bad distributor could be an increase in gas emissions caused by leftover fuel in the combustion chamber. If the fuel in the engine doesn’t burn out completely, it will retract through the exhaust pipe and it could ruin the catalytic converter and increase gas emissions.

For your engine to keep running properly, spark plugs need to maintain a precise firing cycle. If the distributor goes bad, chances are that the cycle will be disturbed and a cylinder might be left unfired. Misfires are a sign that something is wrong with the combustion cycle, and you’ll feel a jerking motion in the cabin.

Misfires can also happen while driving, and it’s an unpleasant sensation behind the wheel. If the distributor goes bad, you can also feel the engine backfiring, which is when unburned fuel is left in the cylinder. You can feel the backfire in the exhaust pipe and it might trigger black smoke which is bad for the catalytic converter and gas emissions.

You shouldn’t keep driving if your engine shakes and vibrations will probably continue progressively. The engine that isn’t firing properly isn’t safe for driving long-term and you should fix the distributor issue as soon as possible.

Squealing noises coming from the engine

The squealing can also be a sign of other malfunctions in your vehicle, such as an A/C unit fault, but a bad distributor will result in a louder squealing sound.

Like with any other significant combustion issue, the bad distributor will result in the check engine light glowing up on the dashboard. Along with it, you’ll notice reduced engine performance as a result of all those misfires and backfires that we mentioned.

A bad distributor just results in poor spark plug firing precision, so your engine won’t be operating at full capacity. On top of that, it’s also possible that your engine will stall out in case the power distribution to spark plugs gets completely cut.

After going through the bad distributor symptoms, you’ll be ready to tackle the problem on time in case a distributor fails in your car. While some of the symptoms might be similar to symptoms of bad spark plugs, replacing the plugs won’t help in case of a bad distributor.

Make sure to immediately check the distributor with your mechanic as soon as the first symptoms occur to prevent having to deal with your engine completely stalling.

How can you tell if you have a bad distributor?

You can tell that you have a bad distributor by the noises following distributor damage such as popping sounds from engine misfiring and backfiring and squealing noise from the engine compartment.

What problems can a bad distributor cause?

A bad distributor can cause ignition and engine firing problems as it transfers the voltage from the ignition coil to the spark plugs.

A failing distributor produces a high-pitched squealing sound and popping sounds from engine misfires and backfires.

Can a bad distributor cause rough idle?

Yes, a bad distributor can cause rough idle as it controls the current delivery to the spark plugs.