What does a thermostat do in a car? 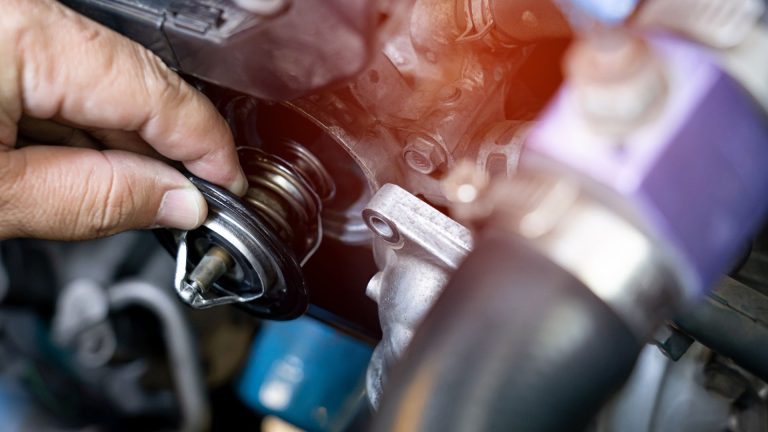 You may not think much about the cooling system of your car, but it’s one of the crucial systems for your vehicle. It lets the engine cool down and maintain operative temperature without overheating and damage caused by heat and friction. However, have you ever wondered – what does a thermostat do in a car?

A thermostat controls the flow of the coolant in and out of the engine based on the coolant’s temperature. It’s a crucial role and it leads the coolant back into the radiator for cooling once it heats up from the engine’s temperature. This guide will help you understand the role of a car’s thermostat a bit more clearly, and you’ll realize why it’s so important to change it if it stalls.

What is thermostat and how does it work?

To understand the role of a thermostat in your engine’s cooling system, you first need to understand how it works. The thermostat is placed in thermostat housing next to the engine head, and it’s connected to the water pump and the radial impeller via a thermostat bypass hose.

A thermostat is a valve that controls the flow of coolant in and out of the engine based on its temperature. For successful operation, it’s always covered in coolant as the housing is connected to the engine’s water jacket.

It, therefore, recirculates back into the engine until the engine heats up. Once it heats up and reaches operative temperature, coolant picks up the heat from the engine and therefore gets hot. At this point, the bypass valve closes, and the main valve of the thermostat opens.

Through this valve, hot coolant goes into the radiator via a hose and cold coolant from the radiator gets into the engine. So, if your car is overheating and then going back to normal, it’s likely that the cooling system cycle is disrupted and there’s something wrong with the thermostat.

Hopefully, the role of the thermostat now seems clear, but you might be wondering about how it senses the coolant’s temperature. Well, there’s an expanding agent which opens the main valve once the temperature gets in the range of 160 to190 degrees Fahrenheit.

So, you can say that the thermostat and its components serve a delicate and important role in keeping your engine’s temperature down as it starts to generate heat.

Parts of the car’s thermostat

Although the entire thermostat fits in your hand, it’s a complex valve that consists of several parts that could malfunction. There’s a thermostat frame on top of which the main valve of the thermostat is located. It lets the coolant flow into the hose and the radiator once the coolant gets hot.

On the other hand, there’s the bottom valve or the bypass valve which lets cold coolant recirculate through the engine until it picks up the heat. There are also two springs and the charge cylinder that help control the opening of the main valve based on the coolant temperature by moving up and down.

Usually, valves could be stuck open or closed when the thermostat is damaged, leading to improper operation and coolant circulation to the radiator.

Signs that your car’s thermostat should be changed

If your thermostat is working properly, the cooling system will successfully remove excess heat from the engine unless there’s a problem with the radiator operation or a bad radiator fan or hose. However, if the thermostat itself fails, you’ll end up having a problem with coolant recirculation.

Whether it’s a bypass valve or the main valve problem, the coolant won’t travel through the water jacket of the engine as it should. So, it won’t be able to remove the heat, and this all leads to engine overheating. Here are some of the main signs that your car’s thermostat isn’t working properly:

Coolant leaks appear as a puddle of pink fluid, but they might also be of another color as there are different coolant colors. If the puddle has a sweet scent, you’ll know it’s a coolant leak that could be caused by a faulty thermostat.

The most important part of the thermostat is the main valve, while the bypass valve is also crucial for proper coolant recirculation. It’s important to check the thermostat every once in a while as these valves might start to malfunction and get stuck.

If the main thermostat valve is stuck open, coolant will be flowing into the radiator consistently. Although it might appear like it’s a better option than the engine that can’t cool down, the damage level is the same. Overly-cooled engines also tend to wear off faster and they don’t run as efficiently as they should.

So, you might end up with increased fuel consumption and gas emissions, as well as engine problems. this is why a thermostat is so important – it always regulates the engine cooling according to the situation. On the other hand, if the valve gets stuck closed, the engine won’t be able to cool down, and your engine will be overheating.

If you’ve been asking yourself “what does a thermostat do in a car”, now you know all the important details. While the radiator and its fan significantly help engine cooling, the thermostat is a small piece holding the system together.

A failed thermostat will almost certainly cause your engine to run too hot or even too cold, and neither is a good thing. Luckily, replacing it is fairly easy and you should have the vehicle’s thermostat inspected as soon as you spot a fluctuating temperature gauge or sudden overheating.

How do you know if your car thermostat is bad?

You can know if your car thermostat is bad if you spot coolant leaks, your engine overheats too fast after starting, or there’s a coolant flow under the radiator cap even when the engine is cool.

What happens when a car thermostat goes bad?

When a car thermostat goes bad, its valves usually get stuck closed or stuck open, causing a constant flow of coolant into the radiator and an overly-cooled engine. If the valve gets stuck closed, the coolant won’t be able to reach the radiator, resulting in frequent overheating.

Can I drive a car without a thermostat?

You can drive a car without a thermostat for a while, but it’s not advisable as it can cause permanent damage to engine parts in case of overheating.