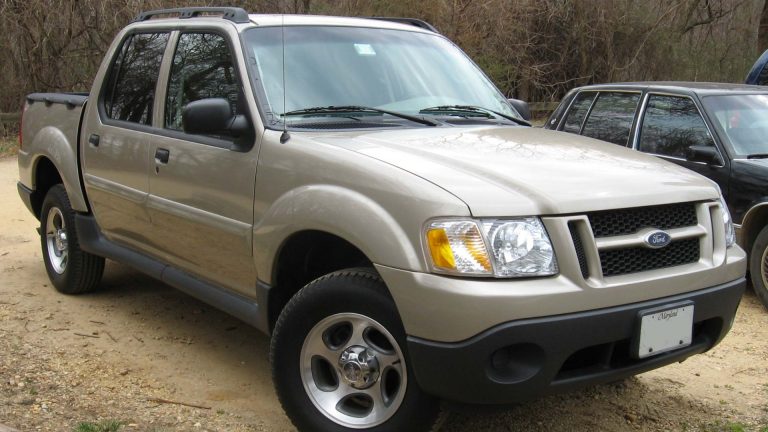 Ford made the Explorer Sport Trac stand out, not through aesthetics, but utility. The utilitarian vehicle delivers well on its promise with dependable engine options, cool but practical cabin, and excellent towing ability. The midsize SUV is perfect for carrying five passengers with a medium amount of cargo.

Maintenance routines work best when they are personalized to the vehicle’s needs. Therefore, it is essential to know the kind of problems your car is prone to get before purchase so you would understand what necessary measures you should put in place for each maintenance session and how much it costs.

However, to increase safety, fully adjust the head restraint before you start operating the Sport Trac. Ensure the restraint is as high as your head, and endeavor to do the same for the other seats to protect your passengers.

The Sport Trac of 2001 to 2005 were most riddled with a leaking coolant problem due to their thermostat housing. Drivers reported that the coolant leaked into the ground, giving off a sweet smell.

If you are buying a Sport Trac equipped with a 4.0-liter engine, you have to be on your guard as they are also prone to having coolant leaks.

The blend door actuator is a miniature HVAC motor that works with your vehicle’s temperature sensors to handle its climate control system. When the actuator is faulty or failing, it causes the blend door to get stuck in one position, resulting in outlet temperatures colder or hotter than the desired setting.

Faulty blend door actuators are common on the Sports Trac, with drivers reporting that they also hear clunking and thumping noises from behind the dash. Some claimed that their air conditioners stopped working correctly due to the problem.

The dash cluster displays several indicators helpful in telling the internal state of the vehicle. When it fails, however, the display would be inaccurate, unworkable, dim or flickering, or even at a perpetual reading of zero. While electrical issues are the most notorious cause of dash gauge cluster failure, debris accumulation is also a factor.

First-generation Sport Trac is best known for having this issue excessively. Drivers complained of their dash gauge cluster turning off and on intermittently when the key is not in the “on” position. The exact cause of this problem was a wiring issue.

Electrical issues are the third most commonly reported issue on the Ford Explorer Sport Trac. The vehicle is famous for its tendency to develop electrical faults frequently. Though the cost of repairs for electrical issues is not as much as for the other two more common problems, it is still a considerable inconvenience for drivers and passengers alike.

The electrical problems to expect on the Sport Trac include, but are not limited to, cars dying during a ride and defective fuel and other gauges. The Sport Trac model year that is most riddled with the most complaints about its electrical system is the 2004 model. It turned out to be something to avoid primarily due to the inconvenience it caused drivers.

Problematic transmissions are the second most popular problem drivers have experienced on the Sport Trac. Some of the Sport Trac models, especially the 2002 and 2007 models, were prone to constantly breaking down in the middle of a ride due to transmission issues. Drivers experienced transmission failure, a slipping transmission, and difficulty shifting more when using those two models.

A faulty transmission is inconvenient not only for movement but also for the pocket. Repairing a faulty Sport Trac transmission is expensive and tiring as the problem is sometimes recurring, especially when you opt for easy and inexpensive repair options. To experience less of this issue, you should avoid the 2002 and 2007 models.

Issues with the engine are always costly and, more often than not, dangerous. Some Sport Trac models do not have too many problems with the engine, but those of 2001, 2005, and 2007 are notorious for their constant engine problems. Other Sport Trac models have their own share of engine problems, but those three model years are best avoided for this reason.

The typical engine issues you would likely face when using a Sport Trac are chirping belt noise, broken timing chain adjusters, and a constant check engine light warning. It is best to address the issue as soon as they manifest, as delaying repairs will cause you to spend more and increase your risk of complete engine failure.

Looking at the common problems the Ford Explorer Sport Trac is prone to, we see that some model years have more complaints than others. Here are the Sport Trac years to avoid if you want to get good value for your money.

About 337 complaints have been leveled against the first generation of Ford Explorer Sport Trac, making them the least reliable Sport Trac you can think of buying. The bulk of its problems was centered on engine and transmission issues.

The 2001 model, the very first of this generation, had the most problems, followed by the 2002 model. Transmission slips on the 2001 model were alarming, while the 2002 Sport Trac inherited the same problem and added O/D light blinking to its list of prominent issues. Transmission failure was most common for the 2002 and 2003 Sport Trac, making them great and expensive inconveniences.

Transmission problems were so bad for the first-generation Sport Trac that the transmission issues were more than double that of the engine or electrical and body issues.

The 2007 Explorer Sport Trac is best avoided at all costs. It is the one model year that had all the common problems Sport Tracs get but on a recurrent and annoying level. It had issues with coolant leakage, overheating caused by a radiator leak, a broken heater blend door, wheel bearing failure, rough idling, stalling, and a cracked intake manifold, among others.

Despite its rough start, the Ford Explorer proved its worth in some model years. Here are the best Ford Explorer Sport Trac years to search for when making a purchase.

Ford made up for the inconveniences of the Sport Trac past and saved the best for the last. Perhaps the disappointment of the 2007 model gave them the jolt of inspiration they needed to create models adequate to convince us of its reliability.

Though the vehicle was discontinued after the 2010 model year, it still managed to deliver on its dream and leave a good legacy on the market. The latter models offered space and comfort and eliminated the bulk of the problems that made the Sport Trac inconvenient.

Is the Ford Explorer Sport Trac worth buying?

If you wish to buy a Ford Explorer Sport Trac, you must choose a good model year to make sure you get the most value for your money. The last three model years are the ones you should focus on, totally avoiding all from its first generation of production.

Most Sport Trac has a much lower resale value than other vehicles as the problems it is prone to face depreciates its value even faster. However, if you find a suitable model and maintain it correctly, you can use the Sport Trac for over 200,000 miles or 17 years. Some drivers have testified to using it for close to 300,000 miles.

What are the problems with Ford Explorer Sport Trac?

Many of the Ford Explorer Sport Trac model years are unreliable as they were prone to developing many problems, especially model years of the first generation. Only the 2008 to 2010 model years proved to be quite reliable.

What year Ford Explorer Sport Trac has the most problems?

The 2001 and 2007 Ford Explorer Sport Trac had the most problems. That of 2007 was more pronounced since it was the worst in the second generation of Sport Trac, with the other model years of this generation giving a better performance than it did. Some drivers believe the success of the 2008 to 2010 models was due to the hard blow the 2007 model cast on the Sport Trac’s reliability.

Why did Ford stop making the Explorer Sport Trac?

Ford discontinued the Ford Explorer Sport Trac in 2010 due to a drop in demand caused by the recession and high fuel prices. Some theorize that the safety concerns that plagued most of the model years of the Sport Trac also had a hand in its demise.