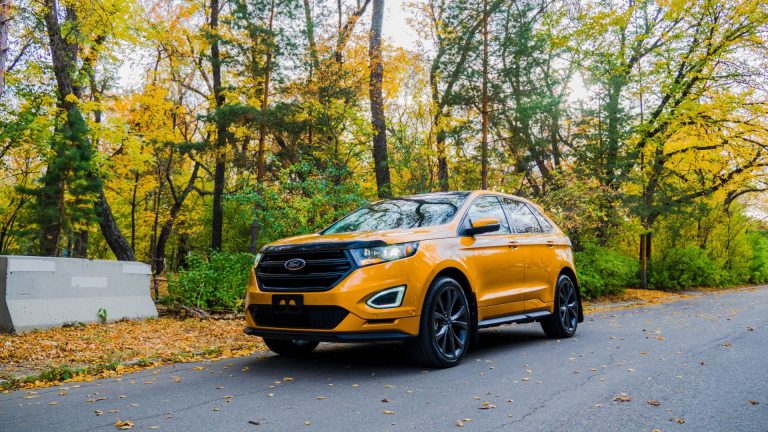 Ford is reputed to put its customer’s needs first in whatever they do. That makes it legendary and attracts many loyal users to Ford for its efficiency, quality, and value.

Like every other vehicle in the market, some years of production yield good results. In contrast, at different times, the product is far from the standard they have set in the market or is undermining their capabilities.

The Ford Edge is one of the Ford lines produced that is renowned for its driving experience, which is better than that of competitors. It is reliable and practical, with good fuel economy and excellent performance. This article exposes the Ford Edge years you should avoid and which ones you should consider for purchase.

Despite its good reliability score, Ford Edge has some problems that are common to it. They vary from light to severe, with some years being recalled due to the severity of the issue.

Unusual noise from the wheel area

The clicking noise emanating from the wheel area was widespread for the 2007 to 2014 models. They usually begin after 75,000 miles and are mainly attributed to being caused by loose plastic cladding or one with too much space between it and the wheel. Drivers mostly resolved the issue by replacing the plastic cladding.

A lit door ajar light is an indication of an improperly secured door. On the Ford Edge, however, it could be on even when the door is securely locked. It is usually due to a malfunctioning switch inside the door latch mechanism, which gives off the impression of an unlocked door to the electronic control unit (ECU).

The issue may seem light at first but evolve to something more as it can cause other parts to malfunction too. For instance, it can affect the key fob and prevent it from locking the doors. It can also cause the dome lights to turn on when you least expect it.

The Ford Edge has occasional airbag problems, but none were more remarkable than that of the 2016-2017 models. Before then, the SUV had faced an airbag issue with its 2007-2008 units which they recalled in January 2017 and offered free passenger frontal airbag inflator replacements for drivers willing to continue with the vehicle.

That of 2016-2017 failed the Federal Motor Vehicle Safety Standard (FMVSS) requirements and was outright labeled unsafe. The cause of the airbag issue was the quick degrading of the propellant in the inflators due to changing temperatures and humidity. Therefore, when engaged, the airbag would detach from its assembly or not fully inflate, leaving the driver with higher risks of harm.

2007, 2008, and 2011 Ford Edge were famous for constantly sliding windshield seals. The adhesive used to put it in place was bad and had to be frequently repaired as it kept happening even after being reinforced with a new seal some months before.

In extreme cases, rainwater got to leak into the SUV and soaked the floor and other items, opening opportunities for more problems. The windshield had to be removed completely for the foam seal to be replaced.

Occasionally, the air conditioning system can suffer a failure, but that of the 2011 Ford Edge was terrible. Most drivers reported that the AC of their Ford Edge does not work at all in hot weather or churns out hot air, especially after driving its first 120,000 miles.

Replacing the cooling fan and timing belt rectifies this issue, but the repair cost is quite expensive. The cost of repairs could reach well over $1,700.

The 2009 to 2010 Ford Edge models were notorious for their easily corroded fuel tanks which ultimately developed leaks, creating a fire risk. Ford had to recall those vehicles for inspection, with those in severe conditions being replaced for free.

After 80,000 miles, the 2007 and 2008 Ford Edge models usually had transmission issues which sometimes left the driver suddenly immobile in the middle of a ride. The tricky part about the problem was that while running a diagnostic test, some vehicles experiencing this issue released normal test results.

Transmission repairs are expensive and cost some aggrieved drivers about $4,000 to rebuild or replace the malfunctioning system.

Which Ford Edge years to avoid?

You need to note the Ford Edge years to avoid, especially if you buy from the used vehicle market. The repairs you may need to have done afterward can thwart the purpose of you buying it secondhand and make you spend a lot more.

The first generation of Ford Edge had little success as only the 2009 and 2014 models did not have so many issues to the point they had to be avoided. It is believed that Ford rushed most of the vehicles of this first generation into production, which is why there were high numbers of complaints about the car at the time.

The most common problem for this generation of Ford Edges was the door sensor which always kept its ajar light on, making the ECU mark it as poorly secured and making it difficult to lock the vehicle from afar using the key fob. Other problems Ford Edge had in this generation were transmission and brake issues, together with engine problems.

The cost of repairs and the inconvenience of these Ford Edge models make them undesirable and not worth the money. It would be best to avoid them at all costs, especially when buying a used vehicle.

The second generation of Ford Edges did far better than that of the first generation. Having learned from their mistakes, they gave a better delivery, reflected in their current reliability scores.

However, if you are looking for a used car, you would be better off avoiding the 2015 and 2016 models, especially those with 60,000 miles on them. The 2015 Ford Edge is prone to electrical faults affecting most of its technologies. There were reports of the infotainment system freezing, the camera result not reflecting in the display when the car is in reverse, and frequently failing GPS.

The structural integrity of the 2015 Ford Edge was also questionable, as the door seal was not strong enough, causing leaks. Other drivers reported hearing random noises from the car and a serious problem with the oil pan gasket, which caused oil leaks. The oil problem was severe and could not be resolved by simply replacing the oil pan gasket.

The 2016 Ford Edge had the same issues as the 2015 model but was less exacting. In addition to the electrical fault and engine problem, this model had an acute airbag issue which caused the vehicle to be recalled for fixing.

Some Ford Edge years have fewer problems, especially those of the second generation. Here are the best Ford Edge model years.

Is the Ford Edge worth buying?

The Ford Edge is worth buying as far as you know which one to avoid. If you are looking for an older option, the 2014 model is worth your money. The newer versions all come with innovations that make driving easier and safer.

So far, Ford has recorded success with these recent versions and receives good safety and reliability ratings from drivers. Despite its rocky and complaint-filled start, Ford Edge has finally lived up to its potential, making it an SUV you would enjoy riding to its ripe old age.

What year did Ford Edge have transmission problems?

The Ford Edge models of 2007 and 2008 had the most transmission problems. They were bad to the point that the transmission would shut down without warning while the car was in motion.

Ford Edges are reliable and provide good handling, performance, and fuel economy. You only have to steer clear of most of the models from its first generation with their many faults and misgivings.

The worst Ford Edge to buy is the 2011 model. It had more problems than all the other first-generation models and cost much more to repair and maintain.

Which Ford Edge year is most reliable?

The 2014 Ford Edge is the most reliable, with a recorded mileage of over 100,000-200,000, which is pretty high for the SUV. It is surprising because it is part of the first generation of Ford Edges, which contains the worst ever produced.