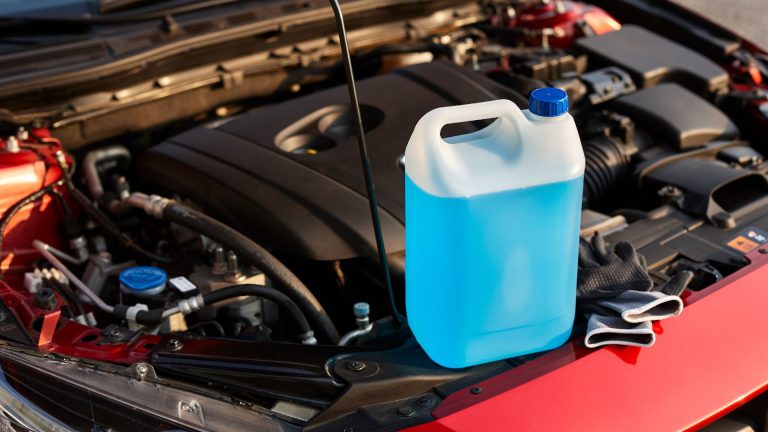 Coolants play an essential role in regulating how well the engine runs. It is important to check the coolants regularly because there could be an antifreeze leak that could create a hazardous situation for your vehicle’s engine.

Your engine can overheat during very high and low-temperature conditions if your vehicle does not have the correct amount of antifreeze. Your engine coolant can leak even if your car is parked. One of the most prevalent causes of antifreeze leakage is damaged components in the cooling system. There is most likely to be a damaged head gasket, radiator, water pump, or even a torn hose.

When you turn off your ignition, the antifreeze may leak from a bad heater core because the coolant manages to sit in it when the heating is switched off. When you turn on the engine and switch on the heating, the fluid will pump back into the primary cooling system. Tons of liquid run through your car, and with time you may eventually experience a fluid problem.

Antifreeze (coolant) leakage is not so rare, so you do not need to worry much about it since there are solutions. In this article, we will explore the possible causes of your car leaking antifreeze when parked.

Why is my car leaking coolant but not overheating?

The problem with cooling systems starts long before your engine overheats. If you notice the problem early, you will save more money intended for repairs.

Antifreeze is one of the essential parts of a cooling system. If it has a leakage problem, it is necessary to resolve it quickly before the engine starts overheating and causing further damage. There are some reasons why your car leaks antifreeze but does not overheat, and some of these reasons include:

The hose of your vehicle transports coolant (antifreeze) from one point to another. When there are holes or cracks in the hose, there is antifreeze leakage. If there is a constant leakage of antifreeze over time and you fail to address the problem, there won’t be any coolant left in the radiator, which could affect the cooling system stream, and cause overheating of the vehicle.

The heater core is responsible for bringing warm air from the cooling system into the passengers’ cabin. If the heater core cracks, you might perceive a sweet smell when you are in your car. The sweet smell is from the antifreeze, and it indicates that there’s a leakage even when you haven’t noticed it.

When the heater core becomes severely damaged, antifreeze may leak into the car frame from the engine, and this can be hard to fix.

Your radiator cap is typically put under a high amount of pressure, and this can cause it to weaken or wear out eventually. The tension in the radiator can press against a faulty cap and lead to loss of fluid or antifreeze on the ground. However, if the worn-out radiator cap is the cause of the leakage, you can easily have a quick fix by replacing the radiator cap.

Why is my car leaking antifreeze when parked?

There are other reasons why your car is leaking antifreeze when parked, and they include:

Your car’s engine is designed to withstand extreme temperatures while operating. The engine absorbs and generates a large amount of heat, and while driving, it is impossible to stop the corrosion of some of the engine’s components due to water or moisture in the car’s cooling system.

Antifreeze leaks can be spotted in the metal parts of the engine’s cooling system, which have experienced corrosion with time due to prolonged usage or poor maintenance. A significant example is radiator rusting, which can cause the outcome of cracks and holes that causes your vehicle to leak antifreeze when parked. When the radiator is overused and the cooling system is entirely operational, the radiator tubes become weaker, and holes are created, which results in leaks.

Leakage of the radiator cap

The water pump ensures an appropriate circulation of coolant in the cooling system. It is found in the bottom part of the engine, and it is connected to the lower house of the radiator.

The connection of the water pump to the radiators may corrode or become loose over time. This leads to the antifreeze leaking when your car is parked. When the water pump cannot circulate across the cooling system completely, it may cause the engine to overheat.

The expansion tank is responsible for supplying antifreeze to the radiator. It is located beside the engine and looks like a plastic container. It is connected to the radiator through a rubber hose.

The coolant (antifreeze) is conveyed into the expansion tank through the radiator when the engine heats or cools down. The expansion tank tends to wear down with other connected parts as time passes. This can lead to the breakage of the tank’s plastic resulting in coolant leakage. A leaking coolant tank can also result in antifreeze leakage.

The head gasket regulates excess pressure produced by the engine and a wide range of temperatures for the engine. If a head gasket gets blown up, it can lead to the leakage of antifreeze when your car is parked. It also decreases the coolant level making it impossible for the cooling system to cool the engine.

Is it normal for coolant to drip under the car?

How do I find out where my coolant is leaking from?

The first step in identifying a coolant leak in your car is scanning under the vehicle for any coolant puddles. If you notice any, an antifreeze is leaking from your vehicle’s cooling system.

Inspect under the hood while the engine is running to check for any leaking fluid. You can easily track the fluid back to the source if you find any. Follow these procedures to locate coolant leaks in your vehicle:

Common fixes for antifreeze leakage when your car is parked

Here are some steps to take if you notice that your antifreeze leaks when your car is parked:

Fixing a cracked coolant reservoir is quite precise. You need to get a silicone adhesive and apply it to the part of the reservoir that is damaged. If the crack or puncture happens to be severe, it will help if you replace the tank immediately.

Installing a new heater core is the best action to take if you notice the cause of the antifreeze leakage. It is recommended to make the replacement with the same type of heater core.

The only way to fix a damaged water pump is by replacing it with a brand new one. This will help increase the efficiency of the engine.

Suppose you experience an antifreeze leakage when your car is parked; you shouldn’t worry much. Different parts make up the engine’s cooling system, and if there’s a failure of any paper, the engine starts to develop problems. A low antifreeze level can be caused by a hole or crack in the hose, a damaged radiator, radiator caps, a damaged head gasket, or a faulty water pump. It is essential to fix these problems immediately to prevent further damage to your engine.