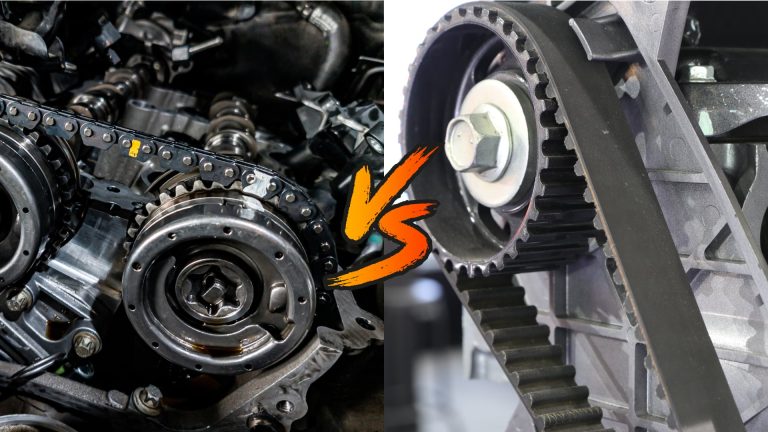 If you aren’t much of a car guy, terms like timing belt and timing chain might seem confusing. You don’t need to know much about them to drive your car, but if there’s a problem with your engine, that’s where the knowledge comes in useful.

Essentially, both the timing belt and timing chain synchronize the timing cycle of your engine, enabling it to run smoothly and efficiently. Both synchronize the opening of camshaft valves with the stroke of pistons on the crankshaft. So, if they seemingly share the same purpose, why is there a debate on timing belt vs timing chain, and what’s a better solution for the engine? Let’s find out together in this detailed guide.

The timing cycle of your car’s engine is a crucial thing as it allows for proper combustion and prevents misfires and physical damage to engine parts. Both timing belts and timing chains serve the same purpose – they synchronize the rotation of the crankshaft and the camshaft.

The crankshaft is the shaft that the pistons are attached to, and it converts the force from the moving pistons into a rotational motion. On the other hand, the camshaft is the engine’s upper shaft with cams that control the opening and closing of the engine’s valves.

This way the piston compresses the combustion mix and a spark plug is used to light it up. The cycle starts over as the piston gets forced down again by the combustion. This isn’t only important to understand how your engine works – it describes the action that the timing belt and chains enable.

If you have an interference engine where the cylinder head is closer to the pistons, breaking of the timing belt or chains could result in pistons going through the cylinder head. In other words, your engine gets ruined and that’s the worst mechanical breakdown you could have in a car.

A short history of timing belts and chains

Back in the day when the American automotive industry was still developing, the most powerful V8 engines had timing gears. It represented a gear connection between the crankshaft and the camshaft, and gears were used to push the engine rods and open/close valves.

After that, the time came to make things a bit more convenient, so the timing chain was introduced. It does exactly what you would guess from the name – it controls the engine’s timing cycle. The chain is a great solution as it represents a powerful bond between the rotating engine components and it shouldn’t break.

It’s a metal chain, so it’s almost impossible for pistons to break into the cylinder head even after hundreds of thousands of miles passed. It’s a more durable solution, so bad timing chain symptoms shouldn’t easily occur regardless of the mileage.

However, timing chains were more expensive to produce, and they added up weight to the engine. So, car manufacturers started producing timing belts. The belt was a simpler solution, but was it a better option than the timing chain? Let’s go over the main arguments to provide you with a clear answer on the matter of timing belt vs timing chain.

Timing chains are mostly made of high-grade steel and are quite durable and stretch-resistant. This helps maintain a synchronized rotation of the crankshaft and the camshaft, and due to their materials and construction, they last considerably longer than timing belts.

However, there are timing chain guides that sometimes need to be replaced. Manufacturers state that these guides should be replaced on a certain mileage, usually between 100,000 and 150,000 miles. A regular timing chain should last throughout the life of the vehicle. However, it’s not always the case, as the chain slightly stretches over time.

That’s why it’s important to at least change the timing chain guide rails in the mentioned mileage span. These rails hold the timing chain in place and prevent it from moving or slipping due to shocks and movement in the engine area. If your motor mounts fail, moving inside the engine’s compartment can cause several issues, and it is one of the possibilities.

If the timing chain slips from the pulleys, your engine’s timing will be off, and this results in frequent misfires or an inability to start the engine. The worst-case scenario is that the pistons go up against the cylinder head and break the engine’s components physically in interference engines.

Timing belts are a more cost-effective solution for car manufacturers, and many modern cars have belts instead of chains. These are especially present on low-displacement engines that are quite frequent these days.

It’s a rubber belt designed with additives to make it more durable, but it still stretches over time. So, it’s important to check on it during regular servicing and pay attention to your engine’s operation. If there are signs like misfires, oil leaks, or ticking noises coming from the engine compartment, you’ll need to replace them.

Timing belts are known to go out after around 100,000 miles regardless of the vehicle. You can check the exact recommended replacement period for your engine in the owner’s manual. It’s crucial to replace the belt when needed to prevent having to do a complete engine rebuild.

It’s only natural that these last fairly less than timing chains since the rubber material can degrade due to heat and friction. However, they are much less expensive to replace than a timing chain, although a timing chain goes out much rarer.

The verdict on timing belts vs timing chains

Well, after going through all the benefits and downsides, timing chains are a much better option, especially for high-capacity engines. However, timing belts also do the job and as long as you pay attention and replace them on time, you won’t have to think about any troubles with your engine.

You can’t replace a timing belt for a timing chain, although there are some conversion kits. The vehicle’s manufacturer knows why they’ve integrated a belt instead of a chain, and you should just apply regular servicing. There’s no guarantee that a timing chain will last forever either, and their replacement is much more expensive. So, the truth is somewhere in between.

It all comes down to the manufacturer’s decisions in terms of the timing belt vs timing chain dilemma. It’s not something you can affect, but it comes in handy to know the symptoms of a bad chain or belt so you can act on time.

If you drive a non-interference engine, even a broken belt won’t result in pistons breaking out into the cylinder head, so you’ll be able to drive a few miles more until you change it.

Why do manufacturers use timing belts instead of chains?

Manufacturers use timing belts instead of chains to save up on production costs and make the low-displacement engine a bit lighter.

What is the advantage of a timing belt over a chain?

A timing belt can often be quieter than a timing chain, and it costs much less to replace.

Is it better to replace the timing chain or the engine?