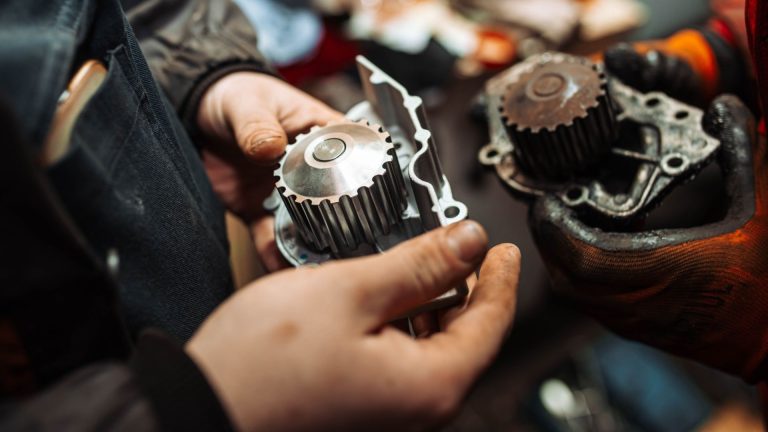 To maintain operative temperature and prevent overheating, your engine needs proper distribution of the coolant liquid. However, as the water pump failure symptoms start showing up, you might notice that the temperature goes up quite fast.

The water pump is essential for coolant distribution through the engine block and it requires timely replacement. You can find the replacement period for your car in the owner’s manual, and our team will lead you through the signs of a failing pump just in case.

What does a water pump do in a car?

The pump leads the coolant through the cooling system hoses and it helps lower the engine’s temperature. This simple task saves your head gasket, cylinder heads, and pistons from damage caused by excessive heat buildup.

Most importantly, the water pump maintains the consistency of the cooling fluid circulation through the system. It prevents the liquid from getting stuck which would cause leaks under pressure. If the pump malfunctions, the coolant simply remains stuck within the radiator and it can’t reach the engine block.

This leads to instant overheating and it’s a sign that you should replace the water pump as soon as possible. On average, water pumps in cars last between 60,000 and 90,000 miles. Some mechanics state that you should change the water pump during a timing belt change, just to be safe. Still, if it goes out earlier than it’s supposed to, you should be prepared to recognize the symptoms.

Indicators of a bad water pump

If your water pump goes bad, coolant liquid won’t be able to exit the radiator and do its job. So, the most common symptom is excessive overheating as the engine reaches operating temperature. If you see sudden temperature raises by looking at the gauge, you should stop driving and have the cooling system inspected.

In case you notice that your car frequently overheats, it’s better not to risk driving any further and putting the pistons or head gasket to risk. Here are some of the other common symptoms of a faulty water pump:

Coolant leaks may simply occur due to pressure in case the liquid burst into a hose as the water pump seized. It can’t get back to the radiator with a faulty pump, so a hose might wear off and the coolant could leak out from the car.

On the other hand, the coolant could leak from the pump itself. The water pump consists of various seals that might crack and release the liquid out of the car. Of course, it can simply be a result of a worn-off cooling system tube or a hose, but it’s still worth inspecting the water pump if this happens.

Sadly, you can’t repair the pump if these noises start appearing. They mean that the pump’s bearings have worn off and you’ll need to replace it with a new pump to enable the coolant to flow again.

Corrosion and rust on the water pump

If you suspect that the increased temperature is a result of a water pump going bad, you can visually inspect the part. If you notice any rust or corrosion on it, it’s a bad sign and you should have the pump replaced immediately.

You can find the water pump in front of the engine and it’s easily recognizable by the drive pulley and the fan. Corrosion forming on the pump can also be caused by contaminated coolant, which could cause damage to the radiator and other components.

To solve this problem, you’ll need to flush the cooling system by replacing the old coolant with new liquid and replace the water pump.

Steam coming from under the hood

The final symptom of a bad water pump is steam coming from under the hood. You might notice it while driving coming from the sides of the hood or the air intake area at the bottom of the windshield. This is a sign you should stop driving immediately and wait until the engine cools down to pop the hood.

The steam is most likely caused by excessive heat in the engine’s compartment, and it’s possibly due to a water pump failure. If it can’t move the coolant through the system, heat will build up in the engine block and steam coming from under the hood is a sign of that.

To prevent the water pump from failing prematurely, you can perform occasional inspections to test its operation. Looking for rust and corrosion during a visual inspection is something you can even do without the help of a mechanic.

It also comes in handy to check the radiator cap pressure and see if the thermostat is working properly. In the worst-case scenario of a coolant leak, your mechanic can use dye to try to track the leak source. It’s also worth checking the water pump’s fan to see if it works properly.

Hopefully, this guide will provide insight into the water pump failure symptoms so you can replace it as soon as you spot any of them. It’s an essential part of the functionality of your car’s cooling system, and frequent overheating can just be the start of your troubles if it goes bad.

Regular inspections of the cooling system and the pump itself can help you preserve it as much as possible, and it could last for nearly 100,000 miles if you do so.

How do I know if the water pump is bad?

You can know if the water pump is bad by the whining noise while driving, frequent engine overheating, and coolant leaks.

What happens when the water pump goes out while driving?

If the water pump goes out while driving, your engine’s temperature might suddenly raise since the coolant no longer circulates the engine block as it should and it could lead to overheating.

How do I know if I have a bad water pump or a head gasket?

You can know if you have a bad water pump or a head gasket by taking a look at the pump and inspecting it for corrosion and rust. Also, a blown head gasket should cause bubbling in the radiator and coolant reservoir.