What does a car radiator do? 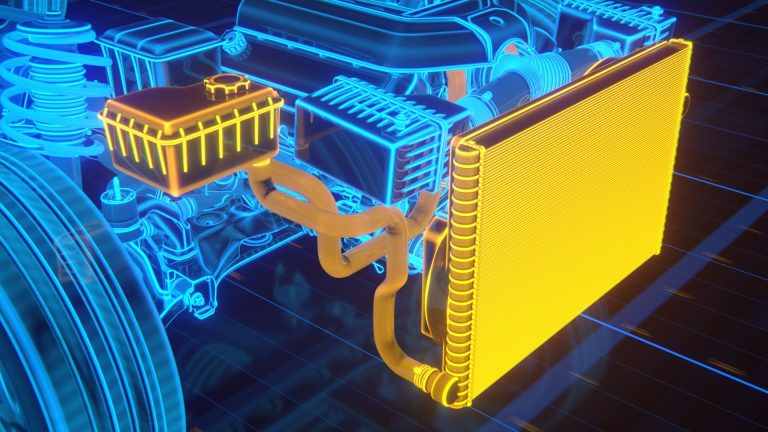 An internal combustion engine generates a vast amount of heat caused by the combustion itself and the friction of the moving engine’s parts. For it to operate smoothly without overheating, the cooling system must effectively remove excess heat from the engine’s compartment.

The radiator is one of the key components of the cooling system, so it’s no wonder that many drivers ask the question – what does a car radiator do? Your car’s radiator cools down hot coolant liquid as it passes through its core and exchanges heat that stays in the aluminum construction of the core. It also moves the coolant through the system, so our team will explain everything you need to know about it.

How does a car radiator work?

To understand what a radiator does and how it does it, it’s important to understand its role in the cooling system. It’s just one of the key components including the water pump, thermostat, cooling liquid, and coolant temperature sensor.

All these parts work as a whole to cool down the engine and remove excess heat from the engine’s compartment. All the components need to stay operational for the radiator to fulfill its purpose of cooling down hot coolant liquid.

If you’ve got a bad water pump, the coolant can’t be pumped into the radiator, and the same goes for the rest of the cooling system parts. Assuming that everything works right, the radiator can do its job being the heat exchanger. It’s a crucial component that lets your engine run properly.

So, the radiator doesn’t only cool down the hot coolant that enters it – it also transfers the heat generated by the engine out of the system and into the atmosphere. Once the radiator cools down the liquid, it transfers it further towards the engine where it enters a safe water jacket without entering cylinders or mixing with the oil.

It all starts with the thermostat which regulates the coolant’s flow into the engine. When the engine is cold, the bypass valve is used so coolant doesn’t flow through the radiator at all, allowing the engine to heat up. As the engine reaches operating temperature, coolant liquid picks up the heat.

At this point, the bypass valve closes, and the thermostat’s main valve lets hot coolant reach the radiator. The coolant temperature sensor triggers the radiator’s fan, which blows over the hot coolant and releases the heat into the atmosphere. At the same time, cold coolant flows from the radiator into the engine and restarts the process.

Key parts of the radiator

Of course, this is just the basics behind how a radiator operates and maintains the temperature of the coolant reaches the engine. The radiator has several key parts, and these include:

It might seem like a complex device at this point, but bear with us – a car’s radiator is quite straightforward. Even if you are not a car guy, it comes in handy to know these parts in case your radiator gets clogged or fails, so you can find the solution.

About the radiator’s core

The radiator core is a crucial component of the radiator as it serves as a device for heat exchange. Of course, the cooling fan also helps in the process as it blows over the coolant and releases heat into the atmosphere.

All that heat goes into the fin and that’s where the cooling fan blows and finishes the heat exchange process. At the same time, now cooled liquid keeps traveling through the core and exits on the other side. The cooled liquid then proceeds to repeat the cooling process and circulates back into the engine to absorb the heat.

The role of radiator hoses

Once the pressure stabilizes, the vacuum retracts the coolant and leads it back into the radiator. The cap also prevents coolant from boiling due to generated heat and ensures that the heat exchange process works properly.

Sings of a failed radiator

If you notice your car is overheating and going back to normal when the engine cools down, you might have a problem with the cooling system. Most notably, problems with a water pump and the radiator are among the common culprits behind an inoperable cooling system.

These are some of the most common symptoms of a bad radiator:

If the radiator fails, your engine will start overheating due to a lack of coolant recirculation. Also, it won’t be able to do its job as a heat exchanger, and it gets dangerous for your engine as soon as it builds up the temperature.

What usually happens if your radiator is bad is that it leaks coolant. It can be a result of the mentioned symptoms, as well as a blown head gasket or a bad water pump. You’ll usually hear the sound of the radiator’s blower in case your engine starts working at a high temperature.

However, if you hear a hissing sound, it might indicate radiator trouble. You should check the radiator cap, the hoses, the tanks, and the core itself for cracks if this happens. It doesn’t have to be an expensive repair as long as you deal with it on time, and the worst thing that could happen is if you need to replace the radiator itself.

If you’ve been asking the question “what does a radiator do” in your car, now you have a detailed answer. It’s a crucial component of the cooling system, so you should make sure it’s checked and working to keep your engine working at an operative temperature.

One of the worst things that could happen is if your coolant starts leaking as it won’t be able to recirculate back to the engine to pick up excess heat. So, make sure that you never risk it by driving your car with a faulty radiator.

Can a car run without a radiator?

Your car can run without a radiator but only as long as your engine starts building up heat. Without a working radiator, your cooling system won’t work right and it can cause engine overheating if the engine runs long enough.

How do you know if you need a radiator?

You can know if you need a new radiator in your car by coolant leaks, hissing sounds, and coolant overflowing from the tank.

How does a radiator affect your car?

The radiator cools down the hot cooling liquid exiting the engine, and it recirculates the coolant by sending cooled liquid into the engine to restart the cooling process.

How does a radiator work for cooling?

A radiator receives hot coolant from the engine through the inlet tank and it draws coolant through its core where the tubes pick up the heat. The radiator’s blower leads the heat away from the car and the cooled liquid goes through the outlet tank and back into the engine via the lower radiator hose.