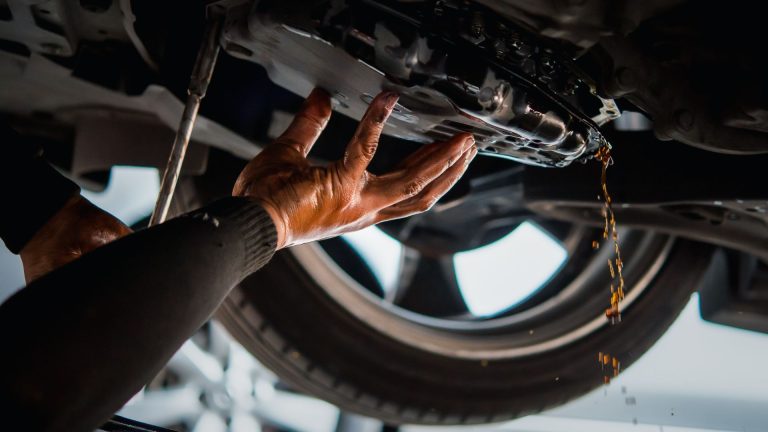 Every driver is destined to face an unsettling situation of finding a leak below the car sooner or later. One of the potentially dangerous leaks is a transmission fluid leak, and it should be addressed as soon as possible to avoid serious consequences.

If you find a paddle pointing towards a transmission fluid leak when parked, we’ll guide you through the possible causes. If you don’t deal with the source of the leak right away, unlubricated transmission gears will malfunction due to constant friction. So, let’s get into the main reasons behind the problem to give you a few pointers on how to prevent this.

The role of transmission fluid

Transmission is one of the key systems in your car and it transfers the power output of your engine onto the wheels. To do so, the system consists of various gears and metal components that could easily wear off due to metal-to-metal friction.

That’s where the transmission fluid kicks in – it ensures that there’s a smooth operation between all those gears and metal parts. Without enough transmission fluid, bearings would easily wear off and the friction would generate heat that could disrupt all the other components within the system.

So, if there’s a leak in the system, it should be dealt with immediately to preserve your transmission. A loss of transmission fluid would also result in poor clutch pedal operation in cars with manual transmission. That only draws further problems and more expensive repairs, so you have to know how to recognize a leak.

There’s a difference in transmission oil color based on the transmission type. If you are driving a manual car, it will be darker and resemble a sort of combination of a dark brown and reddish color. On the other hand, automatic vehicles have pink or red transmission fluid. There’s a reason for these specific color variants – manufacturers made them that way to ensure that you easily recognize this type of leak.

Sometimes coolant liquid or even power steering liquid could be colored the same, so it’s important to pinpoint the source. To check your transmission fluid, make sure to drive your car until the engine heats up and to shift through all the gears if possible. It will make the transmission fluid reading more accurate, and you can test other symptoms as well.

You may hear a humming noise getting louder with speed below the gear stick as you accelerate, or feel unpleasant vibrations during gear shifts. After driving for a while, you can raise the hood and find the transmission fluid reservoir that’s usually close to the transmission on the driver’s side. Pull out the dipstick and use a paper towel to clean it from the liquid.

This will help you get an accurate reading once you get it back in and pull it out from the reservoir. The only thing that remains is to measure the liquid level based on the dipstick measurement writings. If it’s too low, you probably have a transmission fluid leak.

Once you determine that it’s a transmission fluid leak you are dealing with, it’s time to find the source of the leak. The leak could come from one of the following spots in the transmission system:

To check and find the exact source of the leak, you’ll need to drive to a mechanic to jack up the car and search the listed components for a leak. The front main seal is a great deal-breaker, since your mechanic may need to pull out the transmission off the car to fix it. It’s most commonly a problem with the seals, so we’ll dive into the reasons behind your car losing transmission fluid when parked.

The damaged or corroded transmission pan

One of the first things you should inspect in case of transmission fluid loss is the pan gasket. Especially when it comes to automatic cars, this is where the fluid is stored and there’s a tiny seal between the pan and transmission.

Over time, it’s known to degrade, break, or corrode, so a loose seal will cause all of your leakage troubles. The pan can also be damaged if you’ve had a minor accident before you started noticing the fluid leak. Even a small bump can damage the pan, and fluid will start leaking out of it.

Sadly, you can only do as much as diagnose the issue by looking under the car yourself. To fix and replace the pan, you’ll need a help of a mechanic.

Transmission fluid is active in your car’s system as it lubricates all the transmission hard parts. So, it’s possible for the pipes to rust or for a clog to appear just like in clogged fuel injectors in the fuel delivery system.

The pipe system goes over a transmission pan, so it might appear like it’s the pan that’s leaking. That’s why you need an experienced eye to notice the difference, as even replacing the pan won’t do much in this case. The fluid system is often clogged by rust, or it can be damaged due to the rust which causes the pipes to break down.

While transmission seals aren’t expensive to replace, they can be hard to reach and require some serious work. These seals are mounted to prevent transmission fluid leaks, but the rubber can sometimes degrade over the years.

The seal issues also relate to torque converter leaks, since the seal here takes the pressure caused by torque input and acceleration. During gear shifts, the seal will take the pressure generated by the torque output from the transmission system.

The seal itself won’t be much of a problem here, at least when compared to the cost of replacing the converter itself. If the seal breaks down, the pressure can damage torque converter bearings and the part itself will start to degrade. So, noticing the seal leak on time may help you avoid costly repairs.

In case of a transmission fluid leak, the best thing to do is to have a mechanic inspect your transmission system. If you act on time, you should be able to only make small repairs such as seal replacements. While you can’t do much to repair the issue yourself, there are some things you can do to prevent it in the future.

Make sure to check the transmission fluid level regularly, and to prevent forcing more wear and tear on the seals. You can do it by shifting your gears properly since many drivers tend to overlook how fragile a transmission is. If you drive on low revs and suddenly accelerate, the transmission pressure will be far greater than gradually accelerating.

Try to enforce as much linear acceleration as possible as you drive to extend the life cycle of transmission seals and bearings.

If you spot a transmission fluid leak when parked, don’t leave the issue unattended as it can lead to serious damage to your transmission system. You can use the useful tips listed in this guide to figure out the source of the leak and repair it quickly.

Make sure to check your transmission fluid level frequently after fixing the issue, and to responsibly shift through the gears to prevent it from happening again.

How much does it cost to fix a transmission fluid leak?

It could cost from $100 to $1000 to fix a transmission fluid leak based on the consequences it leaves behind. If it’s just a loose seal, you can expect to pay the minimum amount, while replacing a torque converter can be much more expensive.

Can you drive a car with a transmission leak?

You can drive a car with a transmission leak for about 10,000 miles, but if you don’t drive straight to a mechanic, the problem can even lead to faults that require transmission rebuilds.

How serious is a transmission fluid leak?

Transmission fluid leak isn’t that serious on its own when compared to the possible damage it can leave on your transmission system in a long run.

Can you seal a transmission leak?

You can seal a transmission leak by replacing the damaged or loose seal with a new one, assuming that the leak didn’t cause further damage to the torque converter and the pan.