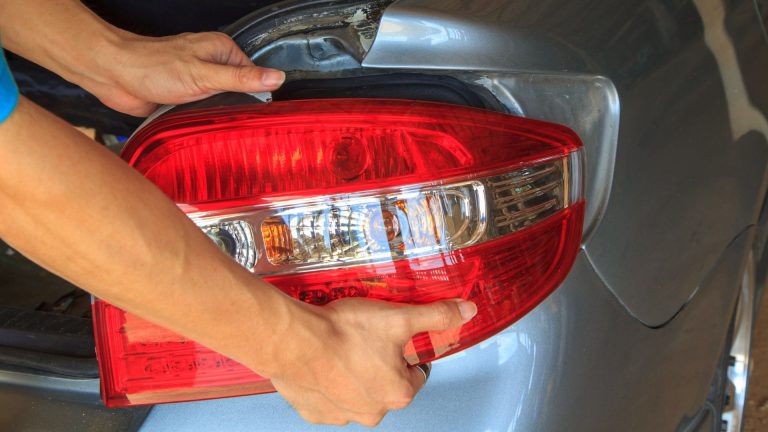 One of the most annoying things that can happen on the road is if one of your light bulbs goes out. In the case of headlights, you’ll spot the visibility difference right away, but sporting an inoperable taillight is much more difficult.

Just like your headlights, taillights add up to making your vehicle visible to other drivers on the road. Still, if you don’t check the taillights on time, you can easily end up driving with the light not working. So, in case of taillights not working, it’s important to spot the issue as soon as possible and fix it to maintain visibility and driving safety.

How do car taillights work?

One of the most common misconceptions is that taillights are the same as your car’s brake lights. This is not true, although both light bulbs are placed within the same unit. Brake lights only turn on as you step on the brake pedal, and they are connected to the braking switch that engages them.

On the other hand, taillights are of the same color, but usually not the same intensity as brake lights. They are always on while you drive, and you turn them on the same way as you do your headlights. It’s because they are connected to the same switch as your headlights.

Taillights work through a relay, and their wirings go through the battery. So, as soon as you turn the headlight knob in the cabin, the taillights will illuminate as well.

On vehicles with automatic lights, it’s enough to unlock your car and start the engine and the lights will automatically turn on. Still, there are numerous reasons why they might not work as they should. Chances are that you won’t notice inoperable taillights yourself as you can’t see them while driving. So, you should replace the bulbs as soon as you notice the problem.

If another driver warns you about your taillights, or you spot that there’s no reflection when parking the car towards a wall, the first thing to do is diagnose the issue. Sometimes replacing the light bulb won’t suffice to fix the problem, or the bulb might die again soon after replacement.

These are some of the main reasons behind inoperable taillights you should consider before dealing with the issue:

If none of the listed reasons seem to be the culprit, you can also check the light bulb socket. It sometimes gets corroded or cuts the electrical current which prevents the light bulb from glowing. If your rear light unit is broken or bruised from a rock hit, moisture could accumulate in the socket area, rendering it useless.

You can have your car electrician check the socket in case everything else checks out. If they measure a low electrical current flow, it could be the reason why your light doesn’t work. Changing the bulb won’t help in this case, so you’ll have to deal with the socket to get your taillights glowing again.

Problems with the light bulb

If your taillight works on one side, and it doesn’t work on the other, it could be due to a bad light bulb. If this happens right after changing the light bulb, you might have picked the wrong replacement bulb for your taillight housing.

Picking the right bulb for your vehicle’s model and taillight housing will likely fix the issue. If, however, both of your light bulbs go out at the same time, you probably have an issue with the housing or the wiring.

You should consult your mechanic to pick the right light bulb for your car. Just like you might wonder about your headlight lumens and output, you can’t just pick any light bulb for taillights.

Another possible reason why your car’s taillights aren’t working is if you have an issue with the control switch. While the switch controls both headlights and taillights, just the cables controlling the taillights might be bad.

So, it leads to inoperable taillights, and in this case, the lights on both sides would stop glowing. It’s easy to replace the control switch if it’s integrated into the dashboard. Things are a bit more complicated with the switch integrated into the wheel, as it might share the connection with the turning signal switch.

Either way, replacing the switch and checking the cables behind the physical knob can save the day and get the rear lights of your car glowing again.

One of the potential easy fixes is if a blown fuse has caused your taillight to stop working. To check it, you can inspect the fuse box in your car’s interior or under the hood. You can refer to the owner’s manual of the car to find the exact location of the fuse box and gently pop the cover.

It might be a bit tough to find the exact taillight fuse, but you can use the test light to scan each fuse to see if it’s grounded properly. Fuses aren’t expensive to replace, so you might even save yourself the trouble and fix other blown fuses while you are at it.

Problems with the wiring

Finally, there comes the wiring trouble and it’s because taillights have numerous electrical connections. They are connected to the battery, as well as the control switch and the relay which helps them receive power as soon as the headlights knob is turned on in your car.

It’s also important to check the grounding and it’s best to rely on the help of a car electrician than to tamper with electrical wiring yourself. If none of the problems listed above caused your taillights to stop working, chances are that bad wiring did.

Ultimately, in case of taillights not working, it’s difficult to spot the issue and find the culprit at first. Once you notice the problem, it’s worth going through all the potential reasons listed in this guide to fix it and making sure you get seen by other drivers behind you.

If there’s a problem with the socket or wiring, you won’t fix the issue by merely replacing the light bulb. That being said, you’ll need to make sure that the connections are grounded and the fuse is working properly to improve the visibility of your car.

What fuse controls the tail lights?

There’s a fuse with a “tail lamp” label marked in the owner’s manual of your car, so that’s the fuse you should look for in the fuse box when checking the reasons why your car’s taillights might not be working.

What would cause tail lights to not work?

Some of the main reasons why your car’s tail lights aren’t working include a faulty socket, incompatible replacement bulbs, a blown fuse, or a faulty control switch.

Why are my tail lights and brake lights not working?

If both your taillights and brake lights aren’t working, you might have bad wiring or electrical connections that might result in a faulty brake switch that operates the brake lights.

How do you diagnose tail light problems?