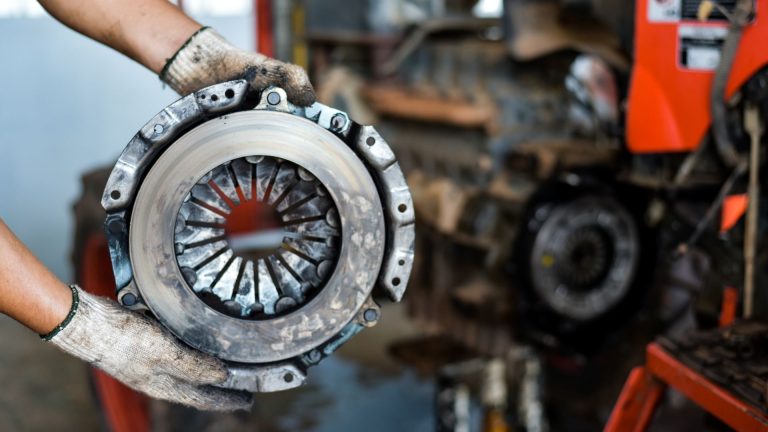 In manual transmission vehicles, the clutch does all the work to make gear shifts smooth for the driver. However, it doesn’t last forever, and when it wears off, you might go through one of the worst driving experiences – clutch slippage.

When this happens, you won’t be able to use the gear shifter regularly and the engine’s power won’t be able to translate to the wheels. So, you must be familiar with clutch slip symptoms, as this guide will present you with. This way, you can hopefully avoid being stranded on the side of the road without being able to move your vehicle.

What is a slipping clutch?

A slipping clutch means that it fails to engage and disengage properly, and it can’t translate the torque to the wheels. It might appear as if the clutch pedal is too light and there’s not enough pressure which results in a loss of power.

In other words, a clutch slip is the first sign of a failing clutch, and it needs to be addressed as soon as possible or you won’t be able to move your car. To understand why clutch slip occurs, you need to understand how the clutch works first.

In manual cars, it’s the bond between the transmission and the engine gears. As you press the clutch, the gears get separated and so no power can be translated to the wheels regardless of how much you rev the car. It makes it easier to shift gears and as you place the shifter in the right gear and release the clutch, the engine and transmission gears get connected again.

The engine’s power output gets translated through the system of the flywheel and clutch disc to connect the engine to the transmission. However, if the clutch pedal is pressed, the gears disengage and stop spinning at the same speed.

Common symptoms of a slipping clutch

In case of a slipping clutch, the mentioned flywheel and clutch disc don’t bond as they should when you release the pedal, so the torque doesn’t get evenly distributed to the wheels. It can swiftly grow into a much bigger problem where the clutch pedal gets completely loose.

To prevent the worst-case scenario from happening, here are some of the main signs of a slipping clutch:

If it takes less time to disengage the clutch than usual, or the pedal’s position is different than you are used to, it’s also a sign of a slipping clutch. You shouldn’t keep driving like this since it might be tough to shift through gears, which is especially dangerous on highways and at higher speeds.

Squeaking or other noises when pressing the clutch

The moment when you hear the noise, you should pay attention to the pedal itself. Usually, the pressure won’t seem right at this moment, and you might hear the same noise again after disengaging the pedal. It’s one of the early signs that are the best indicators you should have the clutch system inspected.

Along with the noise, you might also sense a difference in pedal pressure when pushing the clutch pedal down. If it feels loose or even sticks down for a while before slowly retracting back up, it’s a sign of a bad clutch or clutch slippage.

Also, if the clutch separates the engine and transmission early just as you slightly push the pedal, that can be another sign. Usually, you shouldn’t be able to do this so easily, and that’s why you need to push the pedal down to properly change gears. However, that’s not the case with a slipping clutch.

Burning smell from the clutch

A slipping clutch results in difficult power translation from the engine to the wheels, and it might result in higher revving than what the acceleration shows. So, that could cause engine overheating or even a burning smell coming from the failed clutch that can’t engage and disengage properly.

Difficulties when shifting through gears

Clutch slippage in manual cars can be manifested in a similar way to a slipping transmission in an automatic car. You might have trouble shifting through the gears, and the revs can jump higher than they are supposed to in specific gears.

As the slippage problem gets worse, you’ll have a hard time even putting the shifter in any gear, and this is often accompanied by a spongy and sticking pedal.

As you accelerate and upshift, you might also experience some sudden RPM raises right after using the clutch. Since the torque from the transmission can’t be properly translated to the wheels with a slipping clutch, this is how the problem will manifest itself.

So, you might see your revs jump quite high even though the speed isn’t accordant to the RPM jump. You can drive your car to a mechanic to diagnose the problem if this keeps happening when accelerating.

Hopefully, the clutch slip symptoms listed in this guide can help you diagnose the problem and solve it quickly. It’s a sad thing that many drivers are unfamiliar with clutch slippage, so they mostly look the other way and it can be too late to try and fix the issue later on.

Don’t let your clutch get completely loose and fail, as you might get stranded on the road without the chance to push the shifter into gear.

How do I know if my clutch slip is bad?

You can know your clutch slip is bad in case the clutch pedal gets sticky and spongy, you have a hard time shifting through gears, and you hear strange squeaking noise when pressing the clutch pedal.

What happens when a clutch slips?

When a clutch slips, it won’t engage and disengage properly, preventing the wheels to receive the power and in the worst-case scenario – preventing you from moving the vehicle.