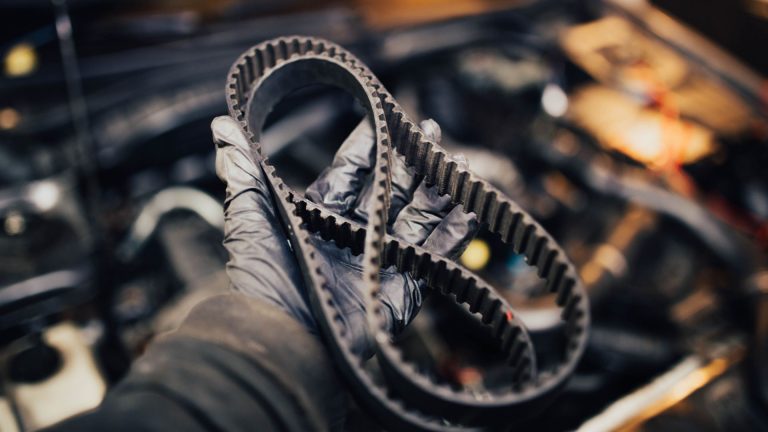 Your car’s timing belt plays an essential role in how the vehicle operates. It is an internal engine component that spontaneously rotates the crankshaft and engine’s camshaft. The timing belt ensures that each cylinder fires at the right time.

Your vehicle’s timing belt is under a timing cover near the front of the engine, and it has to be replaced periodically since it is made from reinforced rubber that keeps your car running. The timing belt links the most crucial halves of your vehicle’s engine, allowing for adequate airflow at the proper time within your engine.

The timing belt functions under immense force, which can cause it to wear out gradually. Because of this, it is recommended to replace your timing belt routinely, following the manufacturer’s guidelines.

Knowing the signs of a broken or failing timing belt is crucial because it will prompt the replacement of the belt before severe damage is done to your car. In this article, we look at some bad timing belt symptoms.

What are the symptoms of a bad timing belt?

When the timing belt begins to wear out, you may hear a ticking sound inside the engine. This sign may indicate the engine not having the proper amount of lubrication or low oil pressure.

Timing belts are commonly found in SUVs and cars with smaller engines. These smaller engines are called displacement engines, and the larger ones with larger bores use a timing chain. As the timing belt begins to wear out or get damaged, there are a few symptoms that you should be aware of.

Knowing the signs can help to avoid costly repairs. Your timing belt should be replaced by a professional mechanic to ensure it is reinstated correctly and to inspect the engine components for internal damage. The following are symptoms of a bad timing belt.

Improper idling of the engine

If you release the accelerator of your car, and the engine does not halt immediately or keeps running at low speed, your car is “idling.” When the engine is idling, the timing belt transfers the motion of the crankshaft to the valves, maintaining consistently slow movement of the camshaft.

When timing belts start to wear, they begin to slip between the driving gear, causing a slight mismatch. This often results in a non-uniform exhaust sound from the vehicle when idling. If the timing belts slip further, the engine will not maintain the idling process and will shut down after a certain period.

Ticking noise coming from the engine

A ticking sound from your engine could indicate severe damage to your timing belt. The timing belt is attached by several pulleys that move to the camshaft and crankshaft.

The expelled gases leave through the exhaust manifold. If your vehicle’s timing belt starts to get worn out, it may create a ticking noise inside the engine and indicate low oil pressure or other lubricants.

A worn-out engine will affect your engine’s fire rate. If the timing belt slips off the camshaft drive, it will cause the cylinder to open and close faster than it should.

You will hear a loud popping sound when the engine misfires or ‘backfires.’ This firing occurs when unburned fuel is removed from the cylinder on the exhaust stroke.

When you notice that your vehicle is misfiring, your belt is worn out, and you will need a replacement. It would be best if you took it to a mechanic for a proper inspection and service. If you fail to get the timing belt replaced, it can cause significant damage to the combustion chamber and other components like pistons, piston rings, and valves.

Unusual smoke coming out from the exhaust

If an oddly high amount of smoke comes from your exhaust pipe or the engine, it indicates a severe problem. This smoke usually means a bad timing belt, but it usually indicates a critical issue with the overall functioning of the engine. If a bad timing belt causes unusual smoke, you will most likely notice a strong smell of fuel that indicates inadequate combustion.

Worn-out belts cause a darker color of smoke. It skips the inlet valve’s closing time, letting too much air and fuel mixture into the combustion chamber. The fuel combustion will get louder, and the residue gasses will get denser if there is much fuel inside the chamber.

The engine has a specific pressure level that should always be maintained for optimal performance. The pressure level will change if the timing belt is performing inadequately. An irregular valve timing can cause improper combustion levels on the inside, which causes wear and tear of the internal parts.

There is an inbuilt sensor in most vehicles that alerts you when the oil pressure level reduces. Noticing a low engine oil pressure indicates severe issues with the timing belt.

Your vehicle’s timing belt can cause the wear of the piston and other critical components of the engine. A broken piston indicates severe damage to the timing belt. In most cases, it causes irreversible damage to the valves or piston, requiring replacement.

If this issue continues, the timing belt might get damaged completely. This will cause the crankshaft to operate entirely out of synchronization, and the valves will wear out.

Oil leak near the engine

If you notice an accumulation of oil around your engine, your car may be experiencing a leak resulting from the wear of a timing belt. A series of bolts and nuts fasten the timing belt covers; in several cases, they can get loose over time.

Oil leakage can also happen when the gasket between the timing belt cover and engine block gets cracked or worn out. This causes your engine to overheat and results in expensive repairs.

When your RPMs (revolutions per minute) start to malfunction, it could result from a faulty timing belt. If your timing belt gets completely snapped or has missing teeth, it can have an adverse effect on your vehicle’s RPM meter.

The timing belt is an essential part of a vehicle that connects the crankshaft and camshaft in your engine, and it can wear out if used over an extended period. Some of the symptoms of a bad timing belt include engine misfires, ticking sound from the engine, malfunctioning revs, and so on.

If you have a damaged timing belt, you should take your vehicle to a professional mechanic. There could be significant damage to your car if the replacement isn’t performed adequately and when you fail to repair the worn-out timing belt.

What issues can a bad timing belt cause?

Can you drive with a bad timing belt?

If the timing belt is on the brink of failure, you might only go for a few minutes, but if the belt is wholly damaged or snaps, you will no longer operate the vehicle, and your car will need to be towed to an auto repair shop.

A worn timing belt sounds like a clicking or ticking noise from the engine. If the damaged belt is left unattended, the noise becomes more audible.

Can a timing belt fail without warning?

A timing belt can fail without warning. This is why manufacturers advise replacing them at regular intervals, usually 60,000 to 100,000 miles. A broken timing belt can ruin your engine if disregarded and leave you stranded on the highway.