What to do after replacing the mass air flow sensor 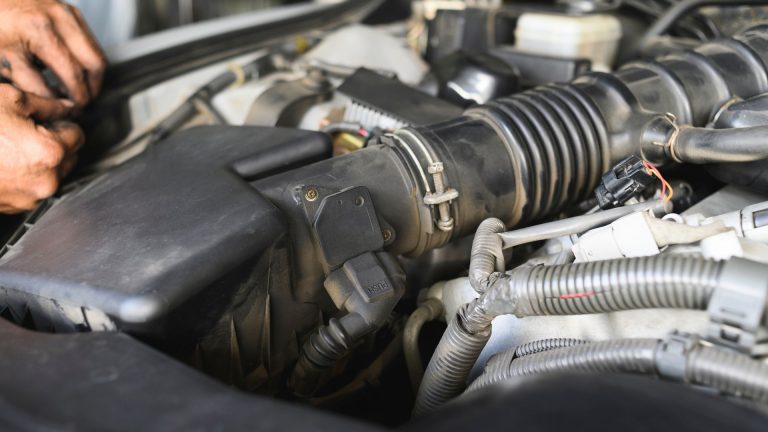 Your car’s engine needs a mixture of air and fuel to function properly, and various systems allow precise combustion. Among them, the faulty mass air flow (MAF) sensor can be the source of trouble if it sends inaccurate readings to the computer.

So, if you get a new one, there’s one big question – what to do after replacing the mass air flow sensor? You should let the car run idle or disconnect the battery to reset the system after replacing the mass air flow sensor. We’ll lead you through the role of this sensor in your car and how you can reset the readings it sends to the engine computer.

What’s the mass air flow sensor and what does it do?

As the name of this part suggests, the mass air flow sensor measures the air mass and sends readings to the engine control unit (ECU) of your car. By doing so, it sends the readings to a computer allowing a specified amount of air that passes from the intake into combustion chambers.

The mass air flow sensor therefore directly aids in proper combustion, ensuring smooth operation of your engine. By using the data sent by the MAF sensor, your engine’s computer determines the amount of fuel that needs to be injected.

So, you could say that the mass air flow sensor subsequently aids in the amount of fuel that the injectors spray into the cylinder as well. In case the sensor malfunctions, the amount of fuel and air won’t be precisely measured to trigger the combustion.

The sensor can be found on the engine’s intake, so replacing it isn’t the biggest problem. It’s what needs to be done after replacing the sensor, to make your engine’s computer use accurate readings again.

As mentioned, the mass air flow sensor sends data to the engine’s computer, and if it gets dirty it will start sending inaccurate readings. In this case, the amount of fuel and air needed for your engine’s performance or even to start the engine won’t be mixed properly.

The result could make your car hesitate to start, and the engine could even stall soon after you manage to start it. Driving with a faulty MAF sensor will generate frequent engine “hiccups” and acceleration clogs, so it’s not safe to drive at a higher speed with a faulty sensor.

On top of that, you’ll quickly notice a “check engine” light glowing on the dashboard due to an improper mixture of air and fuel. As a result, some fuel will be left in the cylinders, which can lead to other problems. At this point, your car’s computer will restart to the default map, so you’ll be able to drive home.

However, this mode is referred to by mechanics as the “limp home mode”, and you shouldn’t drive yourself with this map. Eventually, oxygen sensors will fail as well, and the catalytic converter will get damaged. The more you postpone the replacement, the worse your troubles will be. MAF sensors can also be cleaned, but resetting the computer readings afterward is still crucial.

If you sense any of the listed consequences still happening even after replacing or cleaning your MAF sensor, it’s because you need to restart the readings. It’s a common issue – the car’s engine computer will keep running on a map based on the inaccurate parameters provided by the faulty sensor.

It takes some time for the computer to recalibrate itself, so it could be days until you start noticing the difference. To make your computer receive accurate readings from a new sensor faster, here are some things you can do:

This will allow your engine computer to receive new and precise readings from the new MAF sensor, so the engine will function with a precise mixture of air and fuel again.

One of the clear signs that your car’s mass air flow sensor isn’t working properly is if you notice rough idling. On the other hand, one way to reset the readings is to start the car after replacing the sensor, and letting it run idle.

By keeping your foot off the gas pedal, you’ll let the engine relearn the air and fuel patterns through an even operation. To do that, you should at least let your car run idle for 30 minutes to an hour. After the period passes, shut off your engine and wait a few minutes before you start it again.

You can also disconnect the negative terminal of your car’s battery and plug it in again after 10 or 15 minutes. This will allow the ECU to restart once the battery starts working again, and all the error codes should be removed.

With the codes, the faulty readings and MAF sensor measurements should also go away, and the computer should pick up new measurements. To make this method more effective, you can also leave the car running idle even after disconnecting the battery.

You can also reset the ECU without disconnecting your battery, and it’s sometimes a useful tip when resetting the MAF sensor readings. To do so, you need to find the fuse box of your car under the hood. You’ll see the ECU fuse designation which helps locate it.

The next step is to simply pull it out and plug the fuse back in, which will restart the ECU readings. You can use a scanner tool to check for any error codes to see if the restart was successful.

Cleaning the sensor can also help

Although it’s advisable to change your mass air flow sensor if it starts sending inaccurate readings to the engine computer, sometimes cleaning it will also do the job. You can use a specific MAF sensor cleaner that evaporates and leaves no residue once you place the sensor back.

You should just wait an hour or two until the sensor gets completely dry before placing it back. You should still restart the ECU after cleaning the sensor.

So, if you’ve been asking the question of “what to do after replacing the mass air flow sensor”, now you have an answer. Make sure to disconnect the battery to restart the ECU readings, and to leave your engine idling to restore the accurate reading.

You can also restart the ECU from the fuse box, and going for a short test drive afterward will tell you if your sensor is operating as it should after replacement.

Should you clean a new mass air flow sensor?

You shouldn’t clean a new mass air flow sensor, since replacing the faulty one with the new sensor should already reset the air flow measurements.

Does a new map sensor need to be programmed?

A new map sensor needs to be programmed or calibrated into the ECU after replacement. You can do it by resetting the ECU and the readings will be accurate again.

Is It Necessary to Reset the ECU After Replacing the MAF Sensor?

Yes, it’s necessary to reset the ECU after replacing the MAF sensor, and you can do it by disconnecting the negative battery terminal.

How long does it take for the mass air flow sensor to reset?

It takes a couple of days for the mass air flow sensor to reset on its own, so you should leave the car idling and disconnect the battery to speed things up.

Can I drive with the MAF sensor unplugged?

You can drive with the MAF sensor unplugged, but the engine will work on the “limp mode map” and it can damage the engine and increase fuel consumption until the new sensor comes in.