Water coming out of the exhaust 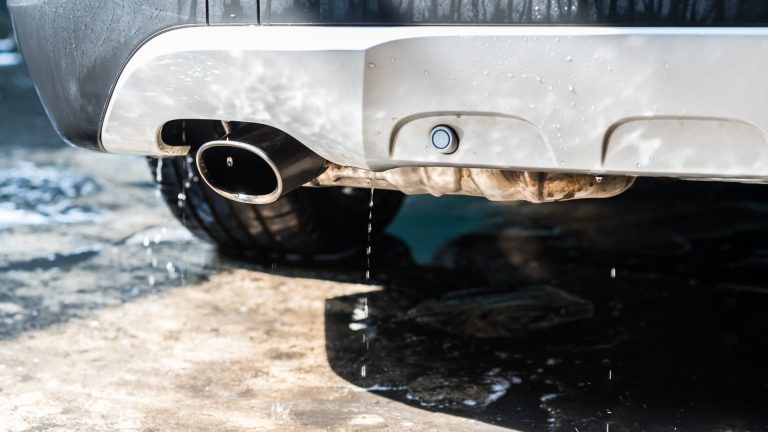 Throughout the lifetime of your car, you’ll inevitably experience residue from your exhaust. Whether it’s smoke or fuel, it points out to be a mechanical problem, but what if you spot water coming out of the exhaust? Well, things get a bit more complicated here, since water from your exhaust could be a perfectly normal thing.

However, it sometimes points out serious problems with the engine, and that’s why this issue deserves taking a closer look. Our team set out to explore the nature of this occurrence, and give you all the pointers and possible causes behind the problem to help you get a timely reaction.

Water from the exhaust as a result of condensation

Before we get into potential troubles that lead to water coming out of the exhaust, it’s time to deal with the most natural occurrence – condensation after internal combustion. Water forming is a natural byproduct of fuel combustion, which consists of carbon and hydrogen.

That’s also a reason why you might spot water dripping from your exhaust pipe when parked. The engine cools down, and the vapor turns into water drops dripping from the pipe. The best thing you can do to make sure it’s just a byproduct of engine combustion is to check if it’s water or gas.

If it’s just water, you can mostly write off any serious problems if it’s just a result of condensation. On the other hand, gas exiting the tailpipe might indicate a rich fuel condition in the chambers, bad fuel injectors, and other mechanical issues.

Main reasons behind water dripping out of the exhaust

Well, now you know that water exiting your exhaust pipe might simply be a consequence of condensation. However, it sometimes indicates a more serious mechanical fault, and that’s why you shouldn’t leave the matter unattended.

To be able to act on time, you first need to know what could go wrong and make water leave the exhaust pipe. So, here are the main reasons behind water coming from the exhaust of your car besides condensation:

In most cases, if there’s a mechanical failure that causes water to leak from the exhaust, it won’t just be a drop or two. That could be the first sign since water dripping as a result of condensation mostly appears in form of a few drops dripping.

During a regular part of the catalytic converter operation, some water vapor might get released as a result of clearing out the gasses. That vapor then turns into water and exits the tailpipe in form of water droplets.

While water coming out of the exhaust as a result of condensation or catalytic converter operation isn’t a bad thing, sometimes it’s a bad sign. One of the most serious causes behind water dripping from the exhaust is engine piston damage.

It’s usually followed by smoke coming from the exhaust as well, as a burning smell in the car. In case of damaged pistons and piston rings, you might also notice blue smoke from the exhaust. Your dashboard might also indicate an engine fault via the “check engine” warning, and you should take this problem seriously.

Damaged pistons can cause improper combustion that reflects through water exiting through the tailpipe as one of the signs. You shouldn’t drive your car any longer at this point, since it can lead to a complete engine rebuild and a repair that goes in the range of $1000 to $5000.

However, if the rings are damaged, chances are that oil will get through your tailpipe instead of water. Moreover, damaged pistons on their own won’t trigger water dripping from the exhaust pipe unless a head gasket is damaged as well. That leads us to the next potential cause on our list, but a blown gasket combined with damaged pistons is a worst-case scenario if you see water leaking through the pipe.

Whether your pistons have suffered damage or not, a blown head gasket is the main mechanical fault behind water leaking from the exhaust. You should have your mechanic inspect the pistons either way since the two can sometimes go hand-in-hand.

A head gasket seals the engine’s combustion chambers and prevents oil and coolant leaks outside the sealed area. Along with water dripping from the exhaust, you might also notice white smoke from the pipe. A blown gasket makes the engine’s performance more difficult and overheating much more common, and ultimately leads to serious engine damage.

So, if you ever spot white smoke on the exhaust along with water dripping, tow your car to the mechanic to inspect your head gasket.

Engine’s heat resulting in water from the exhaust

Especially if you live in a generally colder area, you might experience water leaking from the exhaust pipe. It’s due to the high heat generated by the engine to maintain operative temperature and cold air from the outside.

The combination results in increased condensation and vapor turning into water droplets. In this case, there’s nothing to worry about as this problem doesn’t pose a threat to your engine or other mechanical parts. Overall, you can conclude whether it’s just a matter of condensation by observing the exhaust while the engine is running.

If the water isn’t followed by excessive smoke from the exhaust or gas smell, it’s most likely nothing to worry about.

If you spot water coming out of the exhaust or another driver warns you about this issue, it’s crucial to stay calm. In most cases, you won’t even have to do any sort of repairs, since excess gas exiting through the pipe or smoke are far worse problems.

The only possible scenario where something could go wrong is if the head gasket was blown, or if the pistons are damaged on top of that. Still, it’s easy to differentiate between just water and a blown gasket resulting in water and excessive white smoke. You can have your mechanic check the situation just to be sure.

Is it normal for some water to come out of the exhaust?

Yes, it’s perfectly normal for some water to come out of the exhaust as a matter of condensation or a difference in the engine’s operating temperature and cold weather outside. Still, if there’s excessive water coming out of the exhaust followed by a burning smell in the cabin and excessive smoke, you should inspect your head gasket and pistons.

What liquid leaks out of the exhaust?

Water is most likely leaking out of your exhaust, but it’s sometimes possible for unburnt gas to exit through the exhaust pipe in case of fuel injector damage or a rich condition in the chambers.