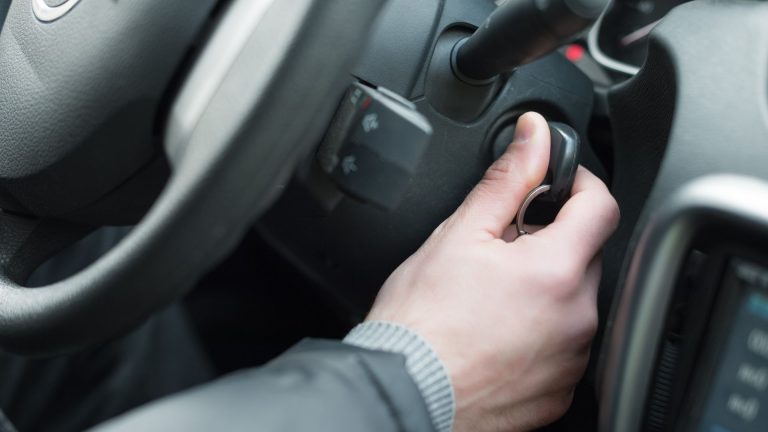 Over the years, vehicle starting mechanisms have evolved so much that you don’t need to put the key in the lock to start your engine. It’s enough to have one in your pocket as you enter the car and press the “engine start” button.

Still, many drivers prefer the old-school type of cars, and having a key stuck in the ignition in this case only draws trouble. Don’t panic if this happens to you – this guide will shed some light on the cause of this problem, and how you can overcome it. The most important thing is to figure out how to remove the key from the ignition, so you can lock your car and fix the issue.

About the safety locking mechanism

The first thing you can do in case your key gets stuck in the ignition is to check if it’s due to your car’s safety locking mechanism. You might have never experienced this before, so that could surprisingly prevent you from taking your key out from the ignition lock.

One way to recognize the issue is to try to turn your steering wheel to the side, and if it’s locked in place, you are dealing with this issue. Namely, it usually happens just as you shut your engine down. As you are preparing to leave your car, you might accidentally hit the steering wheel with your knee.

Also, any sudden movements that you make that result in a steering wheel being pushed aggressively might lock it. If this happens. you’ll notice how you can’t move the steering wheel, and your key will likely be stuck in the ignition. To deal with it, try to gently move your steering wheel from left to right while moving your key towards the “On” position simultaneously.

This should trigger a release from the locking mechanism, and you should be able to move your steering wheel again and take the key out of the ignition.

Reasons behind a key stuck in the ignition lock

If it’s not the safety locking mechanism you are dealing with, several other reasons could cause your key to be stuck. These are mostly mechanical faults or even electrical issues, so here’s a complete list:

Trying to get the key out before placing it in the “lock” position can damage the pins in the ignition cylinder, causing much bigger trouble. So, before you start thinking about mechanical repairs, make sure that your key is in the right position first.

The ignition switch is located beyond the key lock, and it serves an important role in starting your car. It won’t cause the key to be completely stuck, but you might have struggled to turn it into the “on” position. A damaged ignition switch can cause further problems which could eventually result in a key stuck in the ignition.

In this scenario, you can only cause further damage and get your key stuck if you keep trying to start the car. Issues with the ignition switch fuse can also lead to your key being stuck in the ignition. The switch sends a signal to the transmission once your engine is running. This signal is received and it reflects the shift interlock that allows you to shift gears from “park” to “drive”.

So, if there’s a blown fuse or electrical wiring issue concerning the switch, the signal won’t be received properly. The transmission won’t be able to recognize the gear even if you push the shifter into “park”, and you can only take the key out in this mode.

Don’t forget to push the shifter into the park

If you are driving an automatic car, you’ll need to ensure that the shifter is in the “park” position. You won’t be able to take the key out of the ignition while in “drive” even if you are holding your foot on the brake pedal.

It’s especially relevant for those that recently shifted from driving manual transmission cars into automatic cars. You can shut the engine down and even have your gear shifter in the first or second gear while taking the key out with manual cars. It’s even sometimes recommended to do so if you are parking your car on uneven terrain, especially if your hand brake isn’t working properly.

Still, you need to make sure that the shifter is in “park” mode for automatic cars to be able to pull the key out.

In case of a dead battery or a battery discharge, the ignition system might stall, and having your key in the ignition at this moment can cause it to be stuck. One of the things you can do to deal with the issue is to have a friend with a healthy car battery come to jumpstart your battery.

Once electricity reaches the ignition system again, you should be able to release your key from the lock. Have in mind that in this case, chances are that the lock mechanism might lock your steering wheel and key in position, so you’ll have to unlock them as mentioned above.

Your car’s ignition cylinder is a sensitive component located just behind the lock. It consists of numerous pins and springs that are identical to the shape of your key. That’s why you can only start your engine with a key that specifically matches the outline of the cylinder springs.

However, if you tend to push the key in and between positions swiftly, you might damage a pin, or the spring can get out of its position. Not only will you not be able to start your car because of it, but you won’t be able to pull out the key from the ignition.

What to do if your key gets stuck in the ignition?

If your key is stuck in the ignition, the most important thing is to stay calm. If you panic and try to force the key out, you might end up with a broken key in the ignition, which is far worse than a stuck key. So, drivers of automatic transmission vehicles can try gently shaking the gear shifter while in “park”.

As we mentioned, sometimes the sensors and ignition switch signals won’t be received properly, so the sensor might not detect you are in a “park” gear. The other possible thing you could try is gently moving the key up and down and trying to remove it as it reaches the lowest point.

You can only take your key out if it’s in the “lock” position, so this may help remove it. Finally, you can call the local car locksmith to diagnose the issue and remove your key so you can at least lock the car.

The problem of having your car key stuck in the ignition is one of the most confusing situations you can find yourself in as a driver. As it’s usually caused by a damaged ignition cylinder, you should always delicately handle your car key.

By doing so, you can minimize the chance of ever having to deal with a loose spring or cylinder pin. We hope that you’ll be able to find a solution for the problem if it happens to you by going through this guide. In the end, try contacting a car locksmith if you’ve tried everything else and the key still stays inside.