How long does a car starter last — lifetime and signs 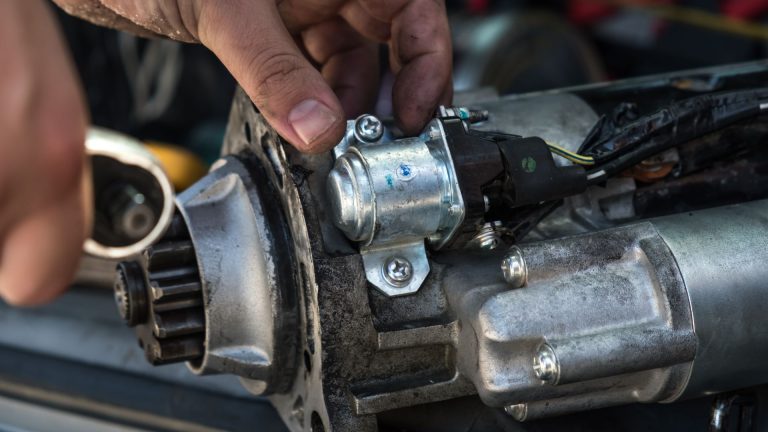 Over the years, drivers have always blamed batteries if their vehicles fail to start. The concept of a car starter solenoid and motor is somewhat overlooked, so it’s no wonder that these aren’t changed so frequently.

Still, if your engine struggles to start, you’ll be asking the following question before you know it – how long does a car starter last? A car starter lasts anywhere from 100,000 miles to 150,000 miles, while it can sometimes even last throughout the car’s life cycle. However, the starter could also fail before you hit 100,000 miles, so we’ll cover the basics of its longevity and signs of a bad starter.

As the name suggests, the starter motor is crucial for cranking your engine, and if it goes bad – your car won’t start. It’s an electric motor and a component of your car’s electrical system, so it needs a powerful boost from the battery to start.

Once you place your key in the lock and turn it to the starting position, the ignition switch sends a signal to the computer. The battery then powers the starter solenoid, which is an electromagnet on the upper part of the starter.

Once the solenoid receives an electric charge, its moving core powers the contactor switch, and it then triggers the rotator. This is an important function since it requires a lot of electrical power, and the moving core moves back into the solenoid once the car has started.

It does so to prevent electrical damage to the car’s systems and battery drainage. Precisely, the solenoid and its core present the bond between the starter and the battery. Why is this important, you may ask? Well, the solenoid requires much less charge to power than the direct powering of the rotator by the battery.

Still, that’s not the only purpose of the starter solenoid – it also moves the pinion and engages the flywheel. The flywheel is moved by the pinion with combined torque from the pinion and the rotator we mentioned before. All that torque gets the engine spinning, and as you let go of the key, the ignition switch cuts the power, forcing the solenoid to retract the pinion and stop spinning the rotator.

Reasons behind the dying starter

As you can see, the starter is a complex motor and it requires a powerful charge to work. Now that you know how its solenoid works, you can understand why it’s so fragile and under constant pressure. The solenoid might go off due to frequent ignition switch action.

For instance, if you drive around the city to run errands and start the car frequently in a short period, it could damage the solenoid. The worst thing you can do is gain a habit of holding the key for too long while cranking the engine.

The solenoid won’t retract its pinion until you let go of the key in the “start” position, so the switching function can be damaged. Another common reason for a dying starter is a draining battery. Even though the current goes through the solenoid, it still requires a powerful charge to work.

So, if you notice a battery discharge warning glowing on the dashboard, it might also cause your starter to fail. In general, starters should last for around 50,000 to 80,000 starts which is a lot. It means you stand a fair chance of never having to replace it with a new one unless a circuit short appears or the solenoid dies.

If your starter dies, you can also just check the fuse box, since a blown fuse and other electrical issues are known to damage the starter.

Signs of a bad starter

It’s often confusing to set a dying starter from battery issues apart. If you can’t start your car, it could be due to a damaged starter motor instead of a dead battery. Here are some of the main signs that your starter has died:

The most obvious sign of a bad starter is if your car won’t start but the lights come on. Think of it this way – if the engine was dead, you would at least hear some cranking noises. On the other hand, as your battery dies, all the electrical features die too.

So, there are no lights, radio, or even pulling the windows down. If all of these features work, but you can’t start your car, it’s certainly due to a bad starter.

Regularly, you would expect to see some engine action as you try starting your car. But, if the starter has gone bad, the only thing you’ll hear is a signature ticking sound. It almost sounds as if someone is trying to click the light switch that isn’t working.

It’s a clear sign of a bad starter, and it appears in the complete silence of the engine. If you hear the ticking and the electrical features work regularly, it’s not a battery issue but a dead starter.

Remember, the car’s starter is an electric motor, so it’s no wonder it sometimes produces smoke that smells like burnt cables. This often occurs if you hear the ticking and experience the other signs, but persist in trying to start the car.

Your starter won’t work due to electric issues or a bad solenoid, so it will try starting in vain. Once it overheats, the smell and smoke will be released into the cabin.

Checking and fixing the starter issue

There are several ways you can inspect a bad starter yourself without visiting a mechanic. The scenario includes recognizing the signs before your starter dies. This is the best solution since you won’t have to deal with the struggle of cranking the engine.

If your starter is going bad, you’ll notice that the engine takes much longer to start. However, the windows, radio, and lights all work like there’s no power loss. In this case, you can expect you have a few more starts left, so don’t shut the engine off and drive to a mechanic to inspect and replace it.

On the other hand, if your starter dies when you are parked, you can physically tap it with a small hammer or a stone. The starter is located on the driver’s side between the engine and the transmission. By giving it a tap, you’ll be able to override it and start your car to avoid towing it.

So, there you have it – our team brought you all the relevant pieces of info regarding starters and their expected life span. If you’ve been wondering “how long does a car starter last”, now you know the answer and problems that might cause it to die prematurely.

Use the listed symptoms of a bad starter to avoid being left on the road without the chance to crank your engine.

How often does a car starter need to be replaced?

A car’s starter needs to be replaced within the range of 100,000 miles to 150,000 miles, but it sometimes even lasts as much as the car itself. It depends on your engine cranking habits and the electrical system of the car.

How much does it cost to replace a starter?

It costs anywhere from $60 to $400 to replace a car starter, depending on the car’s make and model. It also depends on whether you need to replace a solenoid or rebuild the entire starter motor.