How fast can a Lamborghini go? 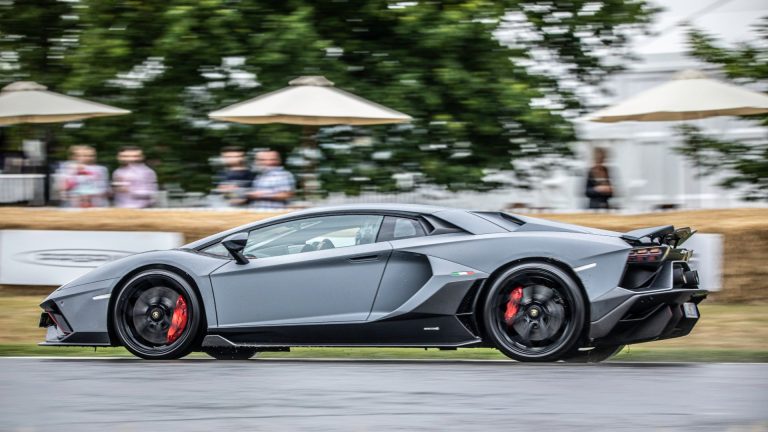 There are very few automobile manufacturers that can rival Lamborghini’s devotion to speed. Lamborghinis are designed for speed, as each component is carefully chosen for maximum and high-speed performance. Every Lamborghini model is handmade and is given absolute attention regarding aerodynamics, design, and powerful engine.

The design choice to make the Lamborghini look more exotic than a regular car attributes to its ability to run fast. The shape of the Lamborghini improves air resistance, thereby hindering an external wind source which can affect its speed.

One notable fact about the Lamborghini is that it is designed to stick to the ground regardless of how fast it goes. In this article, we will give insights into the question of ‘how fast can a Lamborghini go?”.

How fast does a Lamborghini go?

The Lamborghini is incredibly lightweight, contributing to the car’s incredible speed. Some vehicles with similar weights are unsafe to drive at high speeds as they are prone to toppling over since they are not well crafted. Every nook and cranny of the Lamborghini is designed with stability and speed in mind.

The aerodynamic elements of the Lamborghini get integrated from the front of the vehicle to the rear, as well as in how the body gets formed. Lamborghini manufacturers take inspiration from rockets and planes as their inherent aerodynamic design to create their vehicles.

One of the fastest Lamborghini models is the Lamborghini Aventador which can speed up from 0-62 mph in 2.9 seconds, and its maximum speed is 217 mph. The Aventador can deliver such massive speed due to its V12 engine with a 12-cylinder transmission that lets it shift faster than any other vehicle while giving it an unequaled reaction time.

This powerful Aventador engine can shift in as fast as 25 seconds. While the Lamborghini engine is incredibly potent, it is small and weighs under 500 pounds. With the complex science behind the engine, the Lamborghini boasts an incredible horsepower of around 700.

The fastest Lamborghini of all time

The Lamborghini Sian FKP 37 is a hybrid sports car. It has a different engine and electric motors. This sports car was first unveiled in 2019. It has a unique design with a luxury, high-end interior.

This car has a 6.5 L V-12 engine and 25 kW electric motor that lets the vehicle obtain 807 horsepower and a top speed of 217 mph that is electrically limited for road safety. The Lamborghini Sian FKP 37 can go from 0-100 mph within 3 seconds. It is a limited edition vehicle as only 63 units were produced, each priced up to $2 million.

The Lamborghini Centenario was unveiled at the Geneva car show in 2016; it has been turning the heads of onlookers. It has the most stylish and luxurious interior and exterior. It has a V12 engine that generates 789 horsepower. The engine’s speed limiter is 8,600 RPM, but the torque is undisclosed.

The Centenario can sprint from 0-62 mph in 2.8 seconds with a top speed of over 217 mph. It is a limited edition sports car, and each unit gets sold at $3.7 million.

The Aventador SVJ Roadster is a limited edition vehicle with only 800 units. It is widely known for its stylish exterior look and ultra-luxurious interior. It is equipped with a 6.5 L V12 engine with a multipoint injection.

This engine produces 770 horsepower and 631 pound-feet of torque. The Lamborghini Aventador SVJ Roadster has a top speed of 217 mph and can accelerate from 0-62 mph in 2.8 seconds. Each unit of this sports car costs up to $573,966.

The Lamborghini Aventador LP 700-4 has an impressive aerodynamic exterior and sleek interior. It is a very lightweight vehicle created with carbon fiber monocoques. It has a fitted V-12 high-performance engine that can produce 690 horsepower and helps the car reach a top speed of 217 mph.

This high-performance engine allows the Aventador LP 700-4 to accelerate from 0-62ph in 2.9 seconds. This sports car comes with a seven-speed transmission manual and costs up to $399,500.

The Huracan Performante Spyder is designed for ultra speed and high performance. This Lamborghini has an aerodynamic exterior and a multicolor design in the interior. The manufacturers can customize it according to the customer’s choice.

The Lamborghini Huracan Performante Spyder has a high-performance 5.2L V-10 engine. This engine produces up to 630 horsepower and 443 pound-feet of torque. The engine combines with the aerodynamic body to let the car reach up to 201 mph.

The Huracan Performante Spyder accelerates from 0-62 mph in just 3.1 seconds and has a seven-speed transmission with multiple driving options. The cost of this Lamborghini goes for as high as $308,850 for each unit.

The Urus is one of the most popular Lamborghini in the world. Its iconic aerodynamic design and high-speed performance contribute significantly to its fame. It has a luxurious interior equipped with modern high-tech specs that makes it a great car.

It has a four-wheel drive system, and dynamic torque vectoring that spins each wheel as efficiently as possible. The Lamborghini Urus has a 4.0 L twin-turbo V8 engine that produces up to 650 horsepower.

This powerful engine aids the car to accelerate from 0-62 mph in 3.6 seconds with a top speed of 190 mph and 627 pound-feet of torque, making it the fastest mass-produced SUV in the automobile market. This car costs up to $207,326 per unit.

Most Lamborghinis are capable of speed rating above their declared top speed. Although, they are electronically limited for safety reasons. This is because the tire technology does not match the speeds that the car can achieve.

Some other Lamborghini models can deliver maximum speed and incredible performance. Some of these include;

The Lamborghini Diablo has a top speed of 202 mph and accelerates from 0-62 mph in 4.5 seconds. This supercar gets powered by a 6.0 L V12 engine that delivers 575 horsepower and 640 pound-feet of torque.

The Diablo is the first Lamborghini production to obtain a top speed of 200 mph. Its wheel drive and the engine are mid-mounted to achieve weight balance. It has standard features like a fully adjustable steering wheel and seats, electric windows, and power steering.

The Lamborghini Miura was made between 1969-1982. It is a Bertone-design car that relies on its powerful 4.0 L V-12 engine that delivers 385 horsepower and 295 pound-feet of torque.

The Lamborghini Reventon is a mid-engine limited edition sports car that debuted at the 2009 Frankfurt Motor show. It has a stylish exterior that features an all-new carbon fiber and its interior consists of three TFT liquid crystal displays with two display modes. It has a V12 engine that delivers 642 horsepower at 8000 RPM and 489 pound-feet of torque at 6000 rpm.

Lamborghinis are known to be part of the fastest cars in the world. The manufacturer’s dedication to speed is pretty impressive.

Lamborghinis have top-notch interior and exterior features that give an eye-catching effect. Its speed, unmatched aerodynamics, and lightweight frame make it an ideal sports car brand for many users.

Is Ferrari faster than Lambo?

The fastest Ferrari is the street-legal SF90 Stradale, which has a top speed of 211 mph, while the quickest Lambo is the Lamborghini Veneno, which has a maximum speed of 221 mph.

How fast does a Lamborghini go from 0 to 60?

The fastest a Lamborghini can go from 0-60 mph is in 2.8 seconds, which is evident in the Lamborghini Huracan.

What is the fastest Lamborghini?

The Lamborghini Veneno is the fastest Lamborghini manufactured. It delivers a maximum speed of 221 mph and can go from 0-60 mph in 2.9 seconds.

Is a Bugatti faster than a Lamborghini?

The world’s fastest supercar is a Bugatti Chiron Super Sport 300+. It has a top speed of 304 mph which is more than the maximum speed of the fastest Lamborghini.