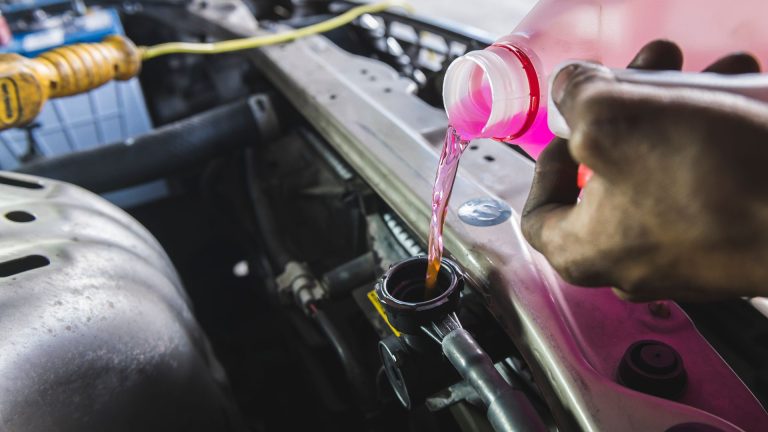 Your car’s coolant or the liquid from the engine cooling system is essential for keeping the operative temperature stable and preventing overheating. However, you might experience a sudden drop in coolant level, triggering the question – does coolant evaporate?

No, coolant doesn’t evaporate since it’s placed in a closed system, and it’s only possible for the water in coolant liquid to evaporate if exposed. So, if you notice that the coolant level significantly varies in short periods, it’s worth considering if you leak. This guide will help you understand the circumstances behind the missing coolant liquid that make it seem as if it evaporated.

If everything is alright with your engine cooling system, it shouldn’t be possible for coolant to evaporate. On the other hand, the watery component of the cooling liquid could evaporate in case it’s exposed to immense heat.

However, other chemicals in the coolant can remain liquid and even withstand the extreme temperature of the engine when it heats up. Because of that, it’s unlikely that you’ll experience a significant drop in the coolant level due to evaporation.

It can either be a leak somewhere in the system or the damaged radiator cap. So, if you spot a reduction in your car’s coolant reservoir, you should rule out evaporation as the cause. It’s also possible that the coolant reservoir is overflowing if you have a damaged thermostat or radiator cap.

In this case, you might notice bubbling or boiling coolant on the radiator cap, so that’s yet another sign that coolant can’t truly evaporate as water does.

Losing a bit of coolant due to open radiator cap

The coolant liquid in your car is often a mixture of the “antifreeze” and water in the system, and it’s protected from the atmosphere by a radiator cap. However, if you leave the radiator cap slightly open, a small portion of the mixture may eventually evaporate.

Of course, this only refers to the watery component of the coolant liquid, so you shouldn’t lose much in a long run. If the radiator cap isn’t properly sealed, or it’s damaged, chances are that you’ll lose a tiny bit of the liquid.

It’s still much different from how water would evaporate if the cooling liquid was pure water. That’s why if you get a coolant leak overnight, you’ll find the puddle of it below your car in the morning. Even extreme summer temperatures won’t cause the coolant trace to completely evaporate, which is good in this case.

Otherwise, you might not notice that there’s a leak somewhere in the system. On the other hand, if the cooling liquid were to evaporate like water, there wouldn’t be a point in using it to cool down a heated engine.

Reasons behind a sudden loss in coolant level

If you notice a drop in coolant liquid level by taking a look at the reservoir, it could be a dangerous situation for your engine. Coolant passes through the engine and leads away the heat, so any drop in the coolant level could result in high engine temperatures.

That could lead to a car overheating and going back to normal, and a lot of other difficulties which mostly lead to overheating. Here’s a list of potential reasons behind a sudden drop in coolant level to help you avoid the worst-case scenario:

It can also be a result of the damaged thermostat, which is another important part of your car’s cooling system. The thermostat measures the temperature and opens its valve to let the coolant from the radiator reach the engine.

However, if it gets faulty or broken, the valve might get stuck open, and it will cause too much coolant to leave the reservoir. So, in this case, a faulty thermostat could also be one of the reasons behind your coolant liquid disappearing from the reservoir as if it was evaporating.

This is something that can easily happen caused by other coolant leaks in the system. If your engine keeps overheating and raising the temperature, you might end up with a blown head gasket. It’s quite a bit issue, and you might end up losing even more coolant because of it.

If the head gasket is blown, coolant will enter the combustion chambers and the immense heat there will cause it to evaporate. Because of this, you might notice sudden drops in the coolant level, and white smoke from the exhaust.

Still, the coolant loss would be the least of your concerns in this case, since a blown head gasket could cause significant damage to your engine.

Coolant leaking from the system

Perhaps the most obvious reason for sudden coolant loss is a leak somewhere in the cooling system. Leaks usually happen as the radiator hoses degrade over time. Leaks can also occur if you have a faulty radiator or damaged radiator pan gasket.

The most obvious sign of a coolant leak is a powerful sweet smell in the cabin, while you might also notice a coolant puddle below the car. Getting the car’s cooling system further inspected can tell you if you need to make some repairs to keep the coolant level optimal again.

As mentioned, the coolant reservoir cap might not be properly sealed or you might accidentally leave it open. While coolant won’t evaporate too much, the cap keeps the pressure built up so the liquid can travel through the engine’s cooling system rapidly.

Along with the thermostat malfunction, this is a common cause of a certain loss in your coolant liquid level. Because of it, it’s advised to inspect and occasionally replace the rusty reservoir cap with a new one.

The loss or sudden reduction in the coolant liquid level has left drivers wondering about the big question – does coolant evaporate? So, hopefully, you now have a clear picture of the issue and reasons behind the loss of coolant liquid.

While coolant itself doesn’t evaporate, those small evaporations of the water used in the cooling system can also result in a reduction of the coolant level overall. Still, it’s not something you would notice in a short period since it would take years for the evaporated water to stand out.

How long does it take for coolant to evaporate?

While the coolant liquid doesn’t evaporate on its own, the watery component of the cooling system evaporates for about one inch every few years.

Can coolant get low without a leak?

No, coolant can’t get low without a leak since it’s placed in a closed system. However, certain “small” leaks could only manifest in specific situations of extreme temperatures or immense pressure.

What causes the coolant level to drop?

A faulty thermostat, rusty reservoir cap, or leaks in the cooling system could cause the coolant level to drop. Also, if your coolant drops significantly in short periods, you might have a blown head gasket.

Where is the coolant disappearing?

The coolant can either disappear outside your vehicle via a leak, or into the engine compartments and combustion chambers in case of a blown head gasket.

Why is my car using so much coolant?

Your car might use too much coolant in case of a faulty radiator cap or damaged thermostat.

How fast does coolant evaporate?

The coolant liquid itself doesn’t evaporate, but the watery component of the coolant might evaporate for about one inch per year or every two years as the engine gets older.