Coolant reservoir overflowing — how to fix 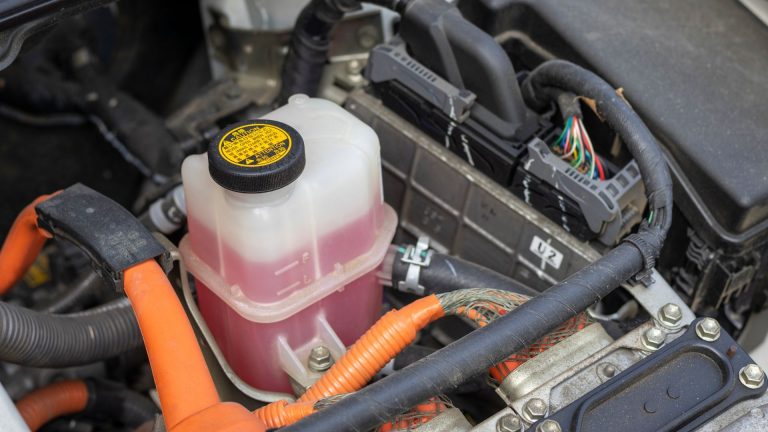 To keep the operating temperature of your engine under control, every car has a radiator and coolant liquid. But, what happens if you find your coolant reservoir overflowing? It’s not a vital issue as long as you address it as soon as possible, but further complications are possible.

If you have an overflowing coolant reservoir, the consequences can prevent the cooling system from properly affecting your engine. That’s why our team dug deeper to bring you this guide on what could happen in case of a coolant overflow, and what you can do about it.

Purpose of the car’s coolant reservoir

The coolant reservoir in your car contains the coolant liquid which works with the radiator to cool down your engine. Without enough coolant, or in case of a leak, your car could be overheated and won’t start properly.

However, the coolant liquid is only released once your engine gets hot and the radiator starts working. It blows over the coolant liquid and therefore releases cold air needed to take out the excess engine heat. After that, it’s safely contained in the coolant reservoir, so the overflow could be potentially dangerous.

First, if the coolant reservoirs start overflowing, the liquid will get through the system around the engine even when the radiator isn’t turned on. You might not know this, but overfilled coolant might lead to electrical damage around the engine.

Precisely, the hoses and wiring can be damaged by the excess coolant that generates more pressure and could cut the connections. On the other hand, the overfill can turn out to be a leak and it can lead to much more dangerous scenarios.

If you don’t have enough coolant liquid in the reservoir, the engine’s temperature can get too high. The radiator won’t be able to take out excess heat, which could result in overheating.

All the reasons why your coolant reservoir might be overflowing are in cooling system faults. Of course, you might have just overfilled the reservoir by pouring too much coolant into it, but here are some other reasons to check:

One of the first things you should check in case of a coolant overflow is the thermostat. It regulates the flow of the coolant liquid and is fairly easy to diagnose. You might notice a drastic variance in the engine’s temperature gauge along with the coolant leaks under the car.

To prevent further issues like engine overheating, you can replace the thermostat since it’s one of the cheapest components of the system. On the other hand, the water pump helps circulate the coolant through the engine and back into the reservoir.

In case you have a faulty water pump, the flow of liquid won’t be as it should and it might appear as an overflow. There are also two potential issues you can have with the radiator that might cause a coolant system overflow.

The most common reason for a coolant overflow is a loose or damaged radiator cap. It keeps the coolant liquid contained when the radiator isn’t working and releases a portion of it when the cooling process starts. If it’s loose, it might cause an overflow, and It’s one of the fortunate scenarios since it can easily be replaced.

A bigger issue could be a faulty radiator since the radiator serves an important role in the cooling process. The radiator is important for heat exchange, as it blows on the coolant liquid which has previously picked up heat from the engine.

Cold air is therefore released, and if the radiator malfunctions, it’s possible that the liquid will simply start to overflow. Fixing the radiator can be a bit more expensive and challenging to fix the overflow issue since it’s made of metal and plastic materials. It’s not uncommon to see a radiator leak and for that to be a cause of improper coolant circulation through the engine block, so this is a vital component to check.

Dealing with the coolant overflow issue

The best thing you can do on your own to fix the coolant overflow is to replace the radiator cap. It’s most likely what’s causing the overflow, by letting a bit of coolant out even when it should contain it. It;’s a cheap solution worth trying out, and if that doesn’t work, you should visit a mechanic.

It’s not worth tampering with the components of your car’s cooling system on your own, and the mechanic will advise you on which parts you’ll need to replace.

Possibly an unexpected consequence of an overfilled coolant reservoir is damage to the system that leads to future leaks. For instance, the hoses can burst due to extremely high pressure accumulated by the heated coolant.

Damaged hoses can lead to coolant leaks, and if your engine doesn’t receive enough coolant, it could overheat. That’s why it’s crucial to have a mechanic inspect the entire cooling system, including the thermostat, radiator, cap, and hoses. This way you’ll be sure that there won’t be any additional problems like leaks caused by the overflow.

A coolant reservoir overflowing issue could pose a threat just in case you don’t deal with the issue right away. Replacing the radiator cap or a broken thermostat is the cheapest and fastest solution, while the radiator could be more expensive to replace.

Either way, this guide will surely help you diagnose the issue, so you can easily make the repairs at the local repair shop!

What happens when a coolant reservoir overflows?

When a coolant reservoir overflows, a bit of coolant liquid escapes the reservoir and the engine’s temperature heats it. Because of this, the coolant emits high pressure which could damage the wiring over the engine and electrical components.
One of the major consequences is engine overheating, which could lead to permanent damage done to the engine. The overflow hose can also be damaged and it could prevent the engine from receiving the needed coolant to hold the heat down.

Why is my coolant bubbling but not overheating?

If your coolant liquid creates bubbles, but the temperature gauge doesn’t lean towards the hot scale, you might have air in the coolant liquid. Air pockets create bubbles in the coolant reservoir, and the air leak might occur due to a bad radiator cap.
While that’s nothing to worry about and can be solved by replacing the cap, a blown head gasket is a more serious threat. If you notice the bubbles as soon as you start the engine, you might have a blown head gasket.
The air is therefore sent from the cylinder through the cooling system and it reaches the coolant reservoir. Don’t try to deal with this issue on your own – immediately drive the car to a repair shop if you spot this issue.