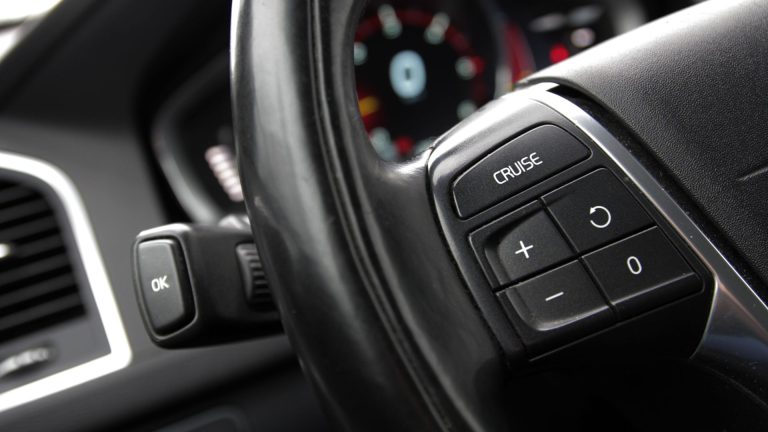 Cruise control is one of the most useful modern driving features which makes every longer journey easier. It lets you travel at a constant speed and reduces the pressure on your foot caused by frequent gas pedal pressing.

However, in case of the cruise control not working, it’s important to deal with the problem right away. If you turn the system on while it malfunctions, you might not be able to turn it off during the drive. So, you can follow this guide to get all the information about the most common reasons for failing cruise control and get advice on how to fix it.

What’s cruise control and how does it work?

To get a better understanding of possible reasons behind malfunctioning cruise control, it’s time to deal with the basics behind the system. Cruise control is an electronic system that helps you maintain a certain speed level for extended periods without holding your foot on the gas pedal.

While driving regularly, the pressure with which you push the gas pedal is transmitted to the throttle position sensor which controls the throttle valve. If you press the pedal further down, the valve gets open, and more air flows into the engine.

On the other hand, if you apply less pressure, the valve is nearly closed, slightly letting air in. The engine control unit (ECU) uses these measurements to calculate fuel injection and translate the pressure into driving power and speed.

With modern improvements, there’s also the introduction of adaptive cruise control which uses several drive assist systems to maintain your speed. These include lane assist and the possibility to increase and lower the speed by pressing the button.

Modern cruise control also measures the speed of the car in front of you in the lane to maintain a safe distance. If you are a car guy, you probably enjoy having control over the machine yourself. However, cruise control is extremely useful during a long highway ride, since it reduces the fatigue and pain of pressing hte4 accelerator for hours.

Reasons behind cruise control not working

Now that you know how the cruise control system works, it’s time to dig deep into the possible reasons behind its malfunction. First, we come by electrical issues since this is an electrical feature after all. However, there are also other possible reasons, so let’s take a look at a few of the most common ones:

All of these reasons can make your cruise control ineffective and the worst thing is if it malfunctions while you are using it. It’s also a bad thing since cruise control saves gas while on long journeys down the highway, so you’ll want to fix the problem based on the listed reasons as soon as possible.

As mentioned, cruise control is an electrical system and it uses the readings of multiple sensors to adjust and maintain your driving speed. Out of these sensors, the throttle position sensor and the speed sensor are most relevant for the system’s operation.

We already mentioned how the throttle position sensor affects the control of the throttle valve, and the speed sensor monitors the driving speed. It sends information to the ECU regarding the traction control system by the speed readings. If the sensor fails, you’ll likely experience some strange speedometer action and an anti-lock braking system (ABS) warning light on the dashboard.

So, the cruise control system might also fail, as it uses the readings of these sensors as well as the data of the ECU regarding traction control and ABS usage.

One of the easiest fixes for a bad cruise control system is to just replace a blown fuse. If this happens, you can just take a look at the fuse box by referring to the owner’s manual of your vehicle for the exact location. Usually, there’s a fuse box under the hood or just the left of the steering wheel in the car’s interior.

If there’s a circuit short, the fuse might blow, and simply replacing it will bring the system back on again. Also, other electrical issues can occur such as a bad connection with the control buttons on the steering wheel or electrical connections

The mechanical system also uses an actuator and hoses, and these could all wear off due to frequent usage. So, if any of the mechanical components malfunction, you won’t be able to use the cruise control system.

If your cruise control system works on some occasions, while it fails on others, don’t use it while driving. It’s not safe and the best thing you can do is inspect the system based on the reasons behind a malfunctioning cruise control.

You can do some repairs yourself, including testing and replacing a blown fuse. On the other hand, you’ll need the help of the mechanic to replace a bad actuator in mechanical systems or to fix the brake pedal switch.

Overall, if you spot your cruise control not working, you shouldn’t use it while driving until you make the repairs. Some systems will fail on some occasions, while you’ll sometimes be able to use them regularly. It’s still better to inspect the system based on the common reasons behind its failure listed in this guide and make proper repairs.

This way, you can save yourself some trouble, along with gas and effort while driving with the cruise control system active.

What could cause the cruise control to stop working?

A blown fuse or a faulty brake pedal switch could cause the cruise control to stop working, along with malfunctioning sensors.

How do I know if my cruise control fuse is blown?

You can know if your cruise control fuse is blown by taking a look at the fuse box, and you can find the fuse box location in the owner’s manual.

Where is the fuse for the cruise control?

The fuse for cruise control is located within the fuse box under the hood or at the left of the steering wheel.

How much money does it cost to fix cruise control?

It costs anywhere from $10 for a replacement fuse, to $500 for the actuator or the throttle body repair to fix the cruise control system.