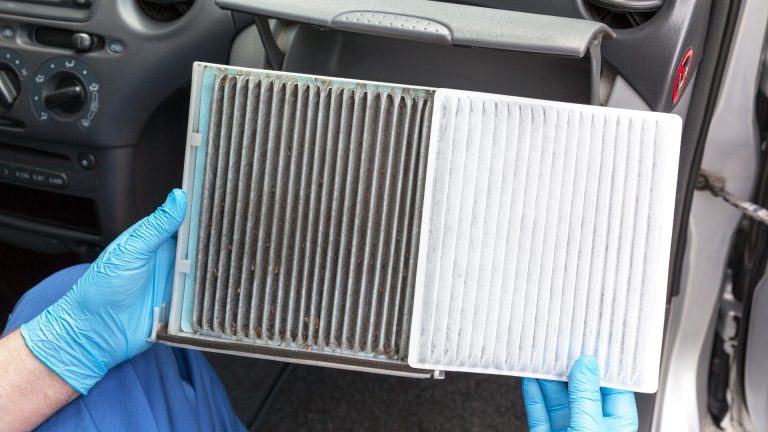 As a driver, you’ve probably heard about the air filter in your car which filters dust and other particles from the air intake and prevents them from reaching your engine. However, many drivers don’t realize that there are two air filters in their cars.

While the engine’s air filter is a crucial one, the importance of the cabin air filter shouldn’t be overlooked. If your car didn’t have this filter, you would end up breathing in all sorts of contaminants while driving. So, our team will help clarify things about the cabin filter in a car and the role of this filter in your driving machine.

What does a cabin air filter do and how does it work?

The role of a cabin air filter in your car is to keep all the dirt and contaminants entering the HVAC system from reaching the interior of your car. By doing this, you get to breathe healthy air and there’s no need to lower your windows just so you can take a deep breath of fresh air.

The whole process starts with the HVAC vent under the hood since this is where fresh air gets pulled into the climate control system of your car. The air goes into the heater box where the cabin air filter is located. As air goes through the filter, it holds back dirt, spores, and other contaminants.

Also, some systems are equipped with an activated charcoal unit that absorbs chemicals. Clean air then enters the blower motor and it flows through the evaporator.

Depending on the temperature setting, the air then either goes through the vents or the heater core in case you’ve set the A/C to a hot setting. Either way, if the cabin air filter is clogged and dirty, you won’t receive fresh air and you could potentially put your health at risk by breathing in the contaminants.

The biggest problem you’ll face with a clogged cabin filter is the poor air quality inside your car. However, it’s not the only problem that might occur. Without a working cabin filter, the passengers will be exposed to allergic reactions and breathing problems which is especially dangerous for those with asthma.

While your health and the health of your passengers are the most important, there’s also the problem with poor HVAC system efficiency. As mentioned, fresh air that enters the HVAC vent goes through the cabin air filter, and if the filter is dirty or clogged, it will reduce the airflow capacity of the system.

So, you might notice that the air coming through the vents is weak even when the blower setting is turned to the highest speed. It’s also a problem for the windshield defroster since it might take more time to clear the windshield from the fog.

The cabin air filter is located in the glove box area and it’s not something you can easily access without removing the plastic cover. Still, you can recognize a clogged filter by other signs even without doing a visual inspection.

If you notice any of the following problems, you can know that the cabin air filter is dirty or clogged:

You’ll mostly notice a change in airflow and an odor coming through the vents if the cabin filter is dirty. It won’t be able to do its main job in this case, and it compromises the air quality inside your car’s cabin. You might also hear a squealing sound when the A/C is on, so it’s crucial to replace the air filter as soon as you notice any of these symptoms for your driving experience and your health.

The recommended period for changing the filter

The period for changing the cabin air filter depends on a lot of variables. It’s not uncommon for these filters to last longer in cars driven mostly on highways. If you are mostly driving on public roads and get stuck in jammed traffic, the filter might need to be replaced sooner.

On average, you should change the cabin filter in your car every 12,000 miles to 15,000 miles. This also depends on the car model, so it’s best to refer to the manufacturer’s recommendations when it comes to changing the filter.

These filters mostly cost in the range of $20 to $50, so it’s worth replacing them once a year regardless of the mileage, just to be safe. If you spot an increasing amount of dust settling on the surfaces inside your cabin, it’s time to check the filter since it may be time to replace it sooner.

Keeping your car’s cabin surfaces clean and picking up the dust is a must for every driver. Still, it’s worth checking the cabin filter every once in a while to see if you might need to replace it sooner than expected. This happens for a variety of reasons, especially if you’ve been driving on a dirt road or if you are driving an SUV for off-road tours.

You can refer to the owner’s manual of your car for precise instructions, but it’s possible to reach the air filter behind the glovebox zone in most cars. You don’t need the help of a mechanic to do it, and taking off the plastic cover and reaching behind the glovebox is the first step.

The next step is to take out the filter for inspection, and you should be careful here since some cars have two cabin filters. It’s not enough to just look at the filter, you’ll need to inspect the internal section of the pleats and take a closer look at the filter material.

Getting an aftermarket air filter can also sometimes be a good idea, especially considering the significant advancements lately. You can find cabin filters that can keep out particles as small as two microns. To demonstrate how small that is, a micrometer is one-thousandth of a millimeter, so both you and your passengers will be safe.

Changing the cabin filter in a car is important both for your health and the airflow of the cabin vents. It’s one of the parts that are often overlooked and most drivers will replace the engine’s air filter before the cabin filter. In reality, both are equally important for making your engine perform at its best, and helping you receive fresh air in the cabin.

It’s always worth checking the filter just to be safe, and replacing it on time will make your everyday driving much more comfortable.

What is a cabin filter on a car?

A cabin filter on a car is an air filter that helps maintain the airflow capacity from the cabin vents and keeps out the harmful dust and particles from the air you breathe in your car.

What happens if you don’t change the cabin air filter?

If you don’t change the cabin air filter, you might be exposed to dust, allergens, pollen, and other air contaminants that won’t be filtered from the air that enters the HVAC vent and you’ll breathe in those contaminants while driving. Also, the capacity of vents inside your car’s cabin will get weaker and weaker.

How often should you change the cabin filter in a car?

You should change the air filter in a car every 12,000 miles to 15,000 miles, but it all depends on the model and driving conditions. It’s best to check your manufacturer’s recommendations since this time frame could differ.

Do you need to change the cabin filter in a car?

Yes, you need to change the cabin filter in a car to keep the cabin air fresh and healthy.