What voltage is a car battery? 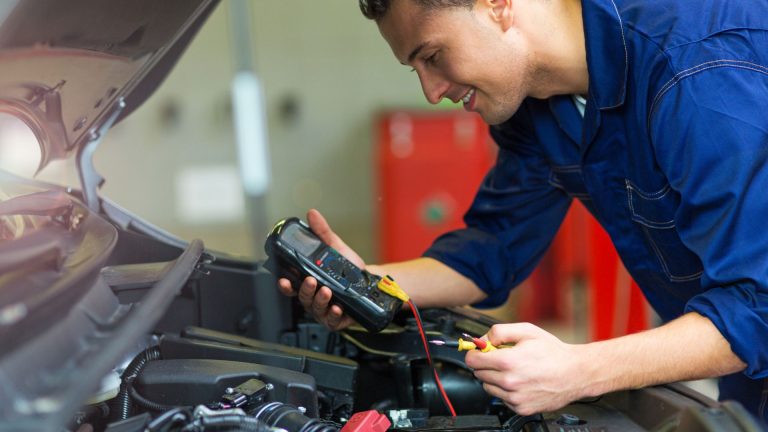 The battery is one of the most critical elements in a vehicle’s engineering. Your car will not start with it.

The battery has to provide the right amount of electricity for the electrical components of a vehicle to work. It also delivers voltage to the starter, which helps your engine start when you turn your key in the ignition.

In the wrong amount, the voltage would fry some components or do nothing at all. So, what voltage is a car battery?

A fully charged and adequately functioning car battery measures 12.5 volts and is considered “the resting voltage.” During use, the voltage rises to about 13.5 to 14.5 volts.

This article will explain all you need to know about the voltage of a car battery with tips on maintaining it properly.

What is the role of the battery in a car?

To better understand the concept of volts and the car battery, we need to look at the role of the battery in a car. We summarize the function into the three steps below:

The car battery stores electrical energy in the compounds that are used as the anode, cathode, and electrolyte. The cathode is responsible for receiving electrons necessary for charging the battery. At the same time, the anode gives out electrons, enabling the battery to perform its actual function in a car.

The alternator, otherwise known as the electric motor, receives electricity from the battery and moves to convert it into mechanical energy, which is used by other components in the vehicle.

Almost all utilities in a vehicle depend on the battery for their operation, making it the second most crucial part of a car after the engine.

How many volts are in a car battery?

A fully functional car battery ranges between 12.6 to 14.4 volts at different usage times. For general purposes, the car battery is referred to as a 12-volt battery.

What is the connection between the battery voltage and CCA?

Cold-cranking amps (CCA) is the number of amps a battery can support for thirty seconds at zero degrees Fahrenheit while maintaining a voltage not less than 7.2 volts or before the voltage drops to levels where it’s useless.

The CCA is an indicator of your battery’s abilities during the winter. The higher the CCA value, the stronger the starting power.

How much voltage does a vehicle need to start?

The voltage is considered too low if it measures below 10.8 volts before starting. The vehicle will not start, and you may need to replace the battery as it is most probably damaged.

A resting voltage between 10.8 and 11.8 volts is still low but usable. It will stress you as you will have to try several times with all the electrical appliances off so you can have a chance to start the vehicle.

If, after starting, the voltage lies between 12.8 to 13.2 volts, the alternator may not be able to charge the battery. The average voltage a car battery is supposed to have after starting should lie between 13.2 to 14.8 volts.

A voltage above 14.8V when the engine is running is too high and may damage the battery.

Why does my car have insufficient voltage?

There are many reasons why your car has an insufficient starting voltage. The most common cause is car neglect. If you do not start your vehicle in a long while, the lead-acid battery inside the car will self-discharge, reducing the battery’s voltage with time.

The other reasons why your battery voltage is too low are:

The voltage regulator and alternator are usually built as one unit. They will supply a low voltage when either weak or faulty.

If the load on the charging system is higher than the alternator’s capacity, there would be a drop in voltage which can affect the battery’s charging. Faulty electrical components are notorious for increasing the load on the vehicle’s electrical system, causing the voltage to drop and consuming a lot of currents.

Bad battery terminals experience a voltage drop. Consequently, the voltage that would be made available will either be too low or not enough to start the vehicle.

To avoid this issue, it helps to clean the battery’s positive and negative posts regularly. Endeavor to replace bad terminals as soon as possible to avoid getting stranded in the wrong place with an unresponsive battery.

Connections can get loose due to mishandling during repairs or replacement or from corrosion. When the connections are too loose, the electrical contacts where cables terminate or join will be poor or lost. Therefore, you should check the connections properly after any operation for loose connections and corrosion for early addressing.

Alternators have a charging capacity that determines what battery you should use them with. If you make the error of using an alternator with a charging capacity lower than what a battery can work with will not deliver the right amount of current and voltage. When getting a new alternator, you should remember to consider the vehicle’s battery and electrical load.

The electronic control unit (ECU) in most modern vehicles controls the car’s charging system. A hardware or software ECU malfunction causes irregularities in its operation which can reduce the available battery voltage. For instance, a faulty ECU can dial down the alternator’s output voltage, which can easily be mistaken for a fault with the alternator.

What happens when the voltage is too high?

The primary cause of voltage surges is lightning and switching impulses of the electrical system. A resting voltage higher than 12.9 volts indicates that the battery is overcharged.

When a battery is overcharged, and the voltage is too high, overheating occurs, causing premature failure of electronic and electrical components. The damage is irreversible and accumulative.

How do I maintain and maximize my car battery?

Although batteries produced recently are classified as being “maintenance-free,” you can adopt a few practices to maintain and maximize the batteries to their full potential.

You can check your battery voltage using the voltmeter, which is inexpensive and common in many automotive parts stores. A low battery should be charged as soon as possible. Cars not in use should have a battery tender connected to ensure the battery remains fully charged.

If you use the old maintainable battery, always ensure the electrolyte level covers the lead battery plates for all the cells.

For the modern maintenance-free battery type, it is best to pay attention to the State of Charge Indicator. Whenever the indicator recommends a battery replacement, please take it to an approved reseller for testing. If the electrolyte levels are too low, replace them immediately to prevent an internal explosion.

Keeping the battery clean with thin high, temperature grease coating at connections and posts will save you from much corrosion. A dirty battery reduces service life, and discharge can result from grime at terminal posts.

It is recommended that you charge your batteries every three months, even when the voltage is right. Doing this with the proper charger will positively impact your battery health.

The proper voltage is needed to start a car and keep it running without destroying any electronic and electrical components. A car battery in good condition should have 12.6 volts when the engine is not fired up.

Performing routine checks on your battery will save you the stress and cost of repairs worsened by a late fault evaluation. If you intend not to use your car for a while, connect a battery tender to the battery to preserve its health.

At what voltage is a car battery considered bad?

A car battery is considered bad when the voltage is less than 12.0 volts. The driver of a vehicle with such low voltage will experience difficulty in starting the vehicle or may not be able to start the car at all.

The 12V car battery consists of 6 cells, each containing 1.2 volts when the battery is fully charged. Their combined effort is what makes the battery work.

At what voltage is a 12v battery dead?

At 11.6 volts, a 12V battery is almost dead. The chances of you being able to salvage it are very slim. At 10.8, the battery is completely dead.

What voltage should a 12V car battery have?

A 12V car battery should have 12.6 volts when the engine is off. Anything less than 12.6 will give you problems with starting the vehicle.