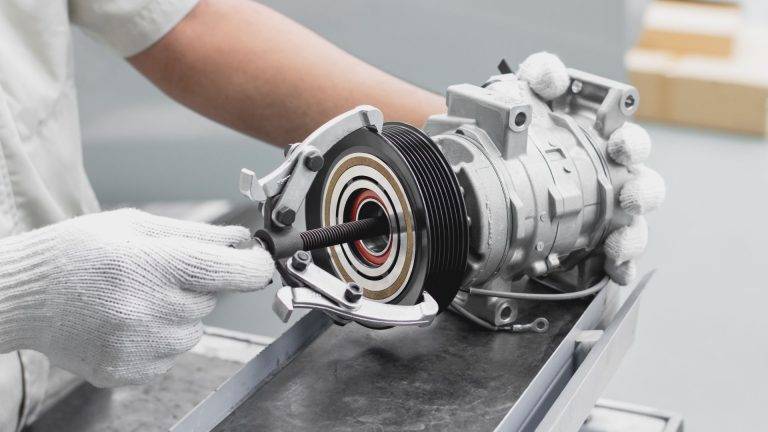 Climate control in your vehicle significantly affects your mood while driving, especially during hot summer days. Still, many drivers don’t know what the most important part of the A/C, system does. So, it’s no wonder that you might not notice signs of a bad A/C compressor on time, and this leads to no cold air.

It’s frustrating to deal with a malfunctioning A/C system in your vehicle, so our team wanted to help with this guide. We’ll go over the main symptoms of a failed A/C compressor, as well as its role in the system. That way you’ll never fail to replace the faulty components if your compressor were to malfunction.

What’s an A/C compressor and how does it work?

The A/C compressor in your car pressurizes the refrigerant which absorbs the heat from the air, leaving you with cool air as a result. Without it, you wouldn’t be able to get any cold air reaching the cabin through the vents.

It’s driven by the serpentine belt and is located between the condenser and the evaporator. The A/C compressor has a clutch and a coil, and the belt drives the clutch. As it rotates, it moves the pistons and the swashplate that create pressure, affecting the refrigerant.

It starts the temperature exchange cycle where heat from the air is absorbed, leaving cold air behind. It all happens thanks to the A/C compressor. The pressure created by the compressor pushes the refrigerant through the condenser in a gaseous state.

There’s a fan that blows on the gas in the condenser, as well as a drier that helps turn the gas into a liquid. Now in a liquid state, the refrigerant keeps traveling through the system with high pressure initially generated by the compressor.

Through a series of tubes, it reaches the expansion valve and the pressure is finally relieved before entering the evaporator, cooling the liquid down. The evaporator eventually affects the liquid, turning it back into gas and the blower pushes the cool air through your A/C vents. Absorbed heat gets pushed back into the compressor, so the process starts over.

Symptoms of a bad A/C compressor

Now that you know how it works, you probably realize that without a working A/C compressor, there’s no heat exchange. Moreover, the refrigerant can’t get pushed through the system with high pressure, turning the hot gas into cool air along the way.

Luckily, you can easily recognize a faulty compressor based on some common symptoms, such as:

You can also use a scanner tool to inspect the system for any error codes regarding the A/C compressor. Connecting the scanner to the OBD2 jack in your car might pop up codes like P0534 or P0531. The first means there’s a problem with the compressor clutch or that it’s engaged more frequently than it’s supposed to.

On the other hand, the latter simply implies there’s a change in the refrigerant’s pressure, so that might indicate a faulty compressor.

Strange noises as the A/C is running

One of the best ways of telling if you have a faulty A/C compressor is by turning on the climate control and listening carefully. If you hear a squealing noise when A/C is turned on, it indicates there’s a problem with the compressor.

The source of the noise could be a slipped serpentine belt that can’t drive the compressor clutch, a damaged pulley, or even bad bearings. The compressor might still struggle to work and that’s why you’ll only hear those noises when climate control is engaged.

Another sign of a bad A/C compressor is if your car’s A/C only blows hot air. A faulty compressor can’t pressure the refrigerant and make it absorb the heat from the air. So, there’s no temperature exchange and you’ll only get hot air blowing through the A/C vents.

Even as you switch to the cool air setting, there won’t be any change in the system. So, make sure to have your A/C compressor inspected if there’s no cold air pushed through your climate control.

Of course, the faulty compressor isn’t the only reason why you won’t get cool air blowing through the vents. It can also be a result of low refrigerant levels, and the compressor can’t do its job right when there’s not enough refrigerant.

The A/C bearings tend to go bad over time and lose their sealing ability, so the liquid can escape.

If everything is working regularly in the A/C system, you should hear the A/C clutch engaging as you turn on the blower. However, if you hear a loud, grinding noise when turning the climate control on, it could be a sign of a bad or worn clutch.

It’s bad for the entire compressor to run climate control with a failing clutch since it can damage the operative cycle of the pistons and swashplate. Besides a squealing noise caused by the skipped belt on the A/C compressor, you can also hear the grinding noise if the clutch goes bad. These noises are warnings you should have your A/C unit inspected, starting from the compressor.

Well, now you know all the important signs of a bad A/C compressor, so you can fix it as soon as these symptoms occur. While it’s possible to repair the clutch and the compressor, it’s often better to replace it with a new one.

That way you can keep getting cool air blowing through the vents in the summer, and you won’t have to deal with refrigerant leaking from cracked bearings anymore.

How do you know if the AC compressor is out?

You can know if the A/C compressor is out if you hear a squealing noise when turning the climate control on, if there’s only hot air blowing through the vents, or if there’s a refrigerant leak somewhere in the system.

Will a bad AC compressor affect the engine?

Yes, a bad A/C compressor can affect the engine through the pulley as it’s connected to the engine’s power by the serpentine belt.

Is it OK to drive a car with a bad AC compressor?

It’s not OK to drive a car with a bad A/C compressor as it can only inflict further damage on the climate control system and result in expensive repairs.

What happens if the AC compressor fails in the car?

If the A/C compressor fails in the car, you might only get hot air blowing through the vents, and there won’t be enough pressure on the refrigerant to cool down the cabin air.