Muffler delete vs straight pipe — which is better? 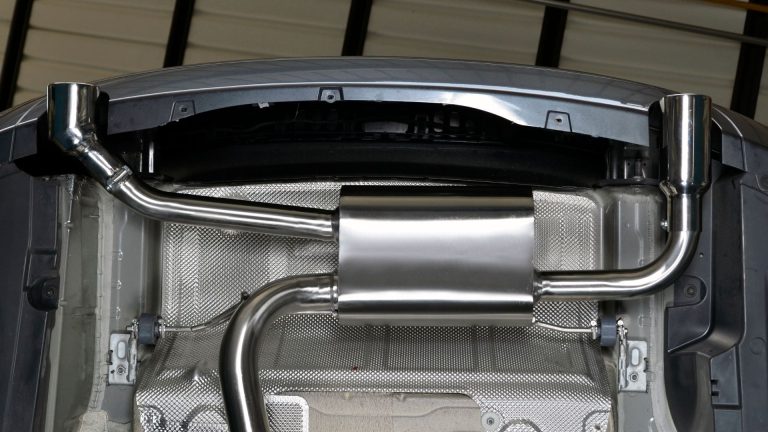 Your car’s exhaust system has a lot of inner components that lower the emissions, but they also keep the engine’s sound reduced. So, if you are trying to enrich the sound of your engine’s exhaust and give it a few pops and bangs, there are several options you can consider.

Still, chances are that you are in the muffler delete vs straight pipe dilemma since these are the most common sound modifications. Don’t go rushing into the project before you get to know everything about the consequences of these modifications and their true meaning. If you aren’t familiar with them, you can rest assured that this guide will give you all the information you need.

What’s the exhaust muffler and what does it do?

The muffler is an exhaust system component that lowers the sound of your engine to keep it optimal for everyday driving. Regardless of the cubic capacity and whether it’s a turbocharged or naturally aspirated engine, all modern cars have mufflers.

It just can’t be helped, since the engine’s noise is much louder than you may think. Because of it, the noise generated by revving a car goes through exhaust valves and reaches the muffler. At this point, the sound passes through the muffler tubes which then re-direct the sound and cancels its noise.

Not every car has the same type of muffler, and that’s why you might see a car model with the same engine specifications as yours sounding different than your car. Mufflers aren’t among long-lasting car parts, and they often wear off due to heat and moisture. So, your vehicle might change its exhaust sound over the years.

Doing a “muffler delete” on your car simply means removing the muffler altogether from the exhaust. That will generate a pure engine sound and the exhaust will be much louder than with a muffler mounted on it.

The meaning of a straight-piped exhaust system

Unlike muffler delete which only includes taking the muffler off, the straight-piped exhaust doesn’t have any exhaust components. So, there are no mufflers, no catalytic converters, and no resonators. All these add up to the lower emission of exhaust gasses, but they also lower the sound of the engine.

In this modification, a mechanic will replace your exhaust with a straight pipe going all the way. Without the mentioned exhaust components, your car will also likely get about 10 additional horsepower. There’s no “back pressure” so exhaust gasses travel faster.

It adds up to the roaring sound of your engine and is a bit of a performance boost. However, is it all worth the risk? Straight-piped cars come with higher exhaust gas emissions and they are sometimes too loud for everyday driving.

On the other hand, straight-piped exhaust systems aren’t legal in the US, while custom exhaust systems are also under regulations in most European countries. Of course, there’s a way around these legal limits, as long as your straight pipe isn’t the loudest one out there and it doesn’t result in smoke coming out of your pipes.

Consequences of doing a muffler delete on your car

Now that you know the mechanics behind muffler deletes and straight-piped exhausts, it’s time to deal with the advantages and downsides. Of course, the first thing that comes to mind is the exhaust sound, and muffler delete does a pretty good job.

For instance, you can make your 3.6-liter V6 Chevy Camaro sound like a mighty 6.2-liter V8 Camaro Super Sport. Of course, the modified exhaust doesn’t compensate for two extra cylinders and the performance gap, but the sound gets quite close. It unleashes a beautiful melody, but it also gets a bit too loud when driving on high RPMs. Here are some of the main benefits:

Still, there are also notable downsides to removing your mufflers. First off, it can confuse ECU sensors that monitor gas emissions if not done right. This could further lead to rough idling and even loss of power.

On the other hand, legal restrictions prevent you from removing the mufflers, although it’s not so easily checked. Finally, without the muffler, some dirt or debris could form within the pipes, and it leads to smoke coming from the exhaust.

Pros and cons of a straight-piped exhaust

Like with muffler delete, putting a straight-piped exhaust instead of your factory pipes also come with certain benefits and flaws. The first thing that comes to mind is the raw and pure sound of your engine with a straight pipe.

It’s just a straight pipe going from the exhaust header, so it represents the true sound of your engine. A bit of extra torque and horsepower shouldn’t be overlooked either, especially on high revs where you can get that tiny bit of extra peak power. These are the main benefits of a straight-piped exhaust:

Even so, the downsides are perhaps even greater. Without the resonator, catalytic converter, and muffler, your gas emissions will significantly jump. Also, you might hear a sort of droning sound when traveling at a constant speed, which might get bothersome over time.

If you equip your daily car with a straight pipe, it can be fun at first, but deafening in a long run. Many drivers also wonder about the cost of straight-pipe exhaust system, and it’s more expensive than muffler delete since you’ll need a custom pipe.

The ultimate sound test – which one sounds better?

If you are willing to turn a blind eye to the regulations and increased gas emissions, both muffler delete, and straight-piped exhaust significantly change the car’s sound. However, if you have resonators and more mufflers in the exhaust system, straight pipe exhaust will sound better.

It’s a universal solution for those that wish to hear the raw sound of their car’s engine. On the other hand, muffler delete only achieves a similar effect when there are no more sound-restricting devices on your car. From another perspective, muffler delete gets quite close to straight-piped sound, having in mind you won’t have to replace the pipes.

It’s more convenient to just remove the muffler, so that’s why most drivers decide to go with this option instead of getting a custom exhaust.

Hopefully, this guide will help you solve your muffler delete vs straight pipe dilemma, and pick the best option for your car’s exhaust. Make sure to consider the legal restrictions in your state and gas emissions before making the final decision.

Both muffler delete and straight-piped exhaust will give you a fun ride, especially if you are driving a car with a high-capacity naturally-aspirated engine. Driving a car with exhaust modified this way truly aids in expressing the cubic capacity.

Is a straight pipe louder than a muffler delete?

Yes, a straight pipe is louder than muffler delete exhausts, especially if your car has more than one noise-cancelation device in a factory setting.

Is a muffler delete better for your car?

Muffler delete is better for your car than straight pipe in terms of how easy it is to set it up. With a muffler delete, you just need to remove the muffler, while straight-piped exhausts require installing a completely new pipe.

Yes, muffler delete sounds good and it will significantly raise the tone of your car’s exhaust.

Can straight pipes ruin an engine?

A straight pipe can’t ruin your engine, it only results in higher gas emissions.

Why do people do muffler delete?

People do muffler delete to remove the sound-blocking effect of the muffler’s tubes, chambers, and baffles, so the engine’s sound gets louder.