How to get smoke smell out of the car 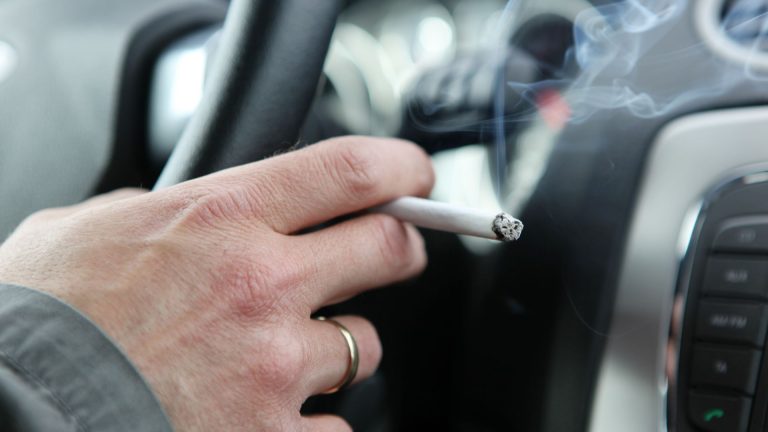 If you just bought a used car, chances are that there will be some necessary investments you’ll need to make. However, besides mechanical investments and cosmetic exterior fixes, there’s also the problem with the vehicle’s interior.

How does a smoke smell stay in your cabin?

You’ve probably seen some used car selling ads stressing that it’s a non-smoker car as one of the main highlights. Well, you might now realize the importance of smoking out of your car if you are facing a smoke smell problem in the cabin.

It’s not just an airing matter – you can smoke in your car with all the windows rolled down, and the smoke will still stick in the car’s interior. It’s an equally bothersome situation as if your car smells like gas, and the only way to regain driving comfort is to remove the smell.

Before getting on with it, it’s important to realize just how exactly the smell stick in your car. Even after a series of attempts to air your car, you might still sense the smell. That’s because the smell gets into the seats, especially if you have cloth seats.

Leather seats are said to hold smoke considerably less than cloth, polyester, and other seat materials. Still, if the previous owner used to smoke frequently in the car with just short airing intervals, the smoke probably persists. It also gets into the other interior elements and if there’s ash spilled somewhere or in the ashtray for too long, that could also be the culprit.

If you are facing a situation as we described above, don’t worry – there are effective ways of removing cigarette smell from the interior. However, the longer the car was used as a smoker vehicle, the more difficult it gets to remove the odor.

Here are some of the main methods you can try to hopefully completely remove the smell:

There are many chemical cleaners for your car’s interior surfaces, but not all of these will help you remove the cigarette smell. It’s a powerful odor so you need to take specific steps, unlike regular cabin cleaning. Of course, it doesn’t hurt to try to air out the vehicle first.

If you have a garage, you should air out the car where you can see it during the day, and leave it with rolled-down windows in the garage overnight. It will probably take at least a few days or a week of airing to remove the cigarette scent stuck in the car for a long period.

If you’ve tried to air out the car and the smoke smell is still there, you can proceed with the vacuuming method. You should vacuum the seats and upholstery, as well as this, which can help remove the odor at least a bit. However, don’t just vacuum your car as you regularly would – removing the smoke smell takes more than that.

You’ll need to move the floor mats and vacuum the space around the ashtray where the traces of ash might have spilled. Make sure to check every spot where the ash might have gotten stuck as it could be the culprit of the smell.

Make sure to leave it there for at least 24 hours to let it collect the smoke smell. It’s best not to drive your car during this period. Don’t worry, baking soda easily gets vacuumed afterward so you won’t have to deal with any interior damage.

You are probably aware of the air filter which keeps the air entering your car’s engine clean. However, there are two air filters in your car, and the second one is the cabin air filter. So, if you are wondering how often to replace the air filter, you should also check the condition of your cabin filter.

Using an HVAC system cleaner can be another good way of removing the smoke smell from the interior of your car. You can clean the HVAC intake by locating it and spraying a bit of HVAC deodorizer or cleaner directly into it.

The HVAC intake is mostly found at the bottom of the windshield, on your car’s exterior. It looks like a mesh and those small holes serve to take in external air as you turn on the air conditioning. So, you can spray the deodorizer and turn the blowing fans on to the maximum level. Make sure to also roll down all the windows, since the cleaner will pass through the intake and enter your car’s cabin.

After this is complete, you should try to leave the windows rolled down overnight, so placing your car in a garage can help you get rid of the smoke smell once and for all.

Clean the ashtray and surfaces around it

Finally, you can simply clean the ashtray with chemicals or simply replace it with a new one suitable for your car model if you can’t remove the smell. If the ashtray was used too frequently without cleaning by the previous owner, chances are that it will be difficult to remove the smell.

You should also clean all the surrounding areas, as ashes might have fallen over them if the previous owner was smoking while driving. It’s a decent last-resort option if vacuuming with baking soda, replacing the air filter, or cleaning the HVAC intake doesn’t work.

Ultimately, this guide hopefully answers the question of “how to get smoke smell out of the car”. You can try the methods listed to quickly remove the smoke smell and restore your driving comfort without bothersome cabin odors.

Make sure to at least check the cabin air filter as it might be the culprit in case recirculating smoke went over it too many times. Also, cleaning your HVAC is a relatively cheap method that can also prevent other bothersome smells like mold from accumulating within the vents.

Is it possible to get the cigarette smell out of a car?

Yes, it’s possible to get the cigarette smell out of the car, but it might be a bit more difficult than removing other cabin smells as smoke odor holds longer in the seats and the carpet.

How long does it take to get the smoke smell out of the car?

It could take from one day to a week to remove the smoke smell of the car depending on the method. Simply airing out the car might require multiple attempts, so it lasts considerably longer than other methods.

Will the cigarette smoke smell eventually go away?

The smoke smell will eventually go away in case of passengers smoke in the car a few times, but if the previous owner was a smoker and often smoked in the car, it will stick for a long time without cleaning.

What is the fastest way to get rid of cigarette smell?

The fastest way to get rid of the cigarette smell is to replace the cabin air filter and flush the HVAC intake with a cleaner.