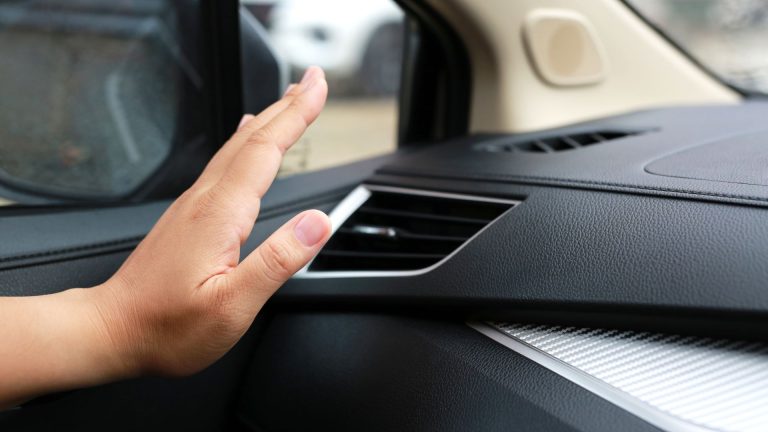 We all know how blessed we are as drivers with the chance to turn on the A/C unit during the hot summer days. Without air conditioning, it’s nearly impossible to focus only on the road, and rolling the windows down doesn’t help much.

So, in case of car A/C not blowing cold air, it’s crucial to figure out the cause and replace the faulty climate component. We’ll deal with some of the most common reasons behind your A/C not operating properly, to help you cool down your cabin again as soon as possible.

How does A/C cooling work?

Before we get into the main reasons behind your A/C not cooling properly, let’s deal with how the system works in the first place. To get the cold air coming through your A/C vents, you need a refrigerant or freon. It’s compressed by the A/C compressor and turned into a liquid state.

The liquid is then pushed through the condenser tubes, where it meets the air drawn from outside via air intake. This helps cool down the liquid since the air takes away the heat from it. The liquid then passes through the expansion valve, which is where it’s turned into a gaseous state again.

It’s pressurized again, and the process starts over with the freon being in the gaseous state. So, if your A/C blows hot air, it could be a matter of low refrigerant or a faulty component somewhere in the system. Let’s go through the main reason behind this to find out why your A/C cooling isn’t working properly.

The most common reason behind the A/C not blowing cold air is if there’s not enough refrigerant in the A/C system. However, the refrigerant circles through the system and switches back and forth from liquid to gaseous state to enable cooling.

So, there might be a problem somewhere in the system that prevents the liquid from doing its job and reduces its level. Here are some of the main reasons behind improper A/C cooling:

As mentioned, the refrigerant liquid starts its journey from the A/C compressor, so a faulty compressor can be the first thing to inspect. You should check the compressor before diving into the other listed issues, and you can do it by physically taking a look if the compressor belt is spinning.

You can rely on your car’s owner’s manual to find the location of the A/C compressor, but it’s often right next to the lower level of your engine’s compartment. Some of the main symptoms of a broken compressor include loud squealing noise when A/C is turned on or even a banging noise. It also results in poor airflow from the vents into the cabin.

A leaking refrigerant is the second most common reason behind your A/C not blowing cold air. So, if your A/C compressor is still spinning, it’s time to look for a refrigerant leak. The refrigerant mostly leaks in the hoses and tubes, but it can be difficult to find the source.

You should get your car inspected by a mechanic since they use a special dye placed in the system to monitor and find the leak. Otherwise, the refrigerant simply evaporates when leaked so you won’t be able to find the source by yourself.

Depending on the leak size, you might have to recharge the freon or flush the entire A/C system and replace it with a new refrigerant.

Problems with the blower motor and fans

The blower motor uses large fans to blow and cool down the refrigerant and it’s yet another common reason behind your A/C blowing only slightly cool or hot air. The fans can sometimes get blocked by debris that clogs them and prevents them from doing the job.

The problem can also lie in the blower motor itself since it can sometimes malfunction. If this happens, it could be due to a bad blower motor relay, a blown electrical fuse, or a problem with the blower resistor. The resistor is a component that receives the signal from the blower speed switch in your car’s interior.

It affects the blowing speed of the motor according to your climate speed setup, and if it fails, the blower motor could stop working. It’s worth checking the electrical connections and fuses before dealing with the resistor or relay since these are more difficult to access.

A malfunctioning condenser or a condenser leak is another common reason and it usually occurs if there’s no change in the refrigerant level. In this case, you’ll have to deal with fixing the condenser, since it won’t be able to cool down the refrigerant and keep it in a liquid state.

The condenser’s coil is mostly where condenser leaks happen, and it’s often caused by corrosion. The liquid will leak and evaporate in this case, and there won’t be enough refrigerant to keep the air cool.

Your car’s A/C evaporator serves a crucial role in the climate exchange process. It exchanges the heat by transferring it from the refrigerant to water vapor through its fins. Then, the cold air is pushed through the interior A/C vents, so it’s worth checking it out.

If the A/C vent airflow is weak and there’s a bad smell coming from the vents, it could be a result of a damaged evaporator. If it can’t do its heat exchange purpose, you’ll be left with only hot air coming through the vents.

Problems with the electrical system

You might also be dealing with a broken cold air cabin switch so the system can’t recognize the cooling function. Also, it’s worth inspecting all the fuses and electrical circuits that are associated with the A/C system in your car.

Still, if there’s a fried circuit, chances are that you would get no air coming from the vents. If there’s hot air but you can’t use the cooling function, it can be a problem with the sensors in the A/C cooling system. With a help of a car electrician, you can examine these circuits and sensors and get your cooling system working again.

If you face your car A/C not blowing cold air, you can rely on our guide to figure out the reason behind it. Our team did its best to deliver all the possible causes behind the trouble, so you can fix the system and get your cooling function back on.

Make sure to try inspecting the refrigerant level first, as it could point out any leaks, and to see if your compressor’s belt is spinning.

How do I fix my AC not blowing cold air?

You can fix your A/C not blowing cold air by refilling the refrigerant and inspecting the A/C compressor and other parts of the cooling system that may have malfunctioned.

Why is my car blowing out hot air when the AC is on?

Your car might be blowing hot air when the A/C is on due to a refrigerant leak, faulty condenser, or problem with the evaporator and electrical circuits.

Why is my AC still not cold after recharge?

Your A/C might not be cold after a recharge due to problems with the condenser and evaporator, so regardless of the refrigerant level, there’s no heat exchange and the air coming from the vents remains hot.