How to prevent rust on cars 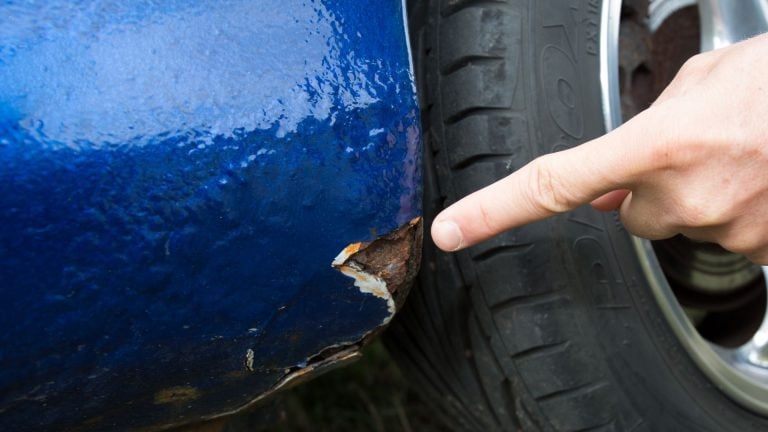 While your car fulfills its most important purpose by letting you drive from point A to point B, a car represents much more to some car guys. Let’s face it – you like your car’s paint spotless and preserved like when it first came out from the production lines.

Well, it’s not that simple to keep your car’s paint that way, and it might require some occasional body shop treatment that comes up quite expensive. So, the big question is how to prevent rust in cars. You can prevent rust on cars by doing timely repairs, washing and waxing your car, and applying an anti-rust coat. If it sounds simple, trust us – it’s not, especially for older cars, which is why we’ve made this guide to help you out.

What causes rust to form on your car’s body?

Before we dig deeper into the matter of rust forming on your car, it’s important to realize why rust forms on your vehicle in the first place. Rust is something that you’ll most likely encounter on older vehicles, but that doesn’t make new cars rust-resistant.

While manufacturers of modern vehicles these days use material blends that should delay rust as much as possible, it’s a threat to every vehicle if not treated in the early stages. Rust acts progressively on your car, meaning that it starts small and progresses to catch a larger portion of the metal.

It happens through the oxidation of metal materials, and the age of your car isn’t the only thing that leads to rust and corrosion. It also occurs more rapidly in wet climate conditions, or areas that receive a lot of rain over the year.

If your car is parked outside the garage during these conditions, it’s not a wonder if it develops some rust. Finally, it even has a bit to do with your driving routines, since drivers of off-roaders often get rust on their SUVs and trucks much sooner than commuter cars.

Rust phases on a car

Since rust on cars gets progressively worse, it’s crucial to notice the rust as soon as it starts appearing on your car. It all starts with surface rust that appears on body panels and if it keeps spreading, you might be facing scale rust.

At this phase, rust can move on to the metal on the body panels and penetrate the interior of metal parts and panels. So, things get worse if you don’t treat the problem right from the start. If rust affects the integrity of the metal, it doesn’t only look bad, but it also could lead to further harm to the metal and eventual replacement.

Ways of protecting your car from the rust

Before it gets too late and rust gets caught up on the metal surfaces and parts of your car, there are several ways you can protect the car and hopefully prevent rust. Here are some of the most effective methods of rust prevention on your car:

Overall, the last resort in terms of rust and corrosion protection on your car is its paint. So, it’s no wonder that many drivers are considering ceramic coat benefits, wax coat, and other means of protecting the paint. If the paint is well preserved, chances are that the rust forming on your car will at least get delayed until the clear coat layer suffers damage.

Rust forms by oxidation of metal surfaces and moisture getting caught up on the paint coat surface. So, even the way you wash your car could make all the difference here, even though you might not realize it at first.

It’s important to properly wash every bit of the paint surface, and use a microfiber towel to pick up the moisture. You shouldn’t stop there, since it makes a great difference if you also wash the wheel wells and the metal surfaces at the bottom of your car.

This way, you can ensure that the rust won’t get caught up on the undercarriage and keep progressing to other metal surfaces.

Paint protection coats could make all the difference

Another thing that could make a great difference is whether you apply paint protection coats or not. It doesn’t have to be a ceramic coat either – you can simply apply a wax coat on your car after washing it, or use other protective coats.

These coats will protect the paint of your car, which is crucial to preserve the metal surfaces from rust. The coat also acts as a protective layer between the surface of the car and its paint. The ceramic coat also makes things like moisture simply glide down the barrier, so it gives you a great advantage in terms of rust prevention.

Rinse the car in colder weather

Another good piece of advice for rust prevention is to rinse your car in the winter. You should sometimes even rinse the car once every few days during the winter time. The reason for this is not mostly in the cold, but rather in salt that gets spread over the roads during snow and when ice forms.

That salt could negatively affect the integrity of metal surfaces on your car, and it leaves it vulnerable to rust and corrosion. That’s why it’s crucial to remove the salt buildup before it tampers with the metal composition, and thoroughly wash it off.

As we said, rust can spread and make its way to scale rust even from a small scratch, so by fixing it, you’ll be doing the rest of the bodywork a favor.

Car parts that get the most rust

There are some car parts where rust keeps forming more often than on the other parts. These parts include the frame rails and wheel wells as some of the most common parts. It’s even possible for the exhaust system and suspension parts to catch some rust, regardless of how unlikely that might seem.

Also, rust often builds up on the doors, boot floor, and the metal area around the windshield. So, wherever there’s metal, rust can tamper with your car’s paint and parts.

If you’ve been wondering “how to prevent rust on cars”, this guide hopefully provided all the sufficient answers. It’s not something that should be taken lightly, so you can get the most out of your paint and preserve it to last longer by applying the listed methods.

Make sure to thoroughly inspect the car for irregular paint since this might cause rust to form in the long run.

How can rusting be prevented?

Rusting can be prevented by thoroughly washing your car from salt in the winter, keeping the moisture level low, and applying protective coats to increase the longevity of the paint.

What causes cars to rust?

Moisture and water reacting with the oxygen at the surface of the car’s bodywork cause the car to rust.

What cars rust the most?

Cars that were built before the use of rust-resistant materials are the most prone to rust, and some of the most notorious models in that sense include Ford Fiesta, Toyota RAV4, Land Rover Range Rover Sport, and Jeep Wrangler, mostly in older generations.