A/C only works when driving 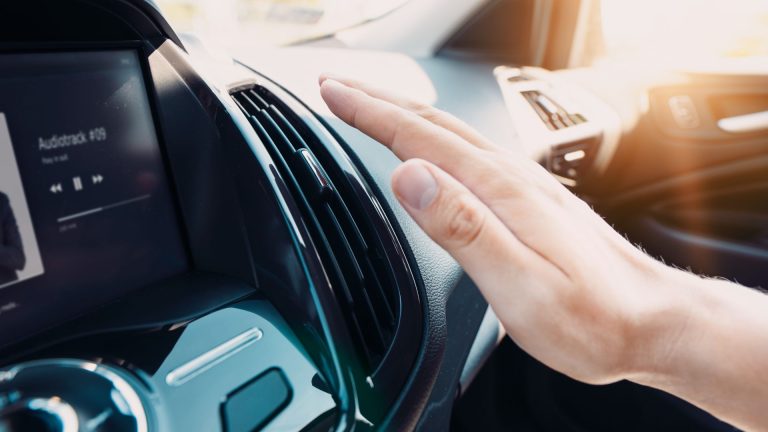 Imagine the following scenario – you sit in your car on a hot day and drive regularly with the A/C working, just to see it push hot air into the cabin when idle. To make things even more confusing, it will probably start cooling down the cabin air once you get back on the road.

So, what’s the culprit behind the problem if your car’s A/C only works when driving? Well, there are several possible scenarios, and most of them involve a problem that affects the condenser fan operation. Luckily, our team dedicated this guide to figuring things out when it comes to this type of problem, to cut your worries and time spent on finding the solution.

How does the car A/C blow cold air?

Before we get into the probable causes, it’s time to deal with the mechanics behind the A/C cooling, so you can understand everything a bit better. The first key component of the system is the A/C compressor that gets driven by the serpentine belt.

So, once the engine reaches operative temperature, the motion of the belt engages the A/C compressor’s clutch. It gets the compressor to, well, compress the low-pressure gas into a high-pressure gas.

That high-pressure gas enters the condenser which cools it down with the help of a condenser fan and this results in the refrigerant changing state from gaseous to liquid. Once it’s in a liquid state, the dryer takes away the water from the refrigerant and pushes it into an expansion valve.

If your A/C only properly cools down the cabin air while you are moving, the most common reason for this is a faulty condenser fan. If the fan can’t do the heat transfer via the fan that blows onto gaseous refrigerant, the process can’t continue and you won’t receive cool air.

However, forced air can also cool down high-pressure gas, and it mostly happens if you are driving at a higher speed. Air that breaches the grille and the radiator opening could easily replace the condenser fan. This way, the heat transfer is conducted even without the need for the fan blowing, and that’s the most likely reason why you are getting cool air while driving.

To put this to a test, you can start your car and let the engine run for about 10 minutes. It’s more than enough time for it to reach operative temperature, so make sure to turn on the A/C to the cold setting. If you only receive hot air from the vents, while the A/C seems to work as you drive, a faulty fan is likely the culprit.

Coming to a stop after driving for a while will tell you for sure since you’ll probably only get hot air in the cabin at this point.

Main reasons behind A/C cooling only while driving

To get you completely geared up to tackle this issue, we’ll go over all the main possible causes behind this problem. While a faulty fan is usually the culprit, there are a few other possibilities. The fan itself might not be the source of the problem, but it could rather be affected by another faulty component.

Either way, here’s a brief overview of the main problems leading to A/C cooling down cabin air only when moving:

One of the biggest problems is finding the exact part of the condenser that’s malfunctioning and potentially disrupting the condenser fan operation. Sometimes, it’s easier to just replace the condenser along with all the parts in it than to tear it apart from the inside and look for a faulty component.

Still, you might be lucky in case the culprit behind this issue is simply a bad fan resistor, which can easily be replaced.

One of the best possible scenarios is if the faulty fan resistor causes the fan not to blow when it should. To check this, start your car, let it run for a few minutes, and turn the A/C on at the full blast. Next, pop up the hood and remove the intake so you can access the condenser fan resistor.

It’s a small housing on the opposite side of the intake and just above the condenser fan. You can follow the fan wiring and trace it back to a small plastic housing to find the resistor. The role of this part is to send voltage to the fan once it senses heat building up within the condenser. This way, the fan activates and cools down the gaseous refrigerant, turning it into liquid.

Regardless of the blowing speed setting, if the resistor works properly, the fan should be turned on. You can fix this problem by simply unscrewing the bolt holding the resistor housing and replacing the part. You can do it yourself without help from the mechanic, and the only thing you should be careful about is picking the right type of resistor for your particular model.

The problem could also be in the condenser blockage, in case it wasn’t cleaned for a long time. Some dirt and debris will inevitably accumulate over time and clog the condenser. Not only does it restrict the airflow into the cabin, but it also negatively affects the texture of the refrigerant.

So, the only reason why some cool air might be reaching the cabin as you drive is that forced air that we mentioned. It’s only due to cool air entering the system due to high driving speed, but it won’t last for long and will surely stop as soon as you reach the first traffic light.

Problems with the A/C compressor operation

You don’t need to experience signs of a bad A/C compressor for the compressor to give you troubles with A/C working only while you drive. Like the condenser, the compressor itself might be blocked and dirty and that might prevent it from pushing the refrigerant through the system.

You can test this by lifting the hood and visually inspecting the compressor. If it seems dirty or muddy, you can carefully pressure wash it. If you do this, just make sure not to spray water directly on the condenser, but rather spread it to prevent damaging the part.

One thing that’s not usually the case but deserves checking out is the refrigerant level. If there’s not enough refrigerant in the system, it might not move through the system until the forced air enters the system. It’s also possible that refrigerant leaks could occur and this results in hot air blowing into the cabin.

Overall, the most likely culprit is the faulty condenser fan, but it’s also worth checking the resistor, wiring, compressor, and refrigerant level along with possible blockage.

Ultimately, if your car’s A/C only works when driving, there are a few options you could consider. The best thing is to check the condenser fan and look for possible blockage. You can inspect the fan visually, and if it isn’t working, that’s the most likely reason behind this problem.

You can go ahead and check the refrigerant level and the A/C compressor for dust and dirt clogs just to be certain.

Why does my AC not work when idling?

Your A/C might not be working when idling if the condenser fan isn’t working, so forced air gives you some cooling while you are driving.