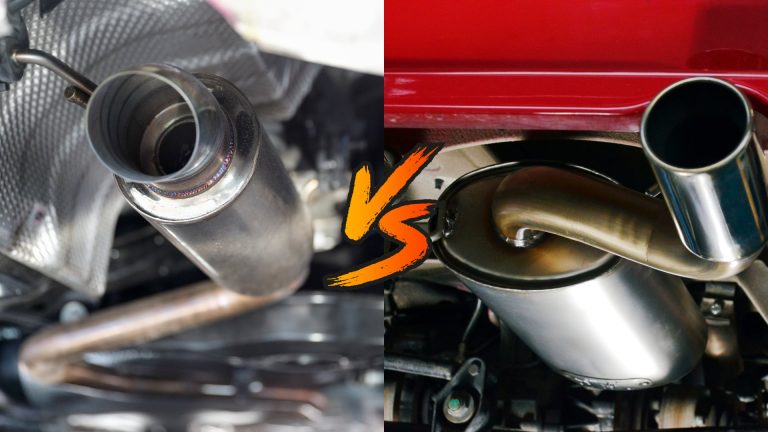 An incredible exhaust sound makes an excellent signature for your car. A lot of engineering goes into making the exhaust sound as appealing as it comes.

To get the right sound from your exhaust, the resonator and muffler of the exhaust system must be in good harmony. And though they work together, they are two completely different substances. The resonator modifies the sound frequencies of the combustion process while mufflers quiet down unpleasant exhaust noise.

This article explains the difference between these two components and why you can not have one without the other.

How does a resonator work?

The sound the engine makes during combustion is not a pleasant one. That is why the resonator exists, to change the noise to something nice to the ear.

The resonator works by removing the engine’s buzzes, hums, and high-pitched noises, making it smoother. It does not change the volume of the machine in any way. The sounds the resonator emits are made to be of a particular frequency which cancels themselves by bouncing inside the device.

How does the muffler work?

The muffler consists of carefully arranged channels, tubes, and holes that aim to reduce exhaust pressure by directing the gasses entering it. The reduction of exhaust pressure dampens and quiets down the engine’s sound.

What is the difference between the resonator and muffler?

Resonators change the sound of a car engine to a fine-tuned pleasant sound, while mufflers lessen the volume. They are used together to cause an enjoyable and less loud engine sound than what comes out of the exhaust. You can use them separately, but the desired output is only obtained when used together.

How do the resonator and muffler affect a car’s performance?

The muffler works with sound pressure, creating back pressure or restricting exhaust flow. Therefore, it slows the engine in a negligible way.

Resonators also restrict exhaust flow. However, unlike the muffler, its effect on the engine is pretty apparent. The restrictions that the resonator poses to the flow of the exhaust gasses reduce horsepower and torque considerably.

Can my car work without a resonator?

Your car can work without a resonator since the device is not crucial for the starting or movement of the vehicle. However, the sound your engine would return to you with the resonator being absent is enough to put you off from driving your car. The sound would be loud and obnoxious, disturbing the passengers in the vehicle and other motorists and pedestrians.

Furthermore, if your resonator is not working, you will have the check engine light on a continual glow.

Can I drive without a muffler?

You can drive with only the muffler available, but the ride would still be a very uncomfortable experience for the ears. When the resonator is open, the muffler can do its job well since the sound it gets to what work is already tuned to the right frequency.

What will happen if I remove either the muffler or the resonator?

You can drive without the resonator or muffler, but your ride comfort will be greatly reduced due to the engine’s noise.

Removing the resonator will give you more horsepower and torque and also change the sound of your car. More horsepower means more speed which can come in handy during races.

However, deleting the resonator would require removing the muffler, as the muffler would be almost useless. The resonator fine-tunes the sound before the muffler dampens it, which gives the entire system its success. Therefore, the muffler working on its own does nothing significant.

If removing the muffler wasn’t illegal, driving without it is more manageable than going without a resonator. The reason for this lies in how they work, in which the resonator’s part is more concerned with the beauty of the sound.

Which one is louder, deleting the resonator or the muffler?

Does removing the resonator or muffler affect fuel economy?

As a by-product of fine-tuning engine sound, the resonator discourages the faster movement of exhaust gasses. Deleting the resonator improves exhaust gas movement as there is no obstruction. The improved gas flow decreases fuel consumption and increases the efficiency and performance of the vehicle.

The muffler, on the other hand, does not affect the fuel economy. It is only a service to society, reducing the potential noise pollution that would be evident if the engine is left to roar uncontrollably.

When do I need to replace my resonator or muffler?

Like every other part of a vehicle, the resonator and muffler are prone to spoilage. Including the exhaust system as a vital part of your maintenance schedule is essential, so you know when a replacement is due or necessary.

Here are signs you should look out for to know when you need to replace your resonator or muffler:

A malfunctioning or leaking resonator will release stinking hazardous fumes. Having your resonator checked and replaced when you notice this smell is crucial for legal and health reasons.

If you perceive a burnt smell or notice plenty of smoke leaving your tailpipe while driving, your muffler could be damaged. Whenever this happens, waste no time taking the vehicle to the mechanic so they can change your muffler or solve the problem. The fumes could be carbon monoxide which is fatal when breathed in long enough.

A damaged resonator or muffler will change your vehicle’s sound, making it louder. The more the damage, the more boisterous and altered the sound becomes. The noise is usually most noticeable when cranking the engine or accelerating.

When you notice that your fuel efficiency reduces with a reduction in overall performance, it could indicate that you need to change your resonator or muffler. The fuel wastage results from the engine’s extra work to get enough compressive force when the exhaust system is not working as it should.

In extreme cases, the engine will stall and refuse to start when the resonator has issues. Though the resonator failure may not be the car’s main problem at that point, it is worth checking and replacing, too, as it may be a significant contributing factor.

The average muffler lasts between three and five years. Therefore, you should remember to replace your muffler every four years. If you seek a more budget-friendly approach to muffler replacements, you should consider going to custom muffler shops.

Custom muffler shops manipulate replacement pipes to make or replace exhaust system parts. You would not need to completely replace your exhaust system, which can be expensive depending on the model and make of your car.

What will happen if I don’t replace my resonator or muffler on time?

A damaged muffler affects the engine, reducing performance. If your muffler is broken, the car will not be able to siphon exhaust fumes as efficiently as it should. The result is a reduction in fuel economy and higher emissions.

Similarly, a faulty resonator can cost you your engine as it can bundle up with other problems, making your engine come to a standstill. Consequently, you would not pass your emissions test with a broken muffler and resonator. You also risk getting arrested for causing noise and air pollution.

Having these two components faulty in your exhaust system not only puts you at risk of being convicted for pollution but also threatens your health. Carbon monoxide, a common by-product of resonator and muffler malfunction, is poisonous to humans at the correct dosage.

The resonator and muffler are critical ingredients for a powerful and excellent exhaust sound. The resonator changes the sound of the engine to frequencies more appealing to the human ear while the muffler dampens the noise, releasing a softened soundtrack. They can be used separately, but the effect would still include noise.

You should never forget your obligation to the environment and keep your muffler and resonator functioning properly. Doing so will keep you from being a law offender and preserve your health.

Does a resonator make a big difference?

The resonator makes a big difference as it is directly responsible for the sound the exhaust gives. Without it, the muffler will still give out the original engine noise, which is unpleasant to the ears.

What comes first, muffler or resonator?

The resonator comes first because it fine-tunes the engine noise to something usable. The muffler’s job is to reduce the volume of the engine noise, releasing sounds that the human ear can bear.

Will removing the resonator affect performance?

Does removing the resonator make a car louder?

Removing the resonator will make your car louder because there will no longer be fine-tuning of the engine’s noise. The vehicle will also be lighter and faster but at the cost of loud, jarring obnoxious noise.