How long does it take to replace motor mounts? 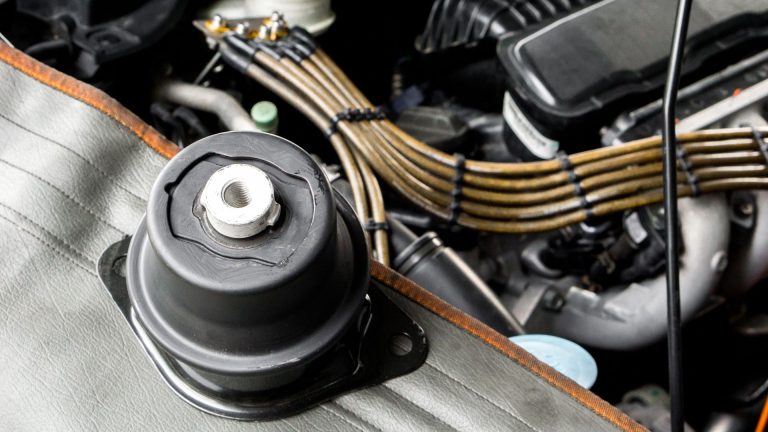 Motor mounts are important vehicle parts that hold your engine firm and secured to the subframe. They require a timely replacement, so you don’t feel engine vibrations and clunking noises. So, it’s no wonder that many drivers are wondering – how long does it take to replace motor mounts?

It takes from 30 minutes to four hours to replace motor mounts, and it mostly depends on their accessibility. It’s a delicate task, so this guide will lead you through it as we elaborate on important factors of replacing motor mounts.

What are motor mounts and why are they important?

The motor mounts, also known as engine mounts, are parts that fix your engine in place and ensure it’s solid as you drive. However, these parts consist of rubber layers that are known to wear off, so the connection becomes loose.

At this point, you might hear a clunking noise as you put your shifter in and out of gear. Also, the torque output will affect the engine to go back and forth, and this shouldn’t happen. The inside bolt is surrounded by rubber that keeps the engine from vibrating, and this is the most common issue.

Once the rubber or the thin layer of silicone on the side of the inside bolt rips off, the mounts won’t be able to hold the engine in place. This causes frequent vibrations while driving, and you might even experience that your car shakes when braking or suddenly accelerating.

It can be a serious issue since the engine parts could suffer from all the vibrations and moving, and the only solution is to replace the mounts with new ones.

Accessibility of your car’s motor mounts

The time frame between half an hour and four hours might not suffice for those that are in hurry and just wish to get mount replacement over with. So, you should use your car’s manual and inspect the pages with vehicle repairs.

You might be able to see the location and accessibility of your car’s motor mounts since it’s different for various makes and models. It will also tell you if you can replace the worn-off mounts yourself, or if you need to visit a professional mechanic.

For instance, most Ford models have widely accessible engine mounts, so you can even replace them yourself within an hour. Check the specifications for your model, and you should be able to find one mount under the coolant reservoir.

Move the reservoir out of the way, and you’ll be able to access the bolts. However, there’s another problem that emerges at this point. You can’t just pull the mount out, since it holds the motor in place. If you remove the mounts, the engine will fall. So, make sure to use a jack to firmly attach to the oil pan and it will hold the engine in place as you replace the mounts.

The second mount is usually below the air box, and the back mount often goes bad along with the front one. So, replacing both can solve your issues, and it shouldn’t take more than one hour to do it yourself. Make sure to properly re-attach the air filter once you finish tightening the mount bolts.

Now that you know it takes from half an hour to four hours to change the engine mounts, it’s crucial to do the job on time. But, how do you know when to replace motor mounts? Here are some of the main signs that your engine’s mounts have gone bad:

If you hear a clunking noise when braking alone, it might not be a sign of bad motor mounts. It could also be a matter of loose bolts, but if the noise continues as you start the car and drive it, you should check the mounts.

Also, clunking noises can be heard from the engine compartment area, so this shouldn’t be ignored. Driving vibrations are also a clear sign, and you should differentiate between steering wheel vibrations and car vibrations coming from under the hood.

Finally, you’ll notice a sound similar to an engine misfiring as you change gears. It can be heard on both manual and automatic cars, and it’s a bit easier to check it on automatic vehicles. Have someone open the hood and observe the engine as you switch from neutral to drive.

If the engine moves too much and produces a noise, chances are that you are dealing with worn-off motor mounts. From this point on, it’s just a matter of accessibility when it comes to the time needed for doing the job.

What happens if you don’t timely replace motor mounts?

If you spot any of the listed symptoms, don’t waste any time and head straight to a mechanic. If you don’t replace motor mounts on time, it could only cause further damage to engine parts. Just the sound of it alone is enough to seriously frighten you.

If you don’t replace the mounts on time, engine parts won’t be attached to the subframe properly. This causes all kinds of movements, especially at higher speeds as the torque kicks in at its peak. So, the noise below the hood can be unbearable, and the worst thing that can happen is engine fault.

All that movement in the engine bay zone just causes damage to engine components, and might even cause oil leaks. If you drive with bad motor mounts for a long time, you might end up having to do a complete engine rebuild in a worst-case scenario.

The best tip is to replace motor mounts yourself only if they are widely accessible. If not, it’s better to pay a bit more to be certain the job was done correctly by a professional.

Overall, this guide answers the common question of “how long does it take to replace motor mounts”. Hopefully, you also got to learn something about the signs and consequences of bad motor mounts, as well as how to replace them yourself.

All the engine components require timely replacements to ensure proper engine operation and avoid having to deal with misfires and clunking sounds.

Are motor mounts easy to replace?

Motor mounts aren’t easy to replace, but sometimes the job can be done within an hour if they are easily accessible.

How long does it take to replace a motor mount?

It takes about half an hour to replace one motor mount if it’s accessible and you don’t have to pull out the engine mount assembly just to replace it.

How much will it cost to replace motor mounts?

It costs about $100 per motor mount on average, but if you also include the price of labor for the mechanic, it can raise to $1000 or even more based on the model.

Can I replace my motor mounts?

Yes, you can replace your motor mounts but only if they are accessible and you can reach them without pulling the engine out from the bay.

Do I need to replace all four motor mounts?

You don’t need to replace all four motor mounts if only one of them goes bad, but the life span for these parts is mostly the same for all mounts. So, at least make sure to check the condition of the others.