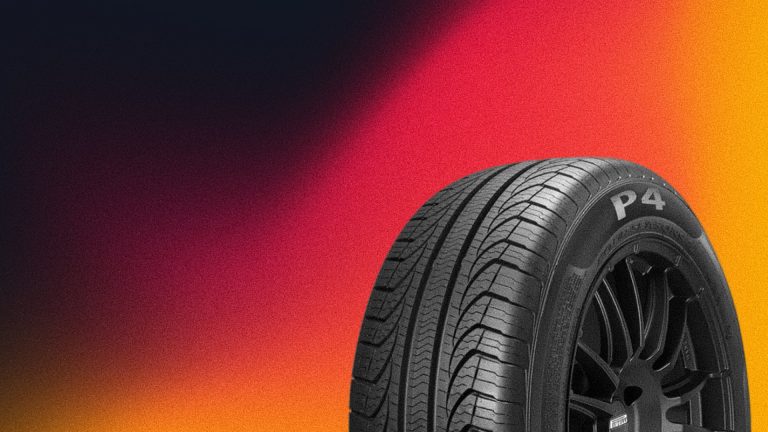 There are several reasons the Pirelli P4 Four Seasons Plus is a perfect fit for your vehicle, and we’ll be pointing out some of the eye-catching stats of the all-season explorer.

Efficient Longitudinal Grooves: Unlike some poorly designed tires, the Pirelli P4 Four Seasons Plus possesses wide and efficient longitudinal grooves that maximize water expulsion. The effect of this is the reduced risk of hydroplaning. Tires without highly efficient grooves found on the Pirelli P4 Four Seasons Plus have poor traction on wet roads as there is no pathway for water to pass through. For this reason, they provide poor handling and braking, which can lead to crashes.

Reinforced Shoulders: Pirelli’s P4 Four Seasons Plus has reinforced shoulders that give it excellent stamina and further improve mileage. Also, the shoulder blocks are designed with compounds that promote even wear, extending tread life and improving fuel economy.

Irregular Angle Grooves: The angle grooves improve the tire’s ability on wet roads by performing the same purpose as the longitudinal grooves. It also gives the tire impressive snow traction, allowing for a strong mechanical grip that improves handling and steering.

Driver safety is a priority; thus, vehicle parts are given dedicated attention and detail to ensure they don’t malfunction. The longitudinal and angle grooves ensure driver safety by managing water flow beneath the tire. Moisture trapped under the tire can cause it to lose traction and slide. The process where the tire loses traction on wet roads is called hydroplaning. The grooves check hydroplaning by expelling water through them to ensure that the tire has unhindered contact with the road surface.

Also, the Pirelli P4 Four Seasons Plus is designed with an optimized casing and formidable internal structure that comprises twin steel belts bolstered up by spirally wrapped nylon. The tread compounds strengthen the tire, making it resilient against terrains and objects that cause punctures.

All tires have different speed ratings reflecting the maximum speed they can function. A tire’s speed rating does not mean it can’t run at a higher rate. It means that exceeding the speed rating of a tire does not guarantee its optimal performance. Also, this can put the driver at the risk of crashing.

The Pirelli P4 Four Seasons Plus has H, T, and V-rated tires. The H-rated tires can function properly up to 130 mph, T-rated at 118 mph, and V-rated at 149 mph. Drivers can find the speed rating of their tire on its sidewall. It is usually denoted by alphabets and has speed ratings ranging from 3 mph to 186 mph.

Important factor drivers put into consideration when opting for tires for their vehicles is their ability to last longer and wear slowly. No one wants to spend money on buying new tires on short notice. For this reason, Pirelli has designed the P4 Four Seasons Plus to deliver excellent tread wear.

The tire’s internal structure includes twin steel belts reinforced by spirally wrapped nylon that delivers long wear. Its polyester cord body plies are strengthened to engage even wear. Also, the Pirelli P4 Four Seasons Plus offers 65,000 to 90,000 miles of road coverage. However, this is dependent on the tire’s speed ratings.

Pirelli uses the traditional Tread Wear Indicator (TWI) for the P4 Four Seasons Plus as a maintenance indicator. The traditional TWI employs tread depth estimates to point out when tires are no longer safe for road use. When tires exceed the first 2/32 inch of tread depth, they deteriorate in performance on wet roads because they no longer have traction for such road conditions.

It is necessary always to have your tires inspected for signs of wear to avoid problems that arise from using a worn-out tire.

The Pirelli P4 Four Seasons Plus is a great all-season tire that boasts excellent traction in diverse road conditions. Its traction performance on wet, dry, and snowy roads makes it a suitable option for drivers in areas that experience the full seasons of the year. How does the Pirelli P4 Four Seasons Plus handle traction? We’ve explained below how these beauties take traction in wet, dry, and snowy weather.

Driving in the rain is a terrible risk because an inefficient tire’s footing can get compromised due to poor traction on wet surfaces. The Pirelli P4 Four Seasons Plus overcomes this risk with the possession of central longitudinal grooves and angular grooves that expels water that sticks to the tires and causes them to slide. The longitudinal grooves are well-defined and wide enough to carry out this task, thereby improving the tire’s grip.

The optimized tread pattern of the Pirelli P4 Four Seasons Plus gives it an excellent grip on dry roads. Handling and cornering are impressive and surpass the performance of some other tires in its class. Also, its advanced shoulder blocks reduce the tire’s braking distance.

Although not as efficient as winter tires, the Pirelli P4 Four Seasons Plus has a great traction performance on light snow. Its angle grooves provide a mechanical grip that improves steering on snow roads.

It isn’t very pleasant having to speak at the top of your voice while driving. The tires are sufficiently light on the road and produce little noise that will not interfere with the driver’s voice. The Pirelli P4 Four Seasons Plus also uses an optimized casing profile that delivers impressive comfort by reducing vibrations felt while driving.

A Pirelli Cinturato P7 All Season purchaser is eligible for this warranty if the Pirelli tire becomes unserviceable due to craft or material defects within the first year from the date of purchase or within the first 2/32″ of the original usable tread. Whichever occurs first, Pirelli will have them replaced with an identical or comparable Pirelli tire at no charge to the owner, including mounting and balancing. However, this Limited Warranty does not cover miscellaneous fees and taxes.

Pirelli provides road hazard coverage on Pirelli Original Equipment Tires and Replacement Tires that are censored or manufactured with Pirelli Run-Flat technology. If a Pirelli Run Flat tire becomes unserviceable due to road hazard damage within

the first year from the date of purchase, or within the first 2/32″ of the original usable tread,

whichever occurs first, Pirelli will have them replaced with an identical or comparable tire at no charge to the owner.

We can’t deny that the Pirelli P4 Four Seasons Plus is an impressive all-season tire with many features and qualities that guarantee driver satisfaction. In addition, it provides as much as its more expensive alternatives giving it an edge over them.